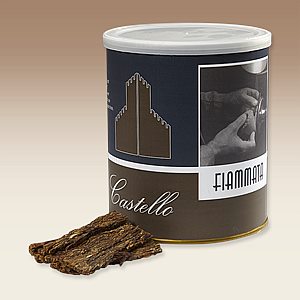 A Virginia flake with just the right amount of Perique added to deliver the ideal complement to an afternoon or evening cappuccino.

A full tasting VaPer, though I suspect the possibility of a touch of burley is present. The perique is a mild condiment, and doesn't offer much spice, though it is a little plumy with a few traces of raisins. The Virginias are earthy, grassy, dark fruit, with a little citrus, and is hay-like with boldness as the major player. It's not very complex, but it does have a medium nic-hit. Won't bite. Slow burning at an even rate with a mostly consistent flavor, and stays cool, though it's slightly harsh at the end. Leaves little moisture in the bowl, and needs just more than an average number of relights. Has a decent after taste. Not an all day smoke. Really more of a two and half star blend, but I give it three because I just don't think it's a two star tobacco.

Fiammata is among the 4 new "Castello" blends which were a "must have" for me as a Castello pipe collector. Somewhat puzzled by "DK's" review, and what kind of weed he got(accidently?) for the first trial, I cracked my Fiammata tin (tinning code/date: 080613) first.

Smell: This is without any doubt straightford VAPer, indeed ! ...somewhat hay/grassy, but dominated by the smell of fresh baked sourdough rye bread and some dried fruit. Bingo ! It IS a VAPer, as per the tin description... Phew !

Smoking: Charring... yep, this is a straightforward VAPer !

Fiammata is something else... OK, in any case it carries a typical C&D Virginia taste "fingerprint", full, massive, more "earthy" than overly sweet, etc.. In short, I think the Virginia basis is C&D's in my view fabulous 'Opening Night'...plus some possibly deliberatly well chosen pinch of Perique, and ready is Fiammata ! So, most likely no "rocket science" in tobacco blending, but a very pleasing result. The Perique "rings the door bell" down the bowl, but never overpowering. What remains is a very enjoyable blend, dominated by the fascinating Virginia constituent. Well done ! A "spicy" and "creamy" taste, more on the "dark" side rather than being "bright" and therefore medium sweet... never annoying tongue or mouth, however along with a certain strenght.

In conclusion, Fiammata is a nice addition to other well known and established VAPer's in the marketplace, without much of "me too", hence stands for ist own, and therefore worth a trial. It smokes very fine, and you don't necessarily need to own a Castello Fiammata grade pipe to enjoy this tobacco ;-) ! I'm glad I pressed the "add to cart" button.

Remark: Fiammata goes also well along with a glass of red wine, if "evening cappuccino" is not your cup of tea... ;-)

I've had this in my cellar for about four months now, and was in the mood for a new VaPer to start the day with. The tin description concurred with my wants, but puzzlement ensued after flicking through the reviews earlier to find a few Burley comments. But as I'd already popped it I carried on and filled my morning bowl!

First thing: my blend looks NOTHING like the one pictured here. Alright, it's the same colour, but that's like saying because I have a head I'm Frank Sinatra's double! This is a very broken flake, to the point of being more like really thick ribbons. I doubt even the most arduous journey would turn the flake that's pictured into what I have. But, I guess that's not really a 'fault'.

Perfectly moist, so this enables easy ignition. Now, as good as the burn is it's too fast; my Friday Altinok Lee Van Cleef meerschaum could do with having a larger bowl to get more tobacco in! On to the flavour: having read the few Burley comments it had me looking very deeply. There's a very slight rustic note, but not enough to suggest an addition of the leaf. The Virginia comes across the strongest for the initial part, but this is quickly caught up by the Perique. After the first quarter I find the Perique the more formidable of the two, developing more spice. With the burn, I also find it too hot, and the smoke becomes quite bitey.

I don't find the room note that unbearable, and the nicotine's above medium.

This isn't bad, but has a few too many faults to get any higher than two stars.

This one still hasn't settled down. Very strong burley-ish, which C&D is known for, but the base is supposed to be Virginia. A very earthy Virginia, apparently. I've known VA's to show some earthiness but never to this extent. Two stars is still the best I can muster for this one.

Received a new tin, dated September 8. The bad news is that this tin tastes like the first batch I got. Heavy on the burley-ish taste, extremely limited sweetness from the VA that I'm told is in there but can't confirm through smoking. The perique is present but pretty subdued. This is a raggedy blend, very rough, and not just around the edges. Nothing like C&D is capable of with respect to their VaPers. I smoke and enjoy a lot of their stronger blends such as Kajun Kake and BF #3, and this leans heavily in that direction. Not a bad blend, but I think I was just expecting something more of a traditional VaPer with a C&D flair, and this one fails in that attempt. I'm wondering if Fiammata just needs some aging time in the cellar. I'm putting this away for at least six months to give it time to settle down. As of now, my "somewhat recommended" rating is more than enough. But there may be a good blend in there somewhere - crossing fingers!

Sometimes I think that the reason I stink at blind tobacco taste tests is that I've smoked so many different tobaccos and I get confused and pick the wrong one when guessing the mystery blend. However, this one was so decidedly C&D-ish that I was surprised when I was told it was a Castello blend. Didn't know Castello blended tobacco and if it were sourced out, I'd assume Orlik or K&K or some Euroblender. Now I come here and find out that C&D did indeed blend this one. Maybe I don't stink as much as I thought.

The trouble is that I guessed this one first as Burley Flake #1 and then backed off and said Bayou Night. Oops - I guess I do stink as bad as I thought. Unfortunately, this one, as a VaPer, is so rough that it makes Bayou Night seem like a pussycat. There was an underlying sweetness but it had to be coaxed out. Mostly what I tasted was burley, and it makes me wonder if C&D didn't put BF #1 in my tin by mistake. Or at least a very young version of Bayou Night. This blend was deeply earthy, hardly sweet at all and showed only a whisp of perique saltiness (no plums, raisins or even pepper - just salt). The "burley" that apparently doesn't exist in this one was 85% of the flavor. Makes me think they plopped the wrong blend in the wrong tin. If not, this is a very temperamental VaPer that shows nothing of the excellence that C&D is capable of - witness their Bayou Morning blend, which is sweeter and gentler than Bayou Night but with tons of flavor. I may buy a tin of this to see if what I got was the real deal. This wasn't bad as it was but as a true VaPer, no thanks. I'll update this review when I buy myself a tin and finish it.

Because I am not willing to pay the price even on the estate market I don’t own a Castello pipe, I decide to try their tobacco. It is an okay Vaper with what tastes to me like a relatively small amount of Perique and a bit of burley undertones. Smokes well with a moderate pace and no bite but a somewhat subdued taste. Not the best Vaper but worth trying at the price.

A slightly above average VaPer. The Virginias seem to be mostly Reds. Has all the flavors you would expect. Dark fruit with ample spice and sweetness. Some tart and tang. I think a small amount of the sweetness may be an addition. It can burn quick and warm if you don't mind your pace.

Medium in body and taste. Added sweetness at extremely mild. Burns maybe a little too well.

I smoked the entire lineup of Castello blends years ago when they started coming out. I'm told that Castello wanted a range of tobaccos that would appeal to smokers of all types of tobaccos. I don't recall the blend, but this newer Fiammata blend was created by C&D and it took me awhile to get one. A not too strong Virginia/Perique compilation that displayed quality Virginia leaf and the Perique was applied with a firm, but restrained hand. For the price, an excellent bargain.

I'll start with the fact that I love Castello pipes. That lead me to try the Castello blends made by C&D.

This is by far my favorite of their blends so far. An above average VaPer which smokes great is quite spicy. It's not the best VaPer out there, but probably is better than most.