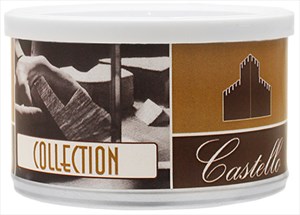 A blend of aged red and bright Virginias perfectly balanced to produce the exact combination of natural depth, sweetness, and tartness for seasoned Virginia tobacco lovers.

Notes: This is a blend of flue-cured Virginias. 2013 IPCPR release.

This blend is like drinking ice cold spring water. Nothing special about it, really, but it can really hit the spot and you can't figure out why. It's a simple blend, nothing too complicated, and yet has a very nice taste. I guess this was exactly the point while making this blend: keep the natural tobacco taste. The taste is somewhere between grassy and nutty. One can really taste the Virginias, but can easily wrongfully sense some burley in there. As a Burley lover, I liked that, but I guess it's like buying a Bordeaux wine and finding out it tastes like a Rioja. Nicotine-wise, it could be better. I didn't feel at any point a nic-hit, nor even a nic-pet for that matter. I don’t smoke for the nicotine, but for those of you who are – you might want to add some Burley to it. It burns rather hot, which is fine – the hot smoke really compliments this blend as you don't mind the fine, mild taste. It won’t bite, not even a little, and will require very few (if any) relights. It has a medium body, which is nice for a straight-Virginia ribbon-cut.

All in all, it's a nice blend. Although, if you're expecting a Straight Virginia, don't expect much of it. If you're a Burley lover, you might have a nice surprise.

Golden brown clumpy chop cut ribbon with a tea-like tin nose. Lit easily and burned quickly with a surprising amount of nicotine for a straight Virginia. Made by C&D but I don't know if this is a C&D or a Castello recipe. Reminds me vaguely of C&D Briar Fox with the non-sweet VA flavor, but this one veered too sharply in that direction. Somehow the blender managed to leech out, process out, or otherwise remove most of the Virginia leaf's sweetness and tang for a more "cigarette" approach. Flavor-wise, it seemed that this had some Kentucky in the mix but it lacked the body I associate with that leaf. But it behaved rather like a burley and less like a Virginia.

Puffed at a normal slow pace, there was just a hint of sweetness and even that ebbed away much of the time. The predominant flavor was plain tobacco that leaned heavily toward the burley side of things, with that pervasive cigarette feel. More thin in body than your average burley, however. It also reminded me of Ogden's Gold Block but it's been too long for me to be sure. This might make for a good blending tobacco to tone down heavily-flavored or heavy bodied blends. Smoked by itself, it failed to elevate itself beyond "just ok". Puffed vigorously to see how it performed under pressure, it never got too feisty but it did turn rather bitter and gave me a pretty good case of the "niccups". As a burley would. No tongue bite from the over-exertion, just excessively warm on the tongue... again, my experience with burley. The blender claims this is just Virginia tobacco and I suppose I believe them, but it doesn't smoke much like it. The Castello blends I've tried (both of them) are largely let-downs, but do try this one if you're curious about a very much non-sweet and non-tangy blend.

I like to have a few different genres in my rotation, like most of us here. With the UK being so darn hot, and me liking a straight VA in the heat, my tin of John Aylesbury 'Virginia became depleted. So, I cracked this open. A nice summer smoke.

It contains a fair few 'stubby' ribbons, don't expect long cords or broken flakes. The mixture comprises 50/50 medium to light browns, and being an unflavoured blend it smells as you'd expect; like a straight Virginia!

I favour red Virginias to bright as I don't find the sharpness, liveliness, of a straight bright too agreeable. The amount of red in this is just enough to assuage any sharpness and sweeten the profile. It isn't a heavy, fruity, red Va cacophony, instead it's nicely balanced; the acetous brights are rounded and placated by the sweet reds. It burns at an average speed, and only becomes warm when chugged. But, in this hot weather a cold lager's a good friend to have to hand, anyway!

Collection? A nice smoke for this perilous heat! Happily recommended:

The mildly earthy red Virginia is just a little dark fruit sweet and hardly tangy. It's rather flat. The other Virginias offer a touch of grass, a slight bit of earth, not much citrus or other sweetness. It has no depth of flavors or taste, and is a very unobtrusive all day smoke. The nic-hit is mild. Won't bite or get harsh. Burns a tad slow with little moisture left in the bowl, and requires a few relights. The flavor is fairly consistent. Has an okay after taste. It may do for the smoker who wants a mild all day Virginia to smoke without thinking much about it.

The Brights have the most influence in the first half with sweet hay and citrus. The Reds have the most influence in the second half with some tart darker fruit. Makes for an interesting smoke. There is just a touch of sharpness on the retrohale which is mildly distressing. That's a shame because it taste pretty good. About a 2.5 smoke for me. I'll round up because I'm a nice guy.

Mild to medium in body and taste. No added flavoring. Burns very well.

I smoked the entire lineup of Castello blends years ago when they started coming out. I'm told that Castello wanted a range of tobaccos that would appeal to smokers of all types of tobaccos. This year 2013 compilation by C&D was not a part of the original release blends (and forgive me, I can't remember the blender of those). It was awhile before I was able to obtain Collection and the broken up ribbon burned a little fresh an warm to me. The taste was middlin' and not much strength. Not a bad smoke for me but not really an impressive one either.