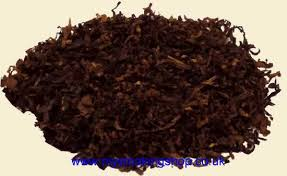 This blend is made from 'a little bit of everything' , the bits and pieces of tobacco left over throughout the manufacturing process. Flavoured with an aromatic scent. The blend does vary from time to time.

One to try, a great mild to medium smoke.

One of the hardest blends to rate because you’ll never know what components will be in the blend. In what I tried, I got a pretty decent Lakeland hit with some kinds of fruit toppings as well. They toned down the tobaccos a bit, but I tasted some grassy, earthy, citrusy, dark fruit Virginias, and a light toasted, nutty burley. Didn’t bite or get harsh. The nic-hit was mild to medium. Burned cool and clean, and a little slow with a wildly inconsistent flavor. Left a little moisture in the bowl, and needed some relights. The after taste was okay. It could be an all day smoke. As it’s a jumble, left over blend of various other blends, it’s difficult to recommend to others.

Hmmm. I'm in a minority here, it seems; people whose opinions I respect are giving this stuff five stars! I tried it out of curiosity; didn't like it at all. The heavy casing is added, I'm guessing, to give some sort of continuity to a tobacco that otherwise would never be the same twice; but the casing - the “bubblegum” flavour – is far too heavy for me. Also, for what is, after all, only a collection of leftovers it isn't all that cheap. In my opinion, smoking this isn't worth the small amount of money you save. You might as well buy something decent and smoke less of it. Maybe it's just me, but I wouldn't recommend it.

I would be readier to recommend it if G&H were to drop the casing and let the tobacco stand on its own, or at least use a more suitable agent than the one they currently do use. This would be the end of uniformity, but so what? - it's sold as a 'pensioner's mixture' after all, and I would much rather have a tobacco that was different each time than one that came with that truly awful flavouring applied to it. Given what it is, one might fairly expect it to be a little cheaper, too. A 'pensioner's mixture' is a nice idea, but it could be much better executed than here.

I'm not sure how often G&H gathers up its "sweepins" and makes Pensioners Mixture out of the various leftovers, but my sample came from a friend overseas and was fairly dry upon arrival. Loaded up with a Lakeland style scent and the leaf was pressed and mostly broad cut. Best part about this one was the flavor. Like Gump's box of chocolates, you never knew what you were gonna get with the next puff. Absolutely fun. And boy, is this stuff strong!

* It is my understanding that one can't nail down the presentation of Pensioners Mix with clarity for those to purchase in future years because the floor sweepings of leaf at G&H is not regulated. (-;

Me and wibblefishofdoom had this debate on pipe smokers forum about this tobacco and we both bought a sample packs worth and i have just had my first smoke of this mixture today .the first part of wibbles review i agree with has a tutti frutti bubble gum scent to it which is strangely appealing Packing and lighting are very easy and the sweetness carrys over to the smoke but not sickeningly so I did get flavours of lakeland scents not to dissimilar to condor and there is a deffinite taste of latakia And a nuttiness of burley I will admit i was a bit apprehensive in trying this but im glad i did there is an element of fun and surprise in this as you dont know what flavours are going to pop up next Also its very easy on the tongue with very little bite Nicotine strength i found it just right not too little that i feel i need more but not too much that it makes me feel sick Over all i am extremely happy with this mix i would highly recommend it to fans of aromatics or those looking for something completely different and unique and something which will never quite stay the same

If ever there was a blend with a name that had no chance whatsoever of attracting younger smokers here it is!

Because P.M. can vary from pouch to pouch, I guess every review is fairly relative only to the pouch in question. Here's mine:

Apart from a few pieces it's mostly ribbons in the pouch, of a decent moisture amount, and has an aroma that's indicative of a floral topping; this comes across in the smoke, and is a quite overbearing. It masks a lot of the tobacco flavours, and has a chemical causticity. It causes it to bite too.

The nicotine's just below medium, and the room-note's ok.

Pensioners mix? Wouldn't by it again.

I have been looking for a decent pipe tobacco since returning to smoking my pipes. I stopped smoking them for several years but I have come back to them and I enjoy a gentle puff in my "Man Cave". I think that I have tried just about all of the high street supermarket offerings. The range is very limited indeed and nobody had a clue about them if I dared to ask any questions.

So I decided to look online and after testing several samples I have found a tobacco that I like very much indeed: Pensioner's Mixture.

There are mixed reviews but I can only judge by my own tastes and Pensioners Mixture does it for me. Some people talk about the scent of the tobacco on opening the pouch. Well, I don't ponce around sniffing tobacco. I buy it to smoke it. If it is a good smoke. Great. If it isn't, don't buy it again. Simple really. So for me at least, Pensioners Mixture is a very good smoke.

Well, being perilously close to the age of a pensioner, I thought I ought to try this! Opening the 25 gramme pack the frankly awful bubblegum scent made me wince and chuck the thing onto the side of the kitchen worktop. I thought, I cannot smoke that disgusting stuff...still it was only a few quid Then a week or so later I picked it up again while cleaning the worktop....and suprise, suprise the yucky smell had vanished completely and a fairly decent tobacco scent was left, so I took a closer look at the contents, filled up a pipe and had a smoke. Not half bad actually! Probably not cheap enough to warrant buying this too often, but not bad in the flavour or strength department. And here's a suprise, it doesn't actually smoke as if it's stuff swept up off the floor either; it smokes rather like a composite of G & H blends...which of course it is. So...message to G & H first. For goodness sake stop using that disgusting bubblegum scent! Message to fellow pipesmokers....give it a try but leave it a week or so to let the smell vanish first.

I've been hesitating for a while about whether or not to buy this one due to it's nature and finally took the plunge after a discussion on Pipe Smokers Forum so here goes.

The packet aroma for this one is, well, startling is the only word I can think of. It's a kind of sweet fruity smell, almost reminds me of the raspberry or strawberry bubblegum I used to buy when I was a kid. The tobacco inside is very finely rubbed, almost reminding me of those last few scragends at the bottom of a packet, it does make me wonder if this stuff is more floor sweepings rather than the cut offs from plugs and flakes. Nevertheless I ventured forth and packed and lit a pipe - very easy here. Strangely, the fruitiness carries over into the smoke and, while it does fade over full course of the bowl, it still pops up from time to time. As it fades, a nutty virginia, not too unlike St. Bruno Flake, appears as does a good dose of Black Cavendish - strangely nice considering I can't stand the stuff pure - and I can't help wondering if there's some burley in there too given the propensity for holding the flavouring and a little dash of tonguebite. This is quite a strong one though with a thorough dose of Vitamin N.

On the whole then, a very pleasant smoke. As to be expected of this one, the smoke will most likely change from packet to packet, probably why it's so heavily flavoured, yet I'll be more than happy to try this one again and again.

This is a lovely mild, cool blend which burns well straight out of the packet. Yes, I suspect the quality is variable depending on what's left over on the day. This is sort of a cross-over hybrid between an aromatic and a straight mixture. There is casing, I don't find it too cloying or heavy, and really can't determine what the flavour is. It smells very sweet in the pack. The floral hit on first light soon disappears into the background, leaving a rich cool smoke. This could easily become an all-day smoke. POSTSCRIPT as of September 2020. I suspect I rated this baccy a tad high given its variability, but it is still a perfectly acceptable smoke for when you're engaged in daily tasks.

It left a horrible coating in my mouth. I threw the rest of it away. Wife abhors the room note.