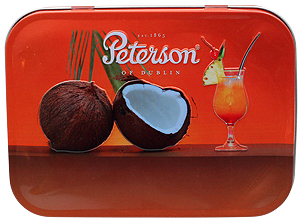 Mainly golden yellow, sun fluted Virginia tobaccos together with burley tobacco and a trace of black cavendish with coconut, vanilla and lime.

I have tried several limited editions from Peterson and of course some are wonderful and other ones disappointing.

That is just now I bought last year's blend. Opening the tin, the cocunut flavor is predominant. It reminded me of some chocolate bars with cocunut flavor I used to have decades ago!!!

When smoking it the cocunut remains predominant and I must say I did not notice vanilla or lime as advertised on the tin.

Just a nice smoke, only for aromatic enthusiasts!

i always find it hard to describe a tobbacco in one word, but this time this can be done. to me, this one is just plain and simple "joyful":)

i find this one to be a light smoke, that burns easy and smooth till the end of the bowl. no bite, no gurgling, and other similar pleasures.

coconut is very well articulated with some tropical fruit aromas and tastes in the background. no vanilla or citrus detected. a bit of cotton candy taste or similar sweetness, yet it is way back and somehow in the shadow of the coconut. no nicotine rush, just a nice and light smoke.

Purchased From: Rotterdam, the Netherlands, €25.45

After enjoying the 2011 Summertime Blend I decided to give the 2012 one a go.

Once again it's a wonderful leaf combination of Virginias, Burleys, and Black Cavendish that is very attractive and smokes well. Definitely a quality leaf.

It isn't overly moist and packs well. The char light and true light are taken nicely. It burns evenly and to a nice beautiful white ash at the bottom of the bowl.

As for flavor though, that's a whole different story. In the beginning it comes out with this horrible lime flavor that is just awful. Once you get midway through the bowl though that fades and in comes the coconut, vanilla, and a bit of liquor noticeable. The improvement in flavor is tremendous. I for one however did not enjoy the fact that I had to suffer through the first half of the bowl to get to the good flavors.

Overall it's an okay blend, but definitely not Peterson's best Summertime offering. I'm hoping the 2013 version is better.

I acquired this with much anticipation given the high ratings this has received and my previous foray into Peterson's tobacco was reasonably encouraging. I did have a little trepidation over the size of the tin but an extra couple of shifts at work put a little extra in my pocket so I thought I would indulge myself.

I was quite impressed upon receiving the tin, it's size and shape just had a rightness about them and the design threatened to whisk me off to some Caribbean or Mediterranean paradise. The plastic sheath enfolding the tobacco inside was, too, very prettily, if delicately, folded and with such neatness too. It seemed a violation to unravel it to get at the so nicely packed merchandise within. Nonetheless, I ventured carefully to unwrap the naughty leaf within and gather it into my pipe as the wafts of coconut and vanilla tempted my nostrils into inhaling deeper. My first pipe, easily packed and lit, was pleasure itself, the flavour was as intense as the tin aroma with the addition of hints of lime popping every so often. Also, hints of caramel joined with the vanilla to add an almost toffee taste to it. Very nice so far. Sadly though, this love affair with my senses faded, not quickly, but soon enough. After about ten smokes, the flavours began to fade a little allowing hints of the decent enough tobacco crept in underneath with just a hint of tonguebite along for the ride.

I am now about three quarters of the way through the 100g tin and the smoke has faded into a melange of mediocrity. It's certainly enjoyable enough to finish, I am just a little saddened that the flavouring faded so quickly, though am certainly not tempted to dispose of the remainder to the confines my scragends jar. The tobacco as it stands now, is probably worth two and a half stars, as it was with that first pipe, definitely worth four. I think a three is probably about right for the whole tin, even if I do find myself slightly disappointed.

Petersons Summertime 2012 is amazing. I noted a strong vanilla taste which in fact was stronger when smoked then the tin note would have you believe! It was a very consistent smoke throughout the bowl and packed a huge amount of flavour. I did dry it a little, as i do with most aro's which made a perfect afternoon smoke packed full of flavour! No tongue bite and a fairly dry bowl (as far as aromatic's go!)

Right a month has passed and I love this blend even more, it's such a shame Petersons will stop making it.

I am also convinced this blend also has a casing of caramel added to it too?!?!

I know, one bowl does not a review make, but in this case I'm making an exception. I've been trying to limit myself to bulk tobaccos I have acquired and leaving my tinned leaf to cellar. In this case I was concerned that the Peterson Summertime 2012 tin was not sealed. The plastic bag in the tin was neatly folded with a tape seal but the tobacco was in contact with some air. I decided to go ahead and jar the contents but in the process slipped a bowlful into a Missouri Meerschaum cob favorite of mine. I believe this to be the finest aromatic I have smoked. Realizing that I would likely want more of this blend I checked P&C and they were sold out with no indication they were waiting for more. :(

This is the finest aromatic I have smoked to date. The flavors are fully present (vanilla, fruit and a hint of lime). The smoke is cool and the leaf burns well. I highly recommend this blend.

A great aromatic the tobacco has a very nice smell the coconut comes through very well when smoked, the lime makes it rather refreshing the room note is very nice too a great smoke on a nice summers day if we ever get one good old UK weather