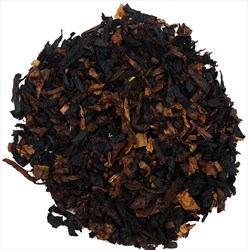 A complex English blend is in tribute to old professors everywhere, for they made us aware of our hidden talents and inspired many of us to achieve success.

I picked up a 4oz sample of Old Professor from P&C a short while ago, and it has been on the mantle for bout a week in a closed zip-bag, mostly forgotten, as I managed to slip it behind a cigar box and didn't stow it properly in a Mason jar, as is my habit with all bulk tobaccos and open tins.

I discovered it and decided to give it a whirl in one of my long-stem clays, and was instantly shocked at the texture: wet and sticky. I am quite sure this blend is laced with humidificant, and what I originally thought to be Latakia seems to be black cavendish.

Now, I smoked BCA years ago, once in a while, so while I am not an aromatic smoker, I know well what to expect of an 'American English' or 'Soft English' blend. Surprisingly, this reminds me of one of Lane's old blends--the name nd number now escape me, and somebody deleted all the Lane English blends and blending tobaccos from the database here--that was an English with Syrian leaf and a splash of black cavendish, except that the Lane blend had a stronger body.

Old Professor is very light and delicate: Indeed, it is so mild, with perplexing, sweet background notes of an unidentifiable flavour, touched by what much resembles BCA in a mixture of VA and a bit of burley. I am not even certain that Latakia is in the blend at all, and 'Mild' is its middle name, to be sure.

I would probably be afraid to smoke this much in a briar in which I tended to smoke English mixtures, however it may be safe to smoke in one on rare occasions. If you are an English smoker, and like Latakia, this will not be for you. If you are diverse and want something for a winter night, you may consider having a tiny bit on hand, and an aromatic smoker may find something in this blend to satisfy them.

I would not find it in my regular rotation, for a few reasons, but I won't kick it out of bed either. Being so wet, I find it bitey, and I find myself resting my clay every few minutes to avoid that; I also sense a waxy feeling on my tongue an on my palate that is likely from the casing or additives.

The flavour, on the other hand, is well-balanced, and despite the style not being much to my liking in general, I can't fault the composition. It would likely do better if it was drier, but, although I left the bag open for a day ere I lit the leaf, it was still so gooey that I could clump it into any shape I would desire, hence by belief that it has been laced with humidifying agents of some kind.

Of course, slow-smoking it in my clay does bring me bak in time a bit, and the gentle complexion is probably reminiscent of professors in the states, but when I think of what an Old professor smoked, this doesn't quite spring to mind: I think of musty Englishes, VA plug and Escudo.

I could enjoy this in small doses, but not every day. For an English smoker, I call this a misleading product, giving it two stars. If it was clearly advertised as an English-Aromatic I would give it 3, however until I dry it and give it a run in a briar, I think I will say two-and-a-half on average, as it is more of a transitional type of blend that could have done with a bit more Latakia to give it dimension.

Beginners may find it a good leaf, though, and anyone wanting to make the change from aromatics to natural tobaccos may find it a good stepping stone. I will go over it again, once it is in a better state, but any tobacco that I need to forcefully dry will never earn four stars.

This is a decent smoke. Smoky, woody Latakia. The Orientals are woody and a little leathery. Almost too woody, but not quite. Can't taste much of the Virginias. There is a nice sweetness, but I think it's mostly topping. Nothing to write home about, but it'll do in a pinch.

Like the Lane blend I reviewed the other day, this is the first time I've smoked anything from this company. So here's my thoughts:

Although it's badged as being a Coarse Cut, the blend contains a myriad of sizes: a few tiny dots, all the way up to some bigger twiggy bits. The smell is exactly as would be expected from this type of blend: leathery and woody. As expected for a tobacco supplied in bulk form the moisture's spot-on.

I like the way the tobacco's work together, somewhat different to the usual English style. The first thing that differs for me is the way the Latakia comes over. It's not one of those really mild kinds, and nor does it take over; instead it 'dances' on top of the smokes taste: the formidable flavour's present, but it's more of a finishing touch. So, we have a kind of 'unique' style of Latakia, and then there's the Oriental/Turkish, this gives a large proportion of flavour to the smoke; the Latakia's on top, but the O/T, without a doubt, forms the base of the smoke. Regarding the Virginia, to tell the truth I find it very very light. With tobacco flavours as inimitable as the others it seems a little bit pointless sticking that in there!

I'd put the nicotine as being medium, and the room-note's fairly pleasant.

This is a good smoke, the only reason I give it three stars and not four is I prefer a little more from my Latakia's. Still, it easily gets a recommendation!

526 Old Professor is sold by a local B&M as simply Professor. It is to my mind more Balkan than English, but is a decent smoke. The Latakia is front and center though the Orientals make themselves known, so the pouch note is typical Lat sourness, like old athletic socks. Don't get much of the Virginia. It's a pretty good smoke, though. At the right price, it is worth a toot, but at Balkan Sasieni prices, get the BS instead.

I'm giving it three stars, although it is more like a 2.5-star blend, but feel that another 2-star review will unfairly pull down its overall rating.

This blend was recommended by more than one of my local B+M stores when asking for a mild aromatic. I'm convinced those recommending it were not actually pipe smokers because i find this to be more of a cross between an aromatic and a natural smoke and disagree that it's a mild aromatic. Though it is mild, and it has a bit of an aromatic sweetness to it.

Simply looking at the tobaccos used further convinces me this is not an aromatic. This is actually mild though considering.

Its highlight is the room note.. not that it's a great note, but it's also not offensive and had a hint of sweetness to it that can be picked up and enjoyed.

Overall I find it a great transition smoke but probably not enjoyable to most aromatic fans and probably undesirable for people who like the stronger more flavorful blends. It'll serve a great purpose for a very specific need, otherwise it's best to move on and find something that falls more to either side of the scale.

Actually, this is a good blend for aromatic smokers who wish to venture into the realm of English blends...The Latakia and Orientals interact in such a way that neither is dominant...They are complementary and the Virginia adds a sweetness which would be familiar and comfortable to an aromatic smoker...As with most Virginias this will bite if you hurry it...Relax...Take your time...Pipe smoking is not about running a race...No prize for finishing first...Now about the moisture factor...I find that most Altadis blends are too moist right off the bat...needs a long drying time...To cut drying time, I would suggest purchasing a small crock pot with a warm setting...Please, do not use your wife's...otherwise dire consequences will ensue...Set crock pot to warm and dump tobacco in and cover...Check in about an hour...This would be for 2-4oz of tobacco....Adjust for less or greater amounts...Otherwise if you air dry it's going to take all day.

Through the smoky and woody Latakia, the Orientals are absolutely amazing in this blend. Floral and bright, they are the star of this mixture! surprised as the complexity of this blend. Just enough sweet and saltiness to really make this a winner.

The ease of packing and lighting make this blend that much better. Burns down to a clean, deep gray ash. No hints at biting, no harsh spots.

I've said this several times over the last few Sutliff reviews. I started with a few goopy, sickly sweet Sutliff aromatics years ago and it ruined the name for me. I've been missing out of some terrific quality blends!

I'm always trying new blends and this one's a good one. It's a very tasty blend. Latakia is very much forward in this blend. Which I happen to enjoy. I'm smoking it right of the bag and it's cool smoking with great flavor.i would definitely recommend this blend it's got a really good bang for the buck.

Another stop in my quest for McClelland replacement tobaccos. This one will stay in my rotation. After drying out 2 ounces, upon lighting, I get pleasant, slightly sweet Virginia at the top, then settling into a blend of smoky Latakia and slightly lemony orientals. The balance is fine and this taste is sustained. I've had several tobaccos within the past year that smoke fine and pleasurably but in the end leave a relatively thick, foul mouth coating - Gawith's Skiff comes quickly to mind. None of this with Old Prof. Despite the moisture in the pouch, after a little time airing out, it smokes dry and without bite, alll the way down. Average number of relights. As others have noted, sip, don't pull long and hard. Bonus points: the price is a bargain and thus so is Old Prof, an agreeably complex smoke that I've been enjoying in the evening but will try in the a.m. Room note? Can't tell. I'm outside and I have no independent nose to consult.

This is a decent, lat-forward English. I bought this just wanting to try some different blends and I’ve liked it, and thought about getting more, but I’ve yet to finish the 4oz I originally purchased. It’s...inoffensive and middle of the road, but good, just good.

Here’s a hearty English blend that is neither sweet nor too potent of a Latakia bomb. There is Latakia, Virginia and Turkish all playing along with none standing out trying to take over. The Latakia is quite musty and smoky. This blend is first class all the way. This may just be unpressed Bengal Slices, (re-release).