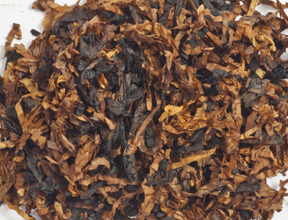 One of our most successful blends. Flue-cured tobaccos from the fields of Zimbabwe and Malawi. Blended with sweet processed Black Cavendish and mild Burley tobaccos. A cocktail of fruit and vanilla flavours gives this blend its unique taste. One of our bestsellers list.

The light and brown Virginias have some earth, wood and tangy dark fruit along with a little grass and tart citrus. They are the lead components, The burleys are mildly nutty, earthy and woody with some molasses, and a touch of cocoa in a support role. There’s some sugary black cavendish in the mix. The rich toppings are a mix of a little vanilla, and several very sweet fruits, some appear to be citrus, and I also notice the berries (black and raspberry come to mind, particularly the latter). No chemical notes to be found. They do tone down the tobaccos to a fair extent, though the toppings slightly weaken in the last quarter of the experience. The strength is a step short of the center of mild to medium, while the taste is a slot past that center. The nic-hit is mild at best. Slightly moist, it burns at a normal pace with a very consistent, very smooth and creamy sweet flavor that leaves just a little moisture in the bowl. No harsh or dull spots, and it won’t bite as it burns very cool and clean. The pleasant after taste lingers a little, as does the room note. An all day smoke.

The note from the pouch is a bit misleading, it smells strongly citrus, but the flavour's not as one dimensional. Among the ingredients citrus is an obvious inclusion (a little stronger for the first quarter), but there's also some more charismatic fruit traits, and a touch of vanilla; some of which may emanate from the black Cavendish. The tobaccos' give a laid-back flavour: a chilled out black Cav', Burley one. It burns cool, giving off a fairly thick smoke.

There isn't a great deal of nicotine in Optimal Choice, and the room-note's quite nice.

In my opinion this is a three star blend.

Put a periscope atop this one, because it is SUB-Optimal! Listing the Cavendish and Burley as processed is an understatement, the product was as soft as shredded toilet paper; however pleasing the tan/black mix of decent sized bits was visually. The initial bag aroma, while nondescript, was pleasant enough.

No. 31 packed like cotton wadding, was not sticky to the touch - dry enough to 'mostly' light on first contact, then instantly conjured up the idea of smoking hand cream on first puff. While mild in strength, there was an underlying harshness from the chemicals used, creating a very artificial smoke which was somehow 'creamy' - thus the hand lotion comparison. Through the occasional damp bowl gurgles, I was unable to pinpoint an exact flavor, certainly nothing I would consider fruit/citrus.

It was better than other 1 star blends in that I did finish the 1 oz bag, but clearly this one won't cross my lips again.

My 2oz. sample isn't going to last long. I don't find this aromatic to be overwhelming like a dessert tobacco or a flavor bomb. There is subtlety in a bowl of this beneath the artfully combined casings, and the room note is quite agreeable to those that have been nearby. All tastes vary. Mine prefers a mostly fruity note with a bare hint of cavendish, and that's what Optimal Choice seems to present, at least to this guy's sensibilities. Giving this one five stars.

I purchased 1 oz of this to try and have smoked two bowls, both from cobs, one a CW. First, from the bag it did not have a lot of smell. Kind of flat but with a tad of just basic "tobacco." It lit easy and burned all the way through with occasional tamping but no relights needed. Good amounts of "puffy" smoke. Real easy to "puff" and keep lit. The tase is supposed to be a "cocktail of fruit and vanilla." perhaps I missed that? It did leave a bit of a fruity after taste, long after I was finished smoking it but not much "vanilla." truth be told, I did not really find myself thinking of this as an "aromatic" at all. More of just a simple Burely. Kind of like cigarette tobacco. I am afraid I do not care for cigs so I do not really recomend it though, if I was out of every thing else, I would probably smoke it. There are a few things I would choose this over, Smokers Pride maybe, but that is about all I can say for it. I shall not be purchasing anymore.

A nice fruity blend for the smoker who appreciates his aromatics.