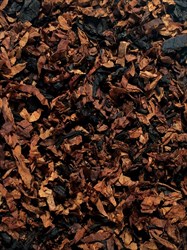 An L&P classic mixture using both English and Aromatic tobaccos for a complex flavor, sweet and spicy. A non-aromatic that smells wonderful. This blend, more than a century old, was Leavitt & Peirce's mainstay for many years. A favorite of Harvard men through the generations.

My good friend John gifted me this blend.the blend is an aromatic virginia,burley and cavendish.the smell comes from the virginia combining citruses sweet fruits,nuts from the burleys and a very sweet smell from the cavendish.needs a bit drying time packs ok and lights easy.while burning the topping taste is medium without covering the virgina and burley flavours wich combine citruses,sweet fruits and lots of nuttyness.burns medium with a bit moisture.i noticed that the burning time is quicker than other blends.the nicotine level is low.leaves some moisture at tne end of the bowl.no tongue bite for me.an all day blend for sure, i was lucky to receive it!

Age When Smoked: After 1 month

Of the few remaining old blends at L& P, Cake Box, described as non-aromatic, is in fact an aromatic albeit an old style one. Cake Box is and old time aro that is lightly sweet, but not overwhelmingly as the tobacco flavor is still able to rise to the surface. The most noticeable being the Burley although there appears to be some Virginia in CB as well. It requires some dry time prior to smoking. It never turns bitter, but it will bite if pushed. Cake Box is very straightforward and makes a nice all day smoke that is a step above OTC blends. I don’t think that this available on line and unlike L&P’s across the river neighbor, Peretti’s, L&P is as much kitsch as it is tobacco shop, but is still a nice place to stop when in Harvard Square. Only two stars for me, due to the bite, but may be better for those with more patience.

I was lucky enough to receive this a sample of this tabac from my good friend.

Its old, its Ivy league, its awesome...

I would characterize the aroma in the bag as sweet and nutty. The cut is somewhere between ribbon and coarse cut. It consists of, what looks like black cavendish, a brown leaf (I'm thinking a burley of some kind), and some bright leaf. It has a very OTC smell/feel to it.

It packs very well, I didn't need to dry it out at all, it takes to flame pretty easy. First half of the bowl is creamy, bread-like, and has some walnut-type flavor. Its a slightly sweet tabac, the only initial flavor I get off the cavendish is a very very subtle vanilla. There is also a grassy/hay flavor that really stands out. Near mid-bowl the vanilla amps up, a caramel flavor kinda sits in the background as well. Its much more sweeter mid to end of the smoke. At the end of the bowl though, it kinda turns flat and the flavors mute, sometimes ending with an ashy taste. The ashy taste was not a constant feature of this blend though. I smoked it in various pipes with different means of packing. I would say the ashy flavor predominantly happens when the tabac is packed lightly. However, I still noticed that the flavors of the tabac did always become much more muted and the blend turns flat before the end.

The sweetness from the cavendish is the only thing that lets the smoker know its aro. I've been stuck on Va/Per lately and this was an easy transition. I think the cavendish acts more as a smoothing agent than anything else. The vanilla/caramel flavors just act to compliment the other flavors in the blend. The grassy/nutty flavors are definitely the main profiles here. It's not acrid nor is it harsh at any point, I think the cavendish is to thank for that.

It burns down to a fine mid-grey ash, some dottle. I noticed a bite, it was not MacBite or anything, but it was here and there. This is definitely an all day blend. It smokes so easy, and the aforementioned bite is rather tame. I did find that this does burn a little hotter than I would have liked. I think this is why the flavors get muted toward the end.

The aroma is pleasant and sweet. I wouldn't say its stunning or really unique in any particular way. Kinda like a less sweet Captain Black Gold.

I can see why this blend has been around for so long, its so very easy to smoke all day. It is a very forgiving and mild blend. It has a multitude of subtle flavors that can be analyzed and dissected, but it is also a simple blend that pretty much everyone could enjoy. Its main faults are the bite and the heat, but I think that could have been my error. I found myself smoking this rather quickly, because I just really liked it. It was definitely an all day smoke for me. Its not a blend that will totally change the way you think about pipe smoking or anything like that, but it is a solid, simple and fun blend. All in all, I highly recommend.

L&P's flagship tobacco since the late 19th Century, generations of Harvard men have been smoking this. It ships all over the world, and it's no great wonder. Pack your pipe with this one, and you'll never go wrong. Legend has it that the original blend had a certain amount of cigar leaf, but that seems to have gone by the wayside. tThis is a Virginia mixed with a Black Cavendish base, and it deserves to be part of everyone's smoking repertoire.