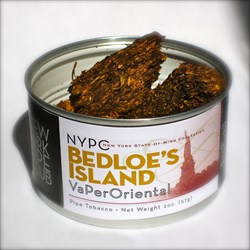 A dramatic merging of bright Virginia with a generous portion of Acadian Perique is invigorated with a measure of Macedonian oriental leaf and presented in a pressed cake. Sweet on the top, it develops into a lush, complex smoke with a savory body and layers of flavor from the oriental component. Muse upon a "New York State-of-Mind" with Bedloe's Island.

These are almost 3/16" thick flakes intensely pressed to almost ~ to a plug. From the tin, I thought it was dry and that and the stiffness made packing without rubout as I prefer difficult. Initially, the sweet VAs dominate but about half way thru the bowl the spice of the Perique and the orientals emerge and result in an enjoyable smoke.

I bought this sometime in 2012, though I can't remember exactly when. I opened the tin and was greeted by a couple of cake/plug pieces ala C&D. It had a somewhat hayish smell but not overwhelming. I broke a bowl up and it smoked cleanly to the bottom of the bowl but it didn't particularly grab me, it also didn't repulse me. I tossed it aside and did not revisit it for many months at which time I found a far less hayish quality and a more inviting aroma combined with subtle richer flavor with all the components working together much better. The virginias and orientals are the dominant taste to me with the perique playing a supporting role, in this regard it reminds me of McC Pebblecut, not that the taste is exactly the same but the idea is. This is one tobacco where I agree (here at the end of the tin) with it's basic description of "sweet on top developing into the savory."

NYPC blends don't seem to get reviewed or talked about much and that's unfortunate. My biggest problem with this blend is that it took a long time to develop into the smoke it should have always been. It's worth trying but be prepared to wait.

7-7-14: Here is an update on this blend, FWIW. A few weeks ago I decided to add anohter tin to my cart and I'm quite happy I did. First of all it is clear from the tin that C&D are no longer producing this, it is now Sutliff but don't worry you still get 2oz. The cut however has changed, it is no longer the brownie/plugs it is thick sliced flake and tastes wonderful right out of the tin with all it's potential dimensions present. It should age wonderfully.

Bedloe's Island is an excellent example of the need to get to know a blend before making a decision on it. I must admit that at first it didn't work for me. But by the time I had finished a large sample from the Chicago Pipe Show and an additional half tin, I ended up with a terrific blend. Somewhat in the same family as Russ's Sweet and Savory, but to my taste, I enjoy BI much more. The krumble cake is easily broken up and the moisture content is “pipe ready.” The tin note is that of sweet hay, with some raisons in the background. It really develops after the first quarter of the bowl into a wonderful, balanced and sweet smoke. There may be a very small amount of manually added sweetness in the blend. My tin upon opening was about 45 days old and I assume the sample, also from a tin was about the same age. Bedloes's Island is very good right now, but I expect it will be simply outstanding with a couple of years of age on it. I will definitely be adding some tins to the cellar. So for now, it's a three star, recommended blend, but there's no doubt in my mind that this will be a highly recommended blend when aged!

Gorgeous light to dark crumble cake with a rich hay and wheat bread tin aroma. The cake was easy to uncrumble and load with just a small amount of effort between thumb and forefinger.

Even though I'm no fan of Sutliff, I was happy to hear that Russ had moved his production to them from C&D. Sutliff base tobaccos are much better to my taste. On the other hand, this blend shows what those tobaccos can become in the hands of an expert blender, as Russ (and Ernie Quint of Watch City) really know how to make them shine. This one reminded me of Russ' "Sweet and Savory" in that even though lemon Virginia was used, this was more savory than sweet. Once properly dried out, this blend developed nicely, getting sweeter as the bowl progressed. The sweetness did not, however, seem Virginia derived but more from some sort of topping. The perique was noticeable but not overly spicy or peppery - it merged very nicely with the orientals into a sweet/sour/spice partnership. There was a kind of tartness to the blend that came and went and that I absolutely loved. My only issue with this one was the first quarter-bowl or so, where it refused to come together. It was clearly tobacco, but no focus. It took that long for the blend to become cohesive and show off its depth (depth being something that Russ' blends always seem to have in spades!). Enjoy complexity? Give this one a try. Fruits light and dark(ish), various breads, even a kind of sweet corn flavor at times, along with just about everything from grandma's spice rack. And yet, I found myself preferring Sweet and Savory, even though I can't quite say why. But I do believe I'll pick up a few more tins of this, as S&S kind of eluded me at first as well, only later becoming a favorite. Try this if you like complexity and VaPers. Not to be missed. I suspect this one will grow on me.

My tin was a tad on the dry side, but not in any way dried out. The kake was not always the easiest to deal with, but since I don't fully rub out flakes, kakes, or plugs, that didn't bother me, but it may others.

I rarely detected the Orientals in this, but they reenforced the VA and the Perique. There was certainly a generous portion of Perique in this. The overall effect was a somewhat spicy, as opposed to relaxing, smoke. Certainly a blend VaPer fans out to try. Since I know there are many tobaccos out there I would rate a 4, the question arises would I rebuy this particular tobacco, assuming my tastes don't change much more. In this case, the answer is probably not.

An outstanding blend. On tin opening (about two months of age on this one) there was a great Va/Per notes also with mouth watering Orientals coming through..the cut was three to four crumble cake slices. Had some moisture (not much) while breaking up a few bowl. The wonderful aroma got much stronger, left out to dry for 6-12 hours...loaded up a med-sized bowl using Frank-method and off I went to an hour of smoking bliss...not to sweet or tart but a great balanced VaPer, about mid-bowl the Orientals showed up and continued to be present for remainder of the bowl...burned even and to a nice grey ash, min-relights/Dottle at end of the bowl...should be Fantastic with a few years of age on her....worth stocking up on this one...