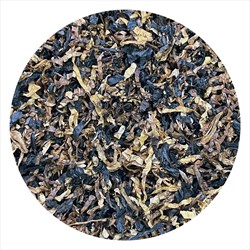 Tobaccos Watch City Cigar - None of Your Business

A blend of black and golden cavendish and bright Virginia tobaccos tobaccos flavored with orchard fruit extracts and lightly spiced with Latakia and perique for a unique taste experience.

What's the exact formulation? It's none of your business!

I am miffed as to why Watch City Cigar is not reviewed more often on this web site! They produce some outstanding krumble cake VaPers (How many US pipe shops still do that?) and as I result, I always look forward to new offerings from Ernie at Watch City. “None of Your Business” is their new aromatic English blend. After some needed dry time, NOYB starts off with the taste of berries/fruit. NOYB doesn't have that chemical taste often found in aromatics. As each bowl progresses, the sweetness and berry/fruit flavor move toward the background, but never completely move away. At mid bowl, the Latakia and Perique become more pronounced and NOYB moves into more of an English realm albeit still as an aromatic and doesn't become bitter or goopy. I'm not a big fan of the blend's name, but that's about the only negative I can find with this “top shelf” English aromatic. It makes a great “dessert” tobacco or a great blend for aromatic smokers that wish to try a little Latakia. Highly Recommended!

Light brown to black ribbons with a bag aroma of just what it says - orchard fruit (I smell apricot, peach, cherry and maybe some blackberry as well as who knows what) with a backdrop of latakia and perique. Too wet to smoke without some drying time. My first thought was that this blend should not work on any level.

But it does! Yes, it has the orchard fruit/berry taste up front and center (at least initially) but there is a dark spicy woodsmoke flavor to the rear that gets more noticeable as the bowl progresses. Also a slight tingle in the throat that could only be caused by perique. Still, this is a lot too fruity for my tastes. But wait! The further I went down the bowl, the more this morphed from an aromatic with a sidecar of pizzaz to a typical latakia-forward/aromatic crossover with the emphasis on the tobacco flavors. Experimenting with longer drying time caused the sauce to recede further and earlier but it never goes away. And that's the point, methinks. I liked what the perique brought to the table as well, turning this fruity blend into a more spicy one. This is a weird one that probably only the mind of Ernie Quint would ever envision, let alone actually blend. As I said, it shouldn't work, but it does. I had no issues finishing the 2 oz sample but don't see myself going down this path again. Again, no matter what I do, it's still too fruity for me, but if you fancy that flavor but want more tobacco taste in your bowl, this is definitely one to try. Let your hair down and be radical!

Ernie really has fun with his tobacco blending and sure liked to use the sauce (the kind that goes in tobacco, not his mouth... at least, i don't think), anyway, who can resist a blend named None of Your Business? Not sure if it is still available but was one of the four or five blends I purchased from Watch City a couple of years ago. Aromatic? You bet! English? You bet? Can you taste the Perique? You bet. is the combination delicious? Well... not really but it wasn't bad. I mainly stayed interested due to the flavoring, which added a nice touch.

I usually smoke Balkans and English blends. I wanted an aromatic that wasn't too sweet and had some the flavors I like, this one does it. Fascinating combination with a mellow sweetness that reminds me of apricot. This is an aromatic that I will go to again.

Steelcowboy is right about one thing. Ernie is one of the most under rated blenders out there. And Mr Ernie, I don't know how you pulled this one off but you did. Orchard fruit/berry should not be mixed with latakia. Until now. Whatever you did with this one keep it up. Bizarre and at the same time wonderful flavor. A bit eccentric for an everyday smoke, but this was well done. Four stars for pulling off something that shouldn't make any sense.