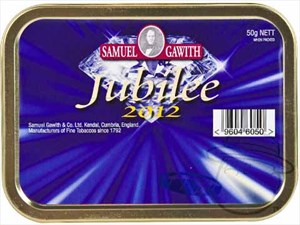 Samuel Gawith have packed 50 grams of a celebratory blend of Virginias and black cavendish with the fizz of champagne.

The champagne flavor is very light and unexciting. There's a hint here and there of vanilla, and the Virginia is very mildly citrusy, a bit hay-like, and doesn't do much more than act as a base for the blend. The nic-hit is mild. Won't bite or get harsh. Burns cool at a moderate pace with a lackluster, consistent flavor. Leaves a little dampness in the bowl, and needs an average number of relights. The after taste is dull. An all day smoke.

I wonder how many people are out there, sitting with their tins of this stuff, waiting for the bank holiday weekend in June. Plus there's the ones who will keep a full tin hoping it'll be worth something in a few years. Well, I don't want to ruin the surprise for anyone but, in summary, don't bother. Here's why.

I ordered this as, being an Englishman, I only thought it right to buy a tin by one of our best providers of the naughty leaf that celebrates the reign of one of our greatest monarchs. Nobly, my bank account did oblige and this, along with tins of two other tobaccos. I had actually planned to smoke this one last, but my anticipation, excitement and appreciated of SG's finest got the better and I caved in. My god, I wished I hadn't.

Upon opening said tin, I was a little disappointed at the aroma, a barely tangible scent of flat champagne was all I could discern. Packing and lighting, well, yawn, very easy as always. One of the first noticeable things about the smoke was the tonguebite, even with filters in pipe and stem. With said filters, the tonguebite isn't too bad and disappears quickly leaving that flat champagne flavour with hints of toffee and something else, might be the virginia coming through maybe. Still though, quite a pleasant, if not challenging smoke. Without any filters though, the tonguebite, while not lasting much longer, quickly kills the tastebuds so there's no possibility to get to grips with what it's really like. Worse than all this though, all flavour disappears three quarters of the way into the tin, leaving nought but fuel to keep your pipe warm.

Now, I know this all sounds like I should be giving it one star, but I did have some nice smokes when the tobacco was at it's freshest, so I think two stars is fair enough. Only the truly rank gets one star in my book. However, I am very disappointed with Samuel Gawith's for this stuff. Everything of theirs I have have tried so far has been of a high standard, in fact every SG pipe tobacco I have sampled before this I have rated four stars either first time round or on appeal after being good enough to require a second tin. This stuff is a letdown. That tonguebite for a start, I can't help thinking they put it in on purpose as if to try and give the fizzing sensation of champagne along with the taste. And the flavour, though okay doesn't really work and the tobacco struggles to raise it's head, as if it's been cured lazily. I can always tell a tobacco is not up to much when, at some point, I begin to get this nagging thought about throwing the stuff out. Needless to say, that happened here.

It is tragic that the one company I would trust to come up with a celebratory pipe smoke would be Samuel Gawiths. The real tragedy though, is those who bought this to either enjoy on the day or as investment. Bought some have you? Kept the receipt?

I love Sam Gawith tobaccos, in my opinion they make some of the best. This, unfortunately, isn't one of their better offerings.

The ribbons include a slightly higher proportion of Virginia than black Cavendish. I'm not too fond of the aroma from the tin, it's quite sour.

I wouldn't say this is highly aromatic, it's only quite mildly flavoured. But, even though the added flavouring's mild, there's just enough of it to give the smoke a sour rankness. It also bites me like an animal..... one with big teeth! To be fair, the tobaccos taste nice enough, it would be a pleasant smoke if it weren't for the casing.

The nicotine's mild, and I don't like the room-note.

It's quite a rare occurrence for me: a Sam G' blend I find abhorrent!

Yes, I also got carried away with the diamond jubilee celebrations and thought, what the hell, I'd rather spend a tenner on this than on cheap Chinese bunting.

As the previous reviewer observes, this one's a biter. I have a very low tolerance threshold for cased tobaccos, all of which bite me to a greater or lesser extent, but this is one of the worst blends I've smoked recently. I persisted through a couple of bowls, but then stuck it away, almost certainly never to be smoked again.

As far as the flavour is concerned, it could charitably be described as odd. There's no champagne note that my palate can detect, rather just a bitter note of citrus peel.

Hard to recommend, even to the most enthusiastic of monarchists.

This blend is very unusual in flavor presentation as Gawith managed to include Virginias and Black Cavendish infused with fine champagne. The smoke is cool and certainly has the rich Lakeland Virginia flavor. The Black Cavendish provided body and both offered the sparkle of Champagne. Most would consider this a medium bodied smoke.

Good tin aroma - oak barrels, dry white wine, a masculine musk. The tobacco's a very soft, quite short ribbon with some rubbed out broken flake. I found it too sour on the first smoke, three weeks before the jubilee. On the jubilee weekend it was slightly more tolerable but still not great. Three weeks after the jubilee its now quite smokable but wholly unremarkable. Its gonna be cellared for when I'm either bored enough to want a tobacco with very mild qualities or it's the day of ERII's state funeral, whichever comes first. My money's on the latter.

I purchased this when it was released but didn't smoke any at the time. From memory there were three different tin designs available with the same blend inside, I chose the 'punk' looking union flag design (think Sex Pistols c.1977 Jubilee, minus a safety pin!).

Having read the poor reviews of earlier contributors I was slightly worried. I needn't have been. On first opening the 8-year-old tin the contents were indeed still very wet in traditional Samuel Gawith style. There was also what I'd describe 'funky' smell from the topping that may have been champagne at the time but now was more like the smell from 2 or 3-day old cut grass that has just started to 'compost'.

However, the poor tin smell went very quickly (and now after a couple of weeks is barely there at all). What is left is a wonderful English mixture that smokes beautifully. The cut is a rough ribbon of good quality (no 'twigs', which had become common in the more expensive Dunhill blends in recent times in my experience).

The taste has real depth and substance, and I have found no bite at all even now the blend is drying out in the tin, and it is a lovely all day smoke (perhaps because of the lack of discernable topping that have put others off in the past).

The room note is also fantastic, and one of the few that I really enjoy walking into whenever I've had a bowl and left to do something then returned a little later.

The bottom line is that if anyone else has a tin that they have laid down to mature I would suggest that now is a very good time to finally open and enjoy it!

Purchased From: My Smoking Shop UK