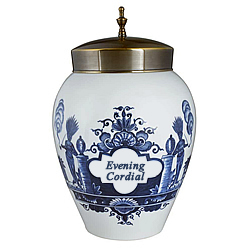 Black Cavendish is double flavored with enticing chocolate and a hint of cherry essence. This produces a smooth, mild, and highly flavorful smoke.

I was given a four bowl sample of Evening Cordial as part of a recent 4 Noggins order so is review is based on that small sample. I like aromatic tobacco as a change of pace, but it is rare for me to like a straight Black Cavendish blend. Evening Cordial is an exception. Like most aromatics, it arrived too wet to smoke and the pouch aroma is mainly chocolate and I couldn't detect a pouch scent of cherry. Once properly dried, EC provides a sweet chocolate smoke and the cherry makes itself known in a good way. It didn't goop up the bowl, but due to it being a straight Black Cavendish with a fair amount of casing, it should be smoked slowly for the best result. It stays sweet and tasty throughout the bowl and has no chemical taste or bitterness. There isn't much tobacco flavor due to the amount of casing so I would suggest it as a dessert tobacco. Rich has really done a nice job with Evening Cordial and I would buy it again. Three and a half stars.

The chocolate is the star flavor of this blend, though the cherry makes itself known as you smoke it. The tobaccos have little say in the proceedings. The nic-hit is barely noticeable. Won't bite or get harsh. It may need a little dry time, and burns at a reasonable pace if given that. A cool, clean and smooth smoke with a very consistent flavor, though not as rich as it could be. Requires some relights and leaves moisture in the bowl.

A coarse, black, mixture, which smells potently aromatic and has a good level of hydration.

Evening Cordial generates big plumes of smoke. So open a window! I get far more chocolate than cherry. The cherry's notable, but only has a gentle character, giving a lot more sweetness than cherry-acidity. I find the burn medium in temperature, becoming warmer than most black Cavendish's if it's puffed voraciously. The burn's medium in speed, unless, like with the temperature, it's puffed to hard; it can go quite fast that way.

Evening Cordial? A good blend, but a few too many hiccups for more than two stars:

A plain black cavendish with a subtle chocolate / cocoa flavour. I tried really hard to find any cherry flavour; in that sense I was a little disappointed. I can always reach for my favourite "Catamount" by Rich for a fuller cherry aroma. Initially this was quite wet and clearly benefited from ageing. After 6 months it does not goop up the pipe and it burns evenly if a tad hot. The dottle is flaky and crumbly. The chocolate flavour disappears about halfway through the bowl and the honest (if a bit plain) sweetish BCA remains till the event. Still not much cherry. Might benefit from adding a small bit of another tobacco to it (possibly vanilla-based light cavendish).

Age When Smoked: aged in a jar (6 months)

In the pouch, in the tobacco itself, is wonderful... But when burning in the bowl... this is clearly less good. The Chocolate and Cherry flavours ans tastes are very week. almost tasteless. Only the pure,natural tobacco flavour and taste is noted. Good Qualitu Tobacco however. If you is a Pipe Smoker, that want very little aromatized tobaccos, that rassembles non aromatic ones. This is the Blend for you.

Got this as a free sample from an online order. Very moist with a distinct chocolate aroma. Hard to get lit, but once I got it going it burned very nice. I was expecting a cloying sweetness and tongue bite based on the aroma, but it was far from that. It starts very mild, but finishes quite well. Not much cherry flaovr detected, and slight chocolate flavor over all.

I was pleasantly surprised and just might buy this one when I need more tobacco. I would not think of this as an evening smoke but maybe an after breakfast smoke. I could see it in the evening with a nice Belgian Quad. The smoke would not overpower the malty goodness of the beer.

As is common, too wet to smoke out of the (sample) packet I got. A wonderful smell out of the packet, and the other half quite likes the smell (always a plus)! The flavouring doesn't jump out at me (but I'm not very good at detecting flavours). The basic flavour is that of cavendish with hints of chocolate and cherry - very nice. The first bowl burned all the way to the bottom with only a couple of relights. It did tend to burn hot (in a meerschaum) but that's probably me - when I let it cool and dry for 10 minutes in the pipe, it was much better. Well worth trying if you like aromatics.

This is one of the best of the all dark cavandish aromatic tobaccos that I have tried. It does seem to have a vanilla and Carmel taste. It burns well and leaves a well formed ash. The flavor does seem to get less noticeable toward the bottom of the bowl. The sample I had was a year or so old as I forgot I had it. I don't think that aromatics age well or at least as well as other non aromatics do. A fresher sample might yield a better result. It is well worth trying at any rate.

Age When Smoked: About 10 months

Similar Blends: Edwards buccaneer which was they best selling tobacco until they ceased production..