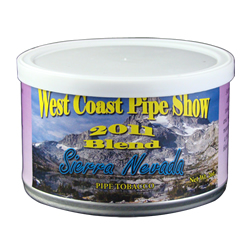 Difficult to define, this blend contains seven different tobaccos with a flavor that is both unique and satisfying. Sierra Nevada is perfect for a hike in the mountains or while relaxing in front of a fire. This Virginia, Oriental, Perique blend is complex and intriguing with a hint of spice, enjoy!

Notes: The Sierra Nevada blend was created by Russ Ouellette for the West Coast Pipe Show in November 2011.

Less of a fish flake cut than a lot of Russ' blends, this one also came a fair bit more moist in the tin than I'm used to from him. It wasn't wet, just more moist and in fact, it performed very well with no additional drying, although it did seem to improve over time. Chestnut brown with some black, and a very musty tin aroma of orientals with some perique in the background. Easy to light and to keep lit. This tin was not dated and I've only owned it for about 4 months.

Flavor-wise, this is along the same lines as Sweet & Savory, but it's different. The taste is decidedly not sweet but there appears to be a bit of casing that ebbs and flows. Overall the taste is of orientals but the base seems to be Kentucky to me rather than virginia through the first half of the bowl. The perique is not apparent in the taste during this time but tickles the nose and palate.

The second half of the bowl, things get even more interesting and complex. The perique comes out to play, just a bit here and there, and the virginias begin to assert. There's a hint of sweetness but the VA's tend to be of the tangy variety. There are a multitude of flavors present and they change in subtle ways. A lightly sweet nut with toasted oats and a hint of nutmeg. Definite toasted bread notes, with the toaster set to its highest setting, but the toast is released before it burns. I think I prefer this to Sweet & Savory, and I highly recommend this to those that enjoy that blend, and everyone who enjoys a big dose of oriental. A contemplative blend that can also work as an all-day smoke. Definitely more tins headed to my cellar!

I wanted to get the "review ball rolling" so I just popped open a new tin, didn't let it dry or breath, just stuffed it in a small bent apple and fired away.

It took the match well and burned at a nice rate. My initial reaction was ,"does this contain Yenidje?". It was a medium natural sweetness with some spice and an incense type of scent ( Yenidje or Perique ?) . It was well balanced, slightly spicy and very interesting. The Nic was better than medium.

I became obsessed trying to identify similar blends and thus I totally blocked out what the Perique or Virginias were doing, sorry. I think this might be similar to Dunhills London Blend (W/o Lat.) or McClellands Tudor Castle. I then called in the "Smell Critic (wife)", she said it smelled like toast !!! not what I expected, but that's pretty positive for her!

I've had my share of harsh reviews against some of Russ's blends, and some unjustly as I didn't give enough sampling time, but one thing I will always say is, " you never pay for water weight". This comes ready to smoke without drying and the tin is filled to the brim.

I'll modify this review as I smoke more, but I'm game to start this off with 4 stars.

Updated 4/21/12- after trying this off and on for a few months, I've decided this is a little flat to deserve 4 stars. I detect a Kentucky/Burley component. Still a nice blend, but 3 stars.

This blend has its' own unique flavor. When I first opened a tin it had a bit more spicy flavor than I liked, but not terrible though. Moist but not wet and lit well. As it aged the spicy flavor dropped off enough that I enjoyed it in the background. The first half of a bowl the Orientals were foremost but still a Virginia flavor running slightly behind it. The second half of a bowl the Orientals dropped to the background with the Perique and Virginias to the forefront. But the Perique not so strong as to be nose burning or unpleasant . This is a very pleasant blend to smoke that gets even better with age. The strength is medium plus a little, just a relaxing kind, which comes in slowly on the second half of a bowl. The room odor is mild. For me I find this a unique blend that in its' own way rates in the kind of category as Magnum Opus. After smoking a mild blend and wanting a change of pace I go to this one. One of Russ' better blends IMO. Enough so I bought 5 tins when on sale. I'm really surprised it hasn't received more reviews. Believe most will like it.