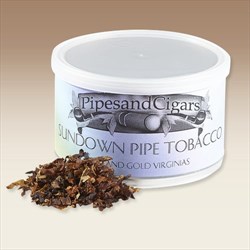 If you're a Virginia lover, don't pass this one up. All pipe smokers who love the Brightleaf know that McClelland's Virginias are among the best in the world, and they have a magic touch when blending them. For a tangy, sweet smoking experience, you won't do better.

Notes: Made by McClelland for P&C as a companion blend to Starlit Night.

The moisture was about right upon opening and is improving since putting it in a tobacco jar. OK, its probably a cookie or pasta jar, courtesy of Walmart.

On the lighter side of medium, but great tangy flavor.

I bought two tins of this. I will let the second one age for a few years. Should be interesting.

The saying "it's all in the snork" is very true for this one, as simple puffing didn't bring much flavor. When snorked, red VA's predominate the flavor which is both heady and light. Very little sweetness to this one and it leans toward McClellands Aurora, which didn't hit me all that well. This blend has a bit more spiciness to it, which elevated it slightly over Aurora. Both blends are extremely mono-dimensional. Aggressive puffing didn't produce much bite, and this blend is extremely tongue friendly and about low-to-mid level on nicotine. I'd give this 2.5 stars. It's a very decent blend but doesn't bring much new to a table already overrun with classic virginia blends. Perhaps McClellands is saving their classics for their own label. This one is nice, but unnecessary, IMHO. But it's worth a try if your tastes lean toward a lightly spicy and less sweet virginia.

I was gifted a tin of Pipes and Cigars Sundown pipe tobacco blended and tinned by McClelland by a close friend who knows that I really enjoyed straight Virginia blends. Tin date is 2011. Upon opening, one is greeted by the familiar McClelland ketchup aroma, though here it is not as pronounced as in other stoved blends. The tobacco is a ribbon cut, coming very close to a shag cut. I found the tobacco to be at about the right humidity, not needing any additional drying time. My first bowl was enjoyed in a Savenelli Estella LX, without filter. The tobacco loaded and lit well, producing voluminous smoke similar to an English blend. Initial taste was unspectacular, but not bad in any way. The tobacco burned a little hot, prompting a slower draw then I am used to, I believe this to be a factor of the cut and not the blend, coupled with my own smoking style. I had to set the pipe down and come back to it after it cooled. There was no bad taste upon relighting, and the smoke resumed where it left off. The blend smoked consistently throughout the entire bowl, neither improving nor diminishing in character.

Overall, my first impression of the blend is unremarkable inasmuch as if neither impressed nor disappointed me. It is a true straight Virginia blend and should be taken as such. If one is looking for a sweeter Virginia smoke, then this is not for them. If the smoker is looking for what a good baseline representation of what a Virginia should be, and one that lights and burns well out of the tin - then this one will fit the bill.

As I smoke more of the tin I will update the review. Right now I give it a three out of four, and recommend the blend.

The Va(s) are soft and wine-like, with no "hot", piquant (or sharp) characteristics. There is very little of McClelland's notorious ketchup taste -- just some tanginess; but my tin is dated 2012 (5yrs.) The most prominent taste is a spice flavor. Clove comes to mind. Here, I think it is too forward, and a little distracting; but it shouldn't diminish the enjoyment if you're in the mood. Best on a clear palate: more of an appetizer than after dinner smoke.