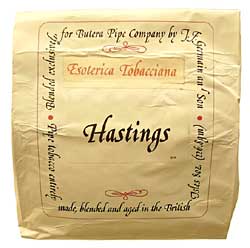 An aromatic tobacco made in the same time honored tradition as our English and Virginia blends. Five types of Virginia tobacco and an equal proportion of black Virginia cavendish with an added aromatic essence. A soft and gentle smoke of outstanding quality.

Hastings is one of those tobaccos that tastes a lot different than it smells. I took a whiff just after opening the package and was afraid I'd gotten myself into a really sweet blend. Sweet tobaccos smoke (as a general rule according to my palate), wet, have little true tobacco flavor and are limp wristed in the strength department.

Hastings was none of the above. It is a sweet smoke but actually had a baby mule kind of kick to it that I appreciated. Easy to load, light and keep lit. Although I wouldn't smoke this regularly, I will keep the pouch and finish 'er off in due time.

As for the flavoring; I can't identify it. Kind of a fermented fruit of some sort?

The various Virginias offer a bit of dark fruit, earth, some grass, bread and hay, plus a bit of citrus and a little sugar from the black Virginia cavendish. The toppings are hard to define, but I notice some apricot brandy, a mild touch of anise and plum, and perhaps a couple drops of caramel in the mix. The toppings do sublimate the tobaccos to a moderate extent, and melds well with the varietals. There are a few alcohol notes from the apricot brandy, though in this case, I didn’t find them distracting. The strength and nic-hit are in the center of mild to medium, while the taste level is a step past that mark. Won’t bite or get harsh, and has no rough edges. The tobacco is fairly moist and may need a light dry time, but being thin cut, it burns well regardless of how you handle it. The sweet flavors are consistent from start to finish. Leaves little moisture in the bowl, and requires an average number of relights. Has a sweetly pleasant, lightly lingering after taste. The room note is equally pleasant. Can be an all day smoke.

I really liked this tobacco and was really happy to receive a very large sample of it from a forum friend who did not realize it was an aromatic when he ordered it. I am wondering if he may regret giving me such a large sample after he has had a chance to delve into it.

Yes, this is an aromatic, but the topping (which I would put as fruity maybe blueberry) is applied sparingly and the high quality Virginia that Esoterica incorporates into its blend really does shine. If you are familiar with Esoterica blends, then you will be happy to see the bloom covering the Virginia in this aro just as it does in all their other blends.

There is a reason Esoterica blends (or just Germain blends in general) are so elusive, they are fantastic. This one was no exception. I will not put this at 4 stars though as I think the true aromatic fanciers will be let down by this one as the topping is so light. It may come of as diluted to their taste buds.

I think this blend will more suit the Virginia enthusiast as a change of pace smoke from the more hay sweet stuff they are used to smoking.

Very similar to Woodbridge, pretty much its sister blend. Hastings has the same sweet spice, fruit and licorice pouch note, along with a somewhat deeper aroma that carries the suggestion of rum. Like Woodbridge, the tobacco is a blend of stringy tan, brown and black shag. In other words, long, thin strands of springy ribbon-cut leaf. Comparatively, Hastings seems to have more of Germain’s hot-pressed dark Virginia leaf mixed in, but it has a milder tasting topping.

This is still a sweet smoke with a pleasant flavor and a light spicy quality to it. Like Woodbridge, the aromatic flavoring is perfectly balanced with the taste and tone of the tobacco. I found both of these blends to be quite satisfying, I can’t stay that I strongly prefer one over the other. I'd say that Woodbridge is a bit more rich overall.

At this time of year, many blenders offer up an aromatic holiday mixture. Personally, aside from seasonal non-aro's like Peretti’s fabulous Thanksgiving Day and McClelland’s Christmas Cheer, I haven’t smoked a holiday blend that was to my liking. Holiday blends, especially the aromatics, are usually one-offs & rarely are they fully realized. I was smoking this the other night and I kept getting subtle hints of holiday spices, rum and fruit cake & I thought to myself, this blend, or Woodbridge would make a perfect Holiday aromatic.

An unusual Esoterica. Yes, it is an aromatic. Stick your nose in the bag (or jar) and give it a good whiff, and you might think it's an overpowering, goopy aromatic, but not so. It behaves in the pipe more like a Lakeland, though the flavorings are a bit different. I get fruit and liquor, but I'm not sure exactly what. Underneath are some very fine Virginias. No gunk or goop; it dries out as much as you want it to before smoking (I like my tobacco dry, and use a wooden bowl), and the flavors remain, but are toned down a bit from how the blend smells when still moist. I like it, but I like some of the other Esoterica blends more. This will be more of a "change of pace" smoke. I can see why it's one of the less popular Esoterica blends, but don't dismiss it out of hand. Unusual, yes, but still a quality smoke.

I have been smoking Anniversary for the last couple of weeks, so I decided to visit my local pipe and tobacco shop to grab some Penzance.

I really don't like Aromatic tobaccos with sweet, fruity, goopy additives. I like the taste and smell of fine, natural tobacco.

So I browsed the other Esoterica tobaccos the store had in stock; to my dismay, they only had the $30 dollar sealed bags of different Esoterica blends. I had made up my mind to just grab some other English blend and be done when I saw a tobacco jar with the label "Hastings" by Esoterica. I thought "what they heck" and bought an ounce.

I also had no idea how tasty and mellow and smooth it was! This blend is really, really good quality and the fact that it does contain some flavoring in the Cavendish should only make me hate it.

It packs very well, lights easily and stays lit with the proper tamping and tending. The flavor is at first intense and sweet. I think it reminds me of caramel, but not in a candy bar caramel way. More of a faint aftertaste kind of way.

It burns very cool considering what's in it and leaves a-get this- fine white ash.

It is stronger than I had anticipated nicotine wise but not in a bad way. I hate high octane high nicotine blends and this is just about perfect in having just the right amount of kick.

Like the tin says, it is a soft and gentle smoke. I will be buying more for those times when I need a break from my Va/Balkan/Lat blends.

Yet another mild winner from Esoterica. Hastings is a virginia through and through. Burns well with only a couple relights. The tobacco flavor that comes through the casing is mild yet tasty, a pleasant, medium sort of taste common with Virginias. I find the combination good but mostly uncomplex. Moving on into the second third of the bowl, the sweetness has intensified a bit, though it is still fairly mild. Could easily be an all day smoke.

Notes: I don't smoke a whole lot of aromatic mixtures, but this one is topped rather lightly and is an enjoyable smoke. I have tried several ounces on and off as a change of pace. I enjoy it most in a small billiard.

Taste: Not as round and mellow as it smells. Bright and spicy on the palate. Redolent of caramel. Spice cake, fresh plums, figs, sugar syrup. The topping blends nicely with the tobacco flavor and is not overly intrusive.

Comparisons: Similar to Cornell & Diehl's Professor with a caramel-sweet topping. Along the lines of Paul Olsens No. 3005 or Dunhill's Early Morning Pipe, but less complex, brighter, and with a mildly sweet topping.

Bottom Line: A simple, sweet mild English blend to start the day. For those who find Dunhill's Early Morning Pipe a bit too serious and desire a less subtle, sweeter blend.

This is a nice, light, Virginia-based aromatic that is about as far from Captain Black as you can get. It's a nice, mild change of pace that Virginia lovers especially might want to try. The bag aroma is sweet but not fruity, almost musty perhaps, fairly strong smell that is not unpleasant. The tobacco itself is dark, with equal parts black, dark brown, and medium brown in a narrow, long to medium-length cut. The moisture level is fairly high, probably the highest I've seen thus far in Esoterica tobaccos but still no where near the McClelland standard. It packs easily and lights well, burning easily with an average number of relights needed. In the first third of the bowl, there is a fairly strong sweetness in the flavor, clearly present but not at all overwhelming. The tobacco flavor that comes through the casing is mild yet tasty, a pleasant, medium sort of taste common with Virginias. I find the combination good but mostly uncomplex. Moving on into the second third of the bowl, the sweetness has intensified a bit, though it is still fairly mild. I have also noticed a tendency for the smoke to bite and smoke hot; careful puffing is required. The tobacco tast has remained similar, a mild, uncomplicated flavor, not complex but not one-dimensional either. I can't clearly identify the casing, but it is closer to vanilla or carmel than anything else that comes to mind. In the final third, the casing has burned off partly, and the tobacco flavor is more clear. It is still fairly uncomplex, but there are several layers, and the taste is overall good. It's mild, when smoked carefully, and obviously comes from a quality blend of tobaccos. Overall, this was a nice, interesting tobacco with good flavor. I prefer other tobaccos to this myself, but I can certainly see where other might like this a lot. If you like mild, high-quality aromatics, you should enjoy this.

Sweet leaves in combination form the basis of this mellow blend presumably designed for an all-day smoke. The Virginia gives it a bold sweetness, and the Cavendish rounds out the flavor, but most of what comes through is the apricot-brandy style of top flavoring. This is one of the better aromatics I have smoked but still, the top flavoring leads to a stingy bite and the concealment of most of the tobacco flavor creates a mild existential emptiness I dislike.