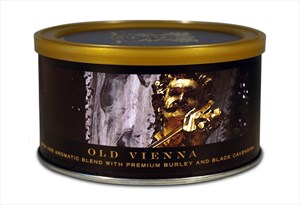 Rich and aromatic blend with premium Burley and Black Cavendish.

Notes: This exquisite Aromatic blend of Premium Burley and Black Cavendish is worthy of the name Old Vienna. For quality is reflected in every puff with this triple blended and triple flavored masterpiece.

The tobacco came a little damp, but I smoked it that way as well as after drying it out a little. The tin smells of vanilla and alcohol. I can believe it is cognac I am smelling.

Smoked, I got a slight chemical smell when I first llit. Either I got used to it or it burned off in the first 1/3 of the bowl. I tasted mostly vanilla black cavendish with a little burley to give it some body and beef up the strength. It was slightly sour in the last 1/3 of the bowl.

I think this blend would improve for me with some Virginia or a slightly sweeter topping. I can smoke it, but it does not punch any of my buttons.

Sutliff Private Stock blends began to show up in collections I was buying around 2015 and by 2016 I had a contingent of them on my show table. Some sold while others didn't and by the end of the 2017 season I knew which ones were the most likely to come home. I started to open them in October this year with St. George's Blend; then in November with Spinnaker. Now, in December, we have Old Vienna and there are more to come. Old Vienna's tin opening was a quiet and non-controversial event and I saw a roughish-cut dark reddish brown to black blend that didn't appear too damp. What I didn't pick up on was a tin aroma. Close sniffing yielded a faint aroma of something, though I initially didn't know what. Supposedly infused with both Vanilla and Cognac, I couldn't find the Vanilla at all. That left the possibility that I was sensing Cognac in the tin, but very thin and faint. Whatever the aroma was, it lasted into the middle of the top third of the bowl and was gone. The remainder of the top half of the bowl was a mild and unspectacular smoke. In the bottom half the Burley spoke up, but rather softly for a Burley. I enjoyed the bottom third the most; the telltale sign of a weak blend. This inherent weak character is the most probable cause of this tin not selling in four consecutive shows. I tried to use Old Vienna in blending, but this was a lackluster effort. So, all in all, two stars.

Age When Smoked: unknown, but about ten years old

Similar Blends: I don't know, as, this is the weakest Cognac-containing blend I've ever smoked and also one of the weakest VaBurs.

A rich aromatic with a smooth vanilla and tangy cognac toppings that do sublimate the tobaccos a bit. The nutty, earthy burley undertones are just noticeable, but become a little more obvious if the tobacco has dried a little. The black cavendish adds some smoothness. Has very little nicotine. Won't bite or get harsh. The tobacco was a little moist when I opened the tin, but it did not hamper the moderate burn rate or leave any goop at the bottom of the bowl. It does leaves a little moisture in the bowl, and needs slightly more than an average number of relights. Has a sweet and slightly sour after taste. Can be an all day smoke. Two and a half stars.

Tin: The Moisture content was good. Very pleasant scent also. The Smoke: The tin note does come through nice when smoked and is rich and very fragrant as the tin description states. I find this blend to be Medium overall in strength. It was along the lines of a typical Aro for me though, with not to many high points or subtleties to it. I find "Molto Dolce" to be a more complex and interesting and enjoyable blend. The first half bowl of Vienna was nice, but the last half went South a bit, for me anyway, becoming Bitey, and leaving my mouth Dry with a chalky taste and feel in my mouth, which I did not enjoy! Again, started out nice but eventually decreased in quality and enjoyment past the 1/2 bowl mark. I give this one only 2 stars only because of the nice aroma while smoking.

I smoke a filtered pipe 99% of the time. I did like the taste and aroma of this a lot. It was just a little too mild for me. I inhale and was looking for a little more strength. I did use this to introduce someone to pipe smoking and he found it enjoyable. Smokingpipes.com has great prices on Sutliffe products.

Purchased From: Free sample from Sutliffe