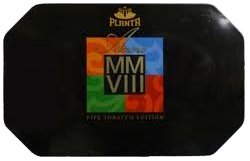 Notes: Planta's Tobacco of the Year for 2008. Still available in bulk from a number of online tobacco sellers.

The rather tart and tangy lemon Virginias are citrusy with a light grassiness, and are the lead component. The nutty, earthy, woody, molasses sweet brown burley is a supporting player with a pinch or two of spice. The unsweetened black cavendish offers some sugar. The exotic sweet and slightly sour fruit toppings seem to contain some mango, kiwi, apricot, clove and pepper-like spices, and I’m not sure what else. They dominate the tobaccos to a fair extent. The strength is just shy of the center of mild to medium, while the taste is a step past that. Has a mild nic-hit. Won’t bite, but will give you a little tongue warmth and tingle if puffed fast, so I recommend a slow pace. Has no roughness. Well balanced, it burns clean at a reasonable pace with a very consistent, rich flavor. Leaves little dampness in the bowl, and requires an average number of relights. Has a pleasantly lingering after taste, and room note. Can be an all day smoke.

So, Sunday, my aromatic day is here again; time flies!

Quite a coarse ribbon which contains more Virginia and Burley compared to black Cavendish. The smell from the pouch is strong, exotic fruits, and my moisture's good.

MMVIII lights without a qualm, and gives a slightly 'unusual' aromatic flavour. The tobaccos don't seem strange, they're basically a VaBur with a smattering of black Cavendish. The toppings cause the difference! With the title Exotic I was unsure if it would be caustic/acidic pineapples, aromatic mangoes, or maybe coconuts? But, after smoking only this today, my subsequent feeling matches my initial one: exotic jam! That's the best label, I feel. Although there's plenty of piquancy, sharpness, alacrity from the fruits, there's also a sweet, sugary character; synonymous to jam! This calms down the fervour from the fruits! On the negative side of things it burns too warm and bites, but back on the positive it burns independently; it doesn't require much work to keep it going!

Nicotine: above mild. Room-note: quite strong; 'exotic', but heavy!

Anno MMVII? Because of the mechanics and bite I'll somewhat recommend it:

Comment = Unsual Fruity Pouch Note and Flavor, this tobacco is Bitter with a big Bit while smoking, not very enjoyable

This Aromatic on steroids falls into my "smells like an air freshener" category. The aroma is so potent, one wonders if some cleaning product died in the bag... in this case it was a pack of orange gummy bears.

The mostly dry leaves have a slightly odd rubbery feel, but are otherwise nice chunky pieces of (more) Burley than Cavendish. This chemical laden witch's brew has no trouble lighting right up and produces some flavors that are about as far south from natural as one can find, again an orange Pixie Stick affair. This is where one would expect me to poucne on this blend for being retched, but there was something here unexplainable. It is unique and warrants a once in great while smoke.

Most folks will dismiss Exotic Mixture as a kids blend, and rightfully so, but if you are in the market for some pipe ghosting tobacco like none other, look no further.

Citrus casing too strong on initial light after charring light...extremely strong for about first third of bowl and then settles back to support tobacco flavor...Needs to be toned down a bit...Perhaps if a bit more Cavendish were used, or perhaps cellaring for a while...

Age When Smoked: fresh after receiving

This stuff is ok but I'm not sure I will ever want anymore of it. The fruit and vanilla flavors leave a slightly weird aftertaste.

Despite it can found in cans, in Brazil this mixture may be also purchased in bulk, not expensive in Brazil, but is hard to find, only few tobacconists have it.

I now other more famous Planta blends: Pergamon, Cellini... I expected a good stuff! really do it. Planta products are very good.

The taste during smoking? have elements od Figs, Chocolate, Pineapple, and spices, such as Cinnamon, Indian Clove and Black Pepper. At the same time that is sweet (Cavendish), is also bite (Burley) and peppery.

The Burley and the Cavendishs are clear noted, over the Virginia, but the mixture have good body.

It s destined to be one of my favorites, even better than Cellini Forte. Splendid! 4 Stars but merits much more.