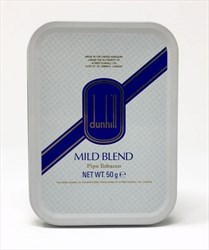 A blend of fine Virginia leaf from the USA, Brazil and Zimbabwe is pressed to meld and enhance its character. The tobacco is then cut and rough rubbed. Finally, Red Cavendish and Bright Virginia are added to provide a mild, well-balanced smoke.

I purchased Dunhill Mild as an estate tobacco. This tin was unopened and the previous owner dated it Nov 2003. I have only smoked one bowl so I may be updating my review. It tasted more like natural tobacco with a slight spiciness that I cannot pin point. The mild label is a little misleading because I found it to have a slight kick to it. A good natural tasting tobacco. Update. 5 years later I smoked a second bowl from the same tin. The tobacco was really dry but still tasted good. I believe they do not make this anymore. I have 6 tins left.

From a tin marked 3-1998, this ready rubbed/ribbon cut is drab tan/brown in color with a hefty tin nose of pure tobacco with just the faintest whiff of perhaps honey. Came fairly dry. Needed a bit of rubbing out to load properly and then off to the races.

Ah, when Dunhill was "Dunhill"! I miss those days. Very nice pure virginia tobacco taste, of the African variety. Mild in taste but fairly potent in nicotine, although not head-swimmingly so. This exhibited some mild tartness and a fair bit of earth but it wasn't deep in flavor. This reminded me a bit of Gold Block but with a bit more machismo. This was also sweeter, with the addition of the red cavendish and the smidge of bright Virginias, but not overly sweet. It was quite well balanced and enjoyable, although not something to stock up on, particularly at the price I paid. It's sort of a "leveling" tobacco for me... something to smoke that won't overwhelm my senses but that has good, if light, flavor. So this is recommended as a tobacco to smoke, but for the money, I'd advise you to look elsewhere. Nothing really stood out here to make this something to mortgage the farm to find.

I have been spreading out my remaining tins of Dunhill Mild Blend for the past few years and given the price some are getting on auction sites, I think it’s worth a comment or two. The age of the Virginias, along with Red Cavendish has made this blend quite sweet. Image an aged tin C&D’s Kajun Kake, minus the Perique and you have Mild Blend as they share similar components and similar flavor. Like many of the older Dunhill blends, the tobacco is of high quality. It is ready to smoke right out of the tin. The ribbon cut is on the thicker side with some broken flake like many of the Murray produced blends so it burns at a slow rate making it easy to sip. There is no bite, and contrary to the name, I would say it is on the medium side in the nic department. If you like an extra sweet Virginia, this is worth a trip down memory lane.

In the beginning there were men, many of whom smoked pipes. And, not so very long ago, these men weren?t viewed as quaint or abhorrent, but as men doing manly things. Dunhill produced the world's finest pipe blends for these men. Today, Dunhill outsources tobacco and merely puts its name on it, and civilization, in even a minute way, is less rich for it. A lone tin of Dunhill Mild found at a suburban Chicago tobacco outpost reminds me of the kind of tobacco men smoked a generation or two ago. Mild is Dunhill?s glorious achievement of European Virginia tobacciana at its best. Flanked with just enough creaminess in its base and the perfect hints of oak and nut, Mild is representative of gentlemen, pipes and the fastidiousness of English blending. All these glowing reviews here about other Dunhill products must be referring to what was accomplished on English soil prior to EU manufacture. With Mild never is there any bite or nicotine overdose, and all you taste is rich tobacco that never under or overwhelms; imagine that! If you ever find any tins of Mild laying around, horde as many as you can, for like the times and the world it represented, it shall never pass our way again.

Well, I?m not a sonnyboy, but I have to agree with the first reviewer. I?ll try to describe my experience a little more gently so as not to hurt anybody?s feelings.

One thing that is peculiar to Dunhill is their consistent use of the word ?mild? for flavor, not nicotine. Royal Yacht is labeled ?extremely mild? for example, and by Dunhill terms, I agree. But I prefer the term ?subtle?, and I tend to like subtle mixtures when they are also mild in nicotine. This, like any Dunhill blend, is well crafted. I love the first puffs of it.

Nicotine sometimes decreases my enjoyment of an otherwise fine tobacco by dulling much of my sense of taste. Some taste remains, but is off-balance, skewing the response especially to added flavorings. Whatever this is sauced with (and tastes fine at first) soon morphs into something nasty. I suspect this is why many despise RY and 1792, both hi-nic flavored mixes. It?s a tongue thing. Sometimes it works to my advantage; I like RY, but mostly because of its smell. I taste very little of it. Or much of anything else for a while.

While I agree with most reviewers, including the first, that the nicotine is just average in this blend, it is enough to render the intended subtle tobacco taste null, leaving only mutated residual ones. Sometimes they can be off-putting and well, nauseating. Caused by nicotine strength? Yes, but indirectly. It?s not inexperience or immaturity (that shows up in other ways), but chemistry. A shame, but I can?t smoke this blend either.

Bottom line: I avoid subtle tobaccos with medium or higher nicotine. Flavored hi-nics give me the most trouble, and it is why I suspect most other smokers gravitate away from cased tobaccos with time.

Your tongue may vary. You?re lucky if it does.

As a fan of Standard Mixture Mild I ordered a tin of this after reading Pipestuds' review. A quality blend that suits me fine as an early morning break time smoke. It won't have much impact on your tastebuds if you are into the stronger blends first. Give it a whirl early in the day for best results. It also burns well with minimal fuss. Recommended for the Latakia weary.

If you want a very mild tasting tobacco, this is good, natural (you can barely detect a whiff of honey flavoring in the tin aroma) and honest. The irregular cut betrays the presence of many pieces of broken flake, which is also responsible for a very slow and regular burn rate. My problem is that I can't find any interest for such a bland and delicate blend, which bores me to death.

After reading the above neophyte's review of Dunhill Mild Blend a couple of weeks ago, I immediately scrambled for the phone and ordered a tin. Usually, if a young pipe smoker can't handle the nicotine of a blend, well, that's my blend. I love Royal Yacht (my all-time favorite), and it's potent and tasty. The kid who did the previous review of Mild Blend better run from Royal Yacht. A bowl of that stuff sonny, and you may never get up off the ground!

Mild Blend--in typical Dunhill fashion--is not at all mild. It is uncased, straight forward quality leaf that provides a cool, smooth smoke. Upon opening the tin you will catch the aroma of honey--not raisins for heavens sake!--and once packed, it will stay lit well and burn mostly to a dry ash.

Mild blend is very similar in taste to Orlik's Golden Sliced. It also tastes like Royal Yacht without the casing. So, if a great tobacco taste without fluff is your bag, check this stuff out. If, on the other hand, you are like the neophyte who first reviewed this blend, steer clear or risk missing church because you can't drive!

This tobacco by Dunhill is not to be confused with it's more easily found relative, Dunhill Standard Mixture Mild. According to Pipe Magazine, this orange and brown finely-cut tobacco it is primarily a blend of Virginia tobaccos and Cavendish.

As a beginning pipe smoker, I wanted to try something a little more classy than the regular drugstore brand of tobaccos. (Dunhill, you can imagine, has somewhat of a reputation of making fine pipes and tobaccos.) The Pipe Magazine web-site describes the taste as Vanilla/Chocolate, and with Mild in its name it sounded like the perfect place to begin. The tin smells nice, and the closest thing I can compare the scent to is raisin bread. The first time I lit it up I couldn't make out much taste at all to it, but it didn't take very long for me to get faintly nauseous.

I tried it again a few months later and confirmed my suspicion that the faint taste that it did have was really quite awful. I can't quite place it, but perhaps reminiscent to smoking a raisin. Combine that with the queasy feeling it gives me I'm fairly certain I'll never put this stuff in my pipe again.

This is a new favorite of mine! Great Dunhill presentation. The aroma is rather neutral tobacco smoke ? no complaints from my wife. The tase? I don?t know. It reminds me of some davidoff cigars, some kind of grassy notes. It must be the slightest casing, but it remains on the background. Weird. The Mild in Mild blend is indeed mild on the palate, meaning no extreme tastes. You could smoke this one all day without tiring the taste buds. But quite nicely, it packs some punch. When you?re not in the mood for latakia, not for cavendish or aromatics,but you want a smoke of character and you can?t quite decide WHAT you?re going to smoke this time, try mild blend.

Another classy blend from Dunhill. Upon opening the tin, I smelled faint notes of raspberry - not fresh, but as if they had been baked (Raspberry Pie). That peculiar scent is not present when lighted. The cut is quite uneven, so it may be a little hard to pack. This blend is not the stronger version of Ultra Mild Blend. One could believe that when seeing the design of both tins. They are both very unique blends, despite the tins weak design.

Mild blend tastes better though, It is more stout and the smoke is spicy, intense and thick, especially from mid-bowl and down. It takes a while for Mild Blend to develop that fine Dunhill-taste many of us love, but when smoked slowly with patience, you will be regarded with - in my opinion, one of the best "bright-orange-VA-with-a-pinch-of-cavendish-blends" ever made. Outstanding!

October-2003. Dunhill Mild Blend is exactly that 'mild' Good for new comer's to pipe smoking,or someone who want's to step away from sweet tooth heavily cased Aromatic tobacco's.Can be easily used as an all day smoke.