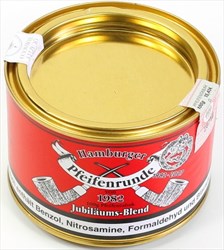 Not having tried the original "Hamburger Pfeifenrunde von 1982" blend, the description of this, the 25th anniversary blend, was still enticing enough for me to order it.

On opening the tin, at first, I smelled, basically, nothing. Some Latakia, and that was it. After a day or so in a mason jar, I could make out that there was some sort of topping applied, and there are Orientals in there; I cannot define the topping though.

It's an easy-to-stuff ribbon cut that burns down to nothing and is easy to maintain; the room note is pretty much standard for an English, but has a mysterious (and not necessarily in a good way) addition to it I attribute to the top flavour applied. The blend is gently spicy as advertised, but for me, while it is not a bad blend, it is just too much of an average affair.

Not a bad smoke, but I prefer much more character in my tobacco. I will finish the tin, but won't buy more. A mild dry white wine should go well with it.