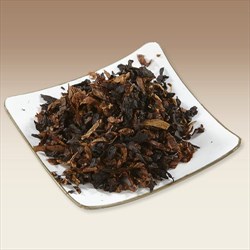 Historically, here in the Northeast, our forests are littered with lines and lines of old stone walls. Built throughout the centuries to designate one mans land from another, they were often the site of casual conversations between neighbors. Scotty has devised a smooth casual blend to keep in that tradition of social congregations. Toasted cavendish, burley and golden Virginia season with just enough Cyprian latakia to produce a cool-smoking, sweet full bodied, slow burning tobacco. Pick some up today and enjoy it with a friend.

I can't believe there are no reviews for this blend yet. Picked up a few ounces from P&C to sample. Wonderful tobacco flavor, cool, and slow-burning with lots of thick, rich, creamy smoke. Great for anytime of day, but particularly good on a cool autumn morning or a cold winter's night. Reminiscent of Boswell's Northwoods. I'll definitely be ordering more. Four stars.

This is a really great all day blend. Similar to Bald Headed Teacher or Barking Dog, but a wee more complex. I am a big fan of BHT but at times it can almost cloying. Stonewall, even with its cavendish element, has a great flavor profile from start of the bowl to finish. I can't believe there are not more reviews of this fabulous blend.

Very nice tobacco. Very gentle on the tongue, no burn at all. Flavor is more subtle than many traditional English blends. Others in the room did not even know I was smoking, so the room note may be very subtle. I would definitely re-purchase this blend.

Two weeks after my initial review - I can now say that is has become one of my favorite blends (September 2014).

Tin (baggie) note is a mix of hay from the Virginias, sweet vanilla from the Cavendish, and a faint whiff of barbecue from the Latakia. If you like lots of Latakia then stop here. For you, the best part is over.

Once lit, it was pretty much the hay of the Virginias and what I suppose is sugar casing that took center stage. I know this is billed as containing Lat, but it smokes more like a sugar-heavy aromatic. To my tastes, there’s an off note, like some of the tobaccos are clashing. It might be the small amount of Latakia clashing with the other ingredients. It is reminiscent of (I hate to even say this): vomit. Yup. Tastes like I just upchucked. I thought the blend might’ve been fighting with a ghost in the pipe at first, but four different pipes later and it’s still off in my opinion. What’s worse is it left that taste in some of my pipes. I’ve tried it over and over, but the more I smoke it the more vile it gets. I can see some people that aren’t tasting the off-putting taste liking this if they have a sweet tooth, because it is sugary sweet. Tasted like the untopped base blend for an aromatic with a token amount of Lat tossed in. To me it doesn’t offer anything that can’t be found in many Virginia blends with far less ingredients, and the “off” taste takes it off my list to re-order.

Burns at a moderate pace and is easy to keep lit due to the shaggy ribbon cut.

No nicotine to speak of.

I hate to break up the love-fest here, but there’s no way I can give this four stars. I can somewhat recommend this to someone transitioning from aromatics to Englishes, (assuming they don’t taste the same vomit taste that I can) but I’m not a fan. I won’t order any more of it. Don’t think I can even finish the three ounces I ordered. Not for me. Maybe some age will help it?

I feel like one star is the most I can muster here, but since others seem to like it, decide for yourself.

UPDATE: So after letting this sit in the jar for a couple of weeks, something possessed me to try this again. I’m pleased to say that the rotten upchuck taste has mostly gone, and this is now smokable. I wouldn’t expect much change in two and a half weeks, but it has definitely become better. Still not anything great in my opinion, still tastes like an aromatic with such a high proportion of Cavendish, but at least it’s smokable now.

I’ll bump the stars up to two.