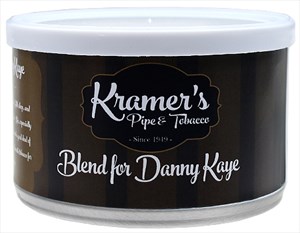 Danny Kaye was a regular at Kramer's Beverly Hills shop, and they created this blend, a variation of New Mix, especially for this great entertainer. A little perique and a good deal of Latakia are mixed with a touch of Irish aromatic tobacco for an enjoyable, all day smoke.

The buttery sweet, floral, herbal, earthy, woody Oriental/Turkish spice is just a little more obvious than the smoky, woody, earthy sweet Cyprian Latakia. The Virginia offers tart and tangy citrus with a little grass and earth, and forms the foundation of the blend as the major component. The Irish mist is very mildly applied, and works well with the other components instead of competing with them. The strength is at the center of mild to medium, while the taste level just reaches the medium mark. The nic-hit is a step below the strength threshold. Won't bite or get harsh. Has a very consistent flavor to the finish. Burns clean and cool at a reasonable pace, and leaves little moisture in the bowl. Requires very few relights. Has a pleasant, lightly lingering after taste, and room note. An all day smoke.

The first review by thedstnguishdgntimn hits the nail on the head with his observation that this is very similar to English blends made by another famous old pipe shop, Peretti's of Boston. It has the look and feel of a Peretti blend. Danny Kaye is an “old school” American English that is balanced with just the right amount of Latakia for my taste. It also has an underlying sweetness that serves as a nice addition to the blend, but it isn't an aromatic. Each component tobacco plays well off of the other, without any particular tobacco dominating. The rough cut is easy to pack and it's clean burning. I enjoy it well dried as it seems to bring out the best in the blend. Danny Kaye isn't the best English blend I have ever had, but I would have no reservation in recommending it. Three and a half well deserved stars.

The smoke: I like the quantity of topping in B.F.D.K., it only gives a mild embellishment, rather than a smack in the face of falseness. Neither does the Latakia domineer the flavour with acrid smokiness, but more of a rich woodiness. The sour Orientals take charge, and as a bowl progresses seem to become more sour. The burn's good, even if it's a little fast, and I only get a smidgen of tongue bite.

The room-note: nice. The nicotine: medium.

This is a nice smoke, falling just shy of four stars.

I had the pleasure of sampling this while in California and the once again at the Chicago Pipe Show.The best way to describe this blend is very Peretti-esque.An extremely old timey English blend. The Irish aroma is what I would call a lot lke the Belmont Mixture by Peretti. Not sweet but aromatic. The Latakia is noticeable and the oriental/Virgina components add a smoky/bready taste. The room not is pleasant while smoking but turns a tad rank afterwaards. No Bite and absolutlely lovely. Well worth a shot for those who remember Wilke & Barclay-Rex.

With Kramer's Blend for Cary Grant having already overcome my reservations about the Irish Aromatic component, I decided to also give Blend for Danny Kaye a try. I expected the blends to be more similar than they actually are. Mr. Kaye's blend is more Oriental-forward. Oddly, though, I feel that the grassy Virginia leaf stands out more at times than in Blend for Cary Grant. The Latakia and Irish Aromatic are, to my taste, somewhat less prominent relative to Blend for Cary Grant. The tin label says there is "[a] little Perique" here, and it must be only a little. I was never sure I could pick it up in the flavor.

In terms of nicotine, this blend is very mild in strength. The taste is medium on account of the heftier Oriental punch. The blend burns well but requires some relights and leaves some dampness in the heel.

Like Blend for Cary Grant, this will not be a routine smoke for me. I do recommend it, though. I plan to buy some in bulk to keep around as an occasional smoke.

Certainly an English tobacco on the lighter side, perhaps the added "Irish Mist" softend things up? I will attest that some flavoring has been added to the typical spicy/charcoal English mix, what it is I can't say, but it reminded me of a Carmex (chapstick) smell livened up with a "wet mist" air freshener. It was a curious take on an English I was eager to try.

The moisture was great out the bag, filled with a medley of light and dark ribbon bits. There were some occasional blobs (nickel sized leafs that passed through the shredder and wadded up), which caused some air flow issues and relights. The smoke had a milder Latakia and Oriental taste than most Englishes I've tried and the added flavoring produced a mild soapy flavor I quite liked. Not much bite and a mild/medium nicotine hit.

The complete package might wear on the buds as an all day smoker, but it is certainly a great occasional smoke. English fans should enjoy this well crafted blend for changing up the usual profile.

Second blend I tried from Kramers after Father Dempsey. I liked this better. It has a noticeable latikia taste with some natural sweetness. The added Irish Mist topping nails it. A great semi-sweet English blend.

Ok. I read the other reviews and it's time to add my two cents. I've come to love Kramer's blends. Father Dempsey is my favourite. This one is a close second. This to me is a English aromatic. I'm always trying to find a tobacco that I enjoy but passes the sniff test with my wife. I love English/Balkan blends they're damn near perfect for me. This is a winner. I'm not going to bore you with a bunch on inane flavor details. It's good English blended tobacco with a touch of flavouring

Of the small number of us who have both smoked and reviewed this blend, about half of us believe this to be an American style English mixture and I don't disagree. However, for me it was more of an American style English gone slightly wrong mixture. I bought a 10 oz jar of this blend last May, smoked a bowl and put it away for future scrutiny. I took it out recently for a closer look and this is what I found. The bulk appearance is of a uniform brown to darker brown to real dark brown nature in a broad ribbon cut. I reached in the Mason jar with my fingers and pulled out a "wad" big enough to fill a bigger pipe. In that amount were eight woody sticks of various sizes and I join reviewer StevieB 2017-06-27 in my complaint. The bulk aroma was interesting and my sniff test revealed Latakia and Perique among other tobaccos. The Irish Mist infusion must have partially evaporated over the last five years, as it's presence was a mere suggestion. The overall impression was that of a fairly strong mixture. On light up some confusion entered the picture with the smoking taste and aroma being rather mild. This is in strong contrast to the blend's very noticeable, and sometimes approaching harsh, feel on the tongue combined with it's strong bulk aroma. This blend never actually bit, but did nip persistently all through the top half of the bowl. Now for something positive: the best part of each bowl occurred in the bottom third. The blend took on some added taste strength and the aroma approached that of many medium English blends we have all smoked and enjoyed. So, in the final analysis, I join the small crowd of three star reviewers and recommend Danny Kaye mixture as a somewhat exotic American smoke.

Similar Blends: not quite anything I remember smoking.

I can picture Danny strolling down Little Santa Monica Boulevard waltzing into Kramer's before a taping of The Danny Kaye show down at CBS. Purchasing a few ozs, and tipping his hat to Tina as he exited the store.

Been wanting to try the Kramer blends for a while now, so I ordered all of them from Smokingpipes.com. Appears to be the same composition as New Mix, minus the aroma of the Irish Mist. Smells sweeter than New Mix, but not as sweet as Cary Grant.

Superb pouch moisture on arrival. The perfect amount of exceptional Latakia, and just the perfect touch of Perique to be seen. The Virginia addition is tongue bite safe, as I am susceptible. I have a lot of respect and admiration of StevieB below, and find we have a lot of the same tastes. I'm glad I didn't have the issue with the stem pieces like him and several have mentioned.

Packing I learned to go with a lighter hand than usual. I found it would burn a bit uneven and even diminish the smoke if packed too tightly

Initial lighting took a few tries on my first couple bowls. After I learned to pack more gently, it was the old light-tamp-light scenario.

Once settled into the bowl, I fell in love. The Latakia presents with a slight woodsy but very leathery aroma. Doesn't have a huge punch. Every once in a while, the Perique showed in the background. The sweetness of the Virginias and Irish Mist balanced well with the smokiness of the Latakia and sourness of the minute amount of Perique. Similar genre to Boswell's Northwoods. After smoking heavy Lat bombs all winter long here in Michigan, it is a nice welcome and perfect transition smoke. I have no problem recommending this to those new to English blends, or those who are seasoned. 4 stars for me!

When I opened the tin I found the content very wet. I was not patient enough to let it dry properly so i lit it after 1 hour of drying and it took just two relights and it was done. The flavour is familiar and otherwise not to me. I smoked a lot of flavoured english blends and was a little reminded to Perfection of SG or Black of Low Country . But I would say the scent is unique and very delicious. But one more time I missed the strength , promised here by the members. It is far from medium. Also far from mild to medium. It is mild at most. Mild like any aromatic blend like Captain Black . 2 Stars for the strength and 4 stars for the very unique flavour so Itotalize it to 3 stars