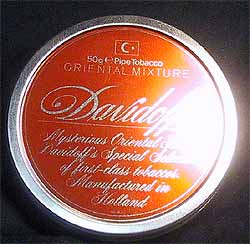 The cool thing about this blend is that it's different . Yeah , it's got some top note on it .. plums or whatever , but it's not the run of the mill oriental . People want to rag the davidoff name for what ever reason but on it's own it's a cool smoking well burning blend . If yer looking for " another " oriental blend like the rest ... this isnt for you .If you're looking for something different by way of oriental then it's worth a try . Hell , somebody out there must love it cause it's been around for at least 13 years to my memmory

Typical Davidoff bravado: high priced, designer label, she she packaging, ingenious snob appeal marketing. Like the cigars, not bad, but definitely not worth the $12+ per stick sticker shock. Distinguished Gentleman is correct: plum slivovitz. The tin aroma is what's best about this. Taste is hot and muddy in the pipe, and about all I could look forward to was exiting my car so that I could find a place to spill it out. I don't like the direction European blends have been heading. This is a poor version of an inferior Dan Tobacco product. Even on sale, hardly worth the try. The tin says 'manufactured in Holland.' Could this be Dutch Reformed tobacco?

One of five stars

This one smells out of the tin like Ox Tail soup. The only time I ever ate/drank a bowl of ox tail soup I remember wondering, "where's the beef?" I did not ask the same question after smoking a 15-year old tin of Davidoff Oriental. Plenty of beef in this one with lots of spice and flavor. Davidoff Oriental Blend is difficult to pack without first chopping up the leaf. It burns cool and dry and I really liked this one.

I did find one positive; If you dry it some before loading and lighting, it will produce a cool smoke.

This is "Danish" Oriental. By that I mean a sweet virginia with about four flecks of Latakia included. Ok,maybe there are at least ten flecks of Latakia in the mix. The tin aroma is light and does not smell like an oriental at all. It does however smell like a nice cavendish with a light spiceyness. The cut is ribbon and packs very well,and lights well. The taste is like it smells in the tin,a light spiceyness but very light. The sweetness of the toping and the Virginia is mostly what I taste. Please don't get me wrong,this is not a bad smoke but I just don't see that it should be called an Orinetal. Looking, for a good oriental? Skip this one.

This was my first brand name Oriental, so I was expecting something to sink my teeth into, but what I found was not much. It smells like an orange flavored tea--not good. In Davidoff's defense, I don't like any fruit or berry flavoring in my tobacco, so if you don't mind some orange, bear this in mind as you read.

That said, I wanted something more, something more exotic--more Latakia, less Virginia and other pale tobaccos. But such wasn't the case. This could easily have been packaged as a Danish aromatic, and a light one at that. Again, nothing inspiring or noteworthy.

A GM car with a Rolls Royce price tag is still a GM.

I find the lack of individuality and sense of direction of these "corporate" Davidoff blends thoroughly depressing. Is this the way of the future?

It took a few bowls to figure it out and be sure of it, but I get the feeling that someone, not sure who has been trying to copy either this blend or Mac B's Plum Cake....Not a bad thing to do in my book. The only two big differences that are readily apparent after three or four bowls of this baccy are the lack of Latakia, and the lack of bite. I find I don't have to pay as much attention while smoking this as I do the MB. Although, I do miss the Latakia from time to time, so I guess I'll have to keep both on hand! The tin does in fact smell of raisins, stone fruit and some sort of molasses laden cake. If you have ever had B&M brand brown bread that comes in a can, you will be really surprised when you open this. You won't know if you should eat it or smoke it. It really doesn't develop, or "go anywhere" as you work you way down the bowl. It behaves well and the tobaccos are obviously quality leaf. The only big problem I have with this stuff is the amount of sticks and stems I have to sort through when loading my pipe. When I pay almost ten dollars (US) for a 50g tin of tobacco, I do expect a bit more effort to be put into quality control. If you liked the Plum Cake, but had problems with bite, give this a try.

Plums! Orientals and Plums! A strange combination indeed. The jury is still out on this one. This is truly an acquired taste. It packs easily and burns cool. The only thing is the flavor is so strange. I like oriental mixtures and this one is good-not great. If you can get it for cheap it is worth a try.

Davidoff's Oriental Mixture is like no other oriental: but that is no compliment to it. I have never been able to finish a tin. There is something there though which reminds me of the taste and smell of inexpensive hookah tobacco of fifty years ago

The tin of Oriental Mixture that I tried was at least 4 years old, and I think this had a significant effect on the leaf.

A musty, sour smell creeps out of the tin upon opening. The leaf itself is not physically remarkable, actually sort of homogenous brown with a few black specks here and there. That strange exotic scent keeps growing out of the tin, inticing one to pack a pipeful.

Since my tin was aged a bit, the moisture level was actually right-on and one solid light gets a bowl going. This really does seem to be blended by folks who make cigars first and foremost, but I wasn't disappointed. OM is a unique blend that tastes unlike anything else I've tried, and while it doesn't deliver a huge nicotine kick to the head, it does provide some nice cigar-like nuances without having overt, harsh "cigar" flavors.

A special-occasion blend to be sure, but one worth keeping on the shelf.

This is a unique tobacco. Pretty good to a Oriental smoker. Not a four star really but better than three. I actually prefer it to Dunhill's Durbar. I do prefer the more subtle blends so don't look for an "over-the-top" tobacco.

I found this to be a rather odd tasting Oriental, more sweet than anything else. It has good burning qualities and packs well, and the flavor is different and pleasant, but it isn't an Oriental blend in the sense that we know it.

Tin Aroma: Upon opening the tin, I was hit with the overwhelming aroma of the casing, sort of an orange rind and fruit-cake smell.

Summary: Good tobak, but more a Danish cavendish than an oriental blend.

Well, this tobacco was a surprise (as many have noted). It is mysterious indeed for I expected to find the usual smoky character of Latakia and some Turkish, when instead I found little of both. I highly doubt there is much Latakia in here. On the other hand there might be some Turkish, for it is sweet especially at mid-bowl. This mix doesn't bite too much, it is a pleasant lightly aromatic mixture. I would advice it for the first pipe of the morning, or at least that's what I have been using it for. All considered it's not a bad buy, but it is rather pricy.

On the tin of this stuff it says- Mysterious oriental blend, well- that it is. In the tin it manifests a sour pungency, slightly smokey & rumlike. So it seems there's alcohol in it (perhaps rum ) & some latakia is evident(not much). Like other Davidoff blends the cut is thin & fine, packs easy & is trouble free. It smokes with a clean & smooth temperament, not sweet- but a little spicy & medium strong in taste, with that rum? casing lingering throughout the bowl. Yields up a fair dose of creamy-rich smoke. The latakia is faint -more noticeable earlier on. OverAll a decent quality pipe-weed, recommended to anyone who likes English/Oriental??? blends. review updated & down-rated ( & chilled down a bit , I'm not as keen on this blend as I once was).

I'm not as keen on this tobacco as the previous reviewer, but I still enjoy it every now and then. It is a fine ribbon cut similar to the Davidoff English mix, and it does pack, light and smoke well. The scent, on opening the tin, is similar to a dry orange pekoe tea. On lighting I get a fairly strong dose of the casing - also orange-ish, but not sweet, that tends to overwhelm the tobacco. As it smokes down the bowl the flavoring fades and the true oriental flavor of the tobacco kicks in. It is a creamy smoke, without bite or excessive moisture, and leaves a nice room note. As with other Davidoff products a bit more expensive than other tinned tobaccos. Nice for an occasional change. 6.5 out of 10. - Kelly