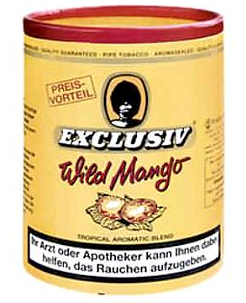 A mixture of bright and cavendish tobaccos with a distinctive mango fruit flavour.

Notes: This was moved from Gawith & Hoggarth, which does not manufacture it.

The blends aroma brings summer to mind, it's fruity, tropical and fresh. Although it smells well cased it isn't sticky to the touch.

The smoke? Just like in the unlit aroma the mangos come through clear. The topping's fairly formidable but not so much so as to mask the tobaccos completely: the Cavendish gives a honey-sweet Virginia flavour. The burn isn't so good, it's way too fast. It doesn't give me any tongue bite unless puffed recklessly.

Not my cup of tea:

As has become a habit for me, I don't usually expect a lot from aromatics so I wasn't waiting to be impressed by this one. Still, I thought it worth a try as a well known baker of mango crumble so here goes.

The tin aroma is hardly surprising as these are always pretty spot on. Packing and lighting go well too. I was pleasantly surprised by a decent hit of mango as opposed to the usually insipid flavouring of these tobaccos. This does fade after about a third or a half of the smoke and fades into a more toffee come currant bun flavour. It does get a little rough at this point but it's no really biggy, certainly a lot less than Erinmore mixture which the last half of the smoke reminds me of. As for tonguebite, there was little if any, in spite of the roughness.

So on the whole then, a good decent smoke. I did struggle with the rating on this one. Not sure it's quite three stars - it doesn't rate favourably against American Sweet Peach, another three star tobacco in my opinion - but ranks far more favourably that all the the two star tobaccos I've smoked. Probably deserves 2.75 stars to be honest, but 3 will do reasonably well in the mean time.

A nice "starter" tobacco, this requires a very gentle and steady approach if you want to avoid 'bite'. The flavor is very obvious and is extremely fruity, but draw a little too often or too much and you will get 'bite'

Requires relighting frequently, even after being allowed to stand on a tissue for 30 minutes.

Uuaah. When you open the pouch, it smells good. Like fruits. But no taste of the promised flavour. Just bitening hot air. I ve often read about artificial flavouring. To me, this is the "perfection".

a nice gruity offering for those summer days when you have cocktail in your hand and you want a light tobacco matching it or on those winter times when you want to smoke indoors and not be damned because of the smell. the coarse cut blend comprises of dark and bright leafs with decent casing and moderate moisture. not a tobacco to smoke subsequent bowls from as it tend to burn on the hot side however it burns well and even leaving nothing but fine white ash. a nice pace of change for aromatic lovers who are looking for fruity edge.