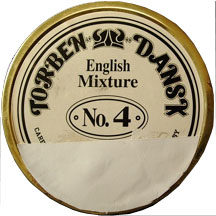 Similar to No.1 but with more latakia. This blend artfully combines the rich smokiness of Syrian latakia with the natural sweetness of the blended Oriental tobaccos.

Excellent Syrian Latakia in a very well balanced - in taste and strength - mixture. It is a mild-medium tobacco, perfect for an all-day latakian smoke. 4,0/5 in my personal rating system.

Previous reviewers said all, probably this one of the mildest EM ever produced, it can't be satisfying if you are used to smoke a Lat bomb for breakfast but, in its class, it's a winner. Mild, restrained, well mannered... yet pleasantly sweet-smoky-grassy-spicy, everything is subtle but discernible and nicely balanced, I got the best from it in medium-large bowls (especially with a bent smooth Mastro de Paja Castanea) with a quite loose loading and softly tamping. Room note passes wife test.

Going through the various Torben Dansk blends I had so far neglected, this one's number (#4) came up. There isn't much to say about it, really. It's a standard English, a ribbon containing VA, Latakia and Orientals, and the blend, while mild, is in no way a "poor imitation" as had been insinuated in the first review of this 'baccy.

It's the typical bright-brown-and-black ribbon I expect of an English blend, and the tin note is somewhat sweet: good VA in there. Packing and lighting is as would be expected, and the taste is very much English. The room note is a bit more VA than English, and there is enough sweetness in the taste to make it interesting enough compared to, e.g., the current incarnation of Early Morning by Dunhill.

It is very mild, though; I could use this as an all-day smoke before switching to the heavier calibers towards the evening. I found that the whole experience of this blend improves markedly after smoking it in the same pipe a few times, so that may be the key to enjoying it.

In the final tally, I like it. I like other blends more, so probably won't buy again, but it's not bad at all. 3 solid stars, and a good Darjeeling 2nd Flush or Dimbula tea seems to fit it rather well.

Firstly it?s to say this one isn?t an U.K. English Mixture, but a poorer imitation of, by Dan Tobacco. On the opening I detected some well-distinguished Latakia flavour mixed with other spicy odouring leaf --I guess orientals have to do something with this. Not much humidity present in the mixture, ribbon cut, helped to pack nicely and light rather easily to offer a very cool and light smoke without any harshness, or would I say creamy? Flavour is welcoming, but taste too light to be real. In fact this mixture is without strength and character. Hoping on something better towards the last third of the bowl, I got less flavour --latakia left me alone to puff out some tasteless, but still somewhat pleasant smoke --you know, the one you don?t have to care too much about, puffing around easily. When, towards the end, combustion went off, I didn?t have any interest to light it again, getting nothing else but simply burning staff and so emptied pipe. Since my first try on this mixture and before deciding to operate some ...changings, I?ve got 2 or 3 pipefuls, but nothing more added to the first to get it less annoying, so promptly I decided to add some dry, long opened pouch of Balkan Sobranie -- let?s say a 10-15%. mixed well, left plugged about a week to amalgamate tobacco flavours, I tried again and ...surprise! the thing came out to an awesome smoke!

Well, what I got after mixing isn?t TorbenDansk N°4 EM; it?s really something else that confirms that blend?s quality isn?t, of course, that bad, but simply lacks strength and latakia flavour.

Room note --if you care-- is only smoky, tolerable.