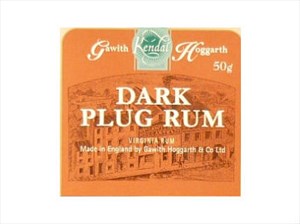 A very strong, but very cool smoke is the result of combining in equal proportions only Malawi dark fired leaf and Indian dark air cured leaf. You can smell in this tobacco the smokey flavour of the dark fired leaf derived from its curing process of being hung above smoky fires, and the sweeter, yet still strong 'cigar type' flavour of the dark air cured Indian leaf. With added rum flavour.

The Virginias are a little grassy with a lot of earth, wood and tangy dark fruit, some floralness, and a touch of tart and tangy citrus, cigar and spice. The burleys offer toasted nuttiness, a little molasses, and wood, and are very earthy in an important support role. The Virginias generally lead, but the burleys occasionally fight for attention. Most of the time they compliment each other. There’s a light Lakeland essence that mostly disappears, and comes from being in the factory as it’s not added as far as I can tell. It’s subdued by the presence of a strong rum flavor that lasts all the way through the experience, though it doesn’t drown out the tobaccos. It's has a fullness of flavor and strength. Has a fairly strong nic-hit. It’s not quite as strong as the flake version. Needs prep and dry time. No harsh or dull spots to be found, and it won't bite. There are a few rough edges. Burns clean, cool, and slow with a very consistent, sweet, earthy, woody, lightly floral, mildly rugged flavor from start to finish. You may need to stir the tobacco up on the last quarter of the bowl to burn it all up. Leaves a little moisture in the bowl, and requires a fair number of relights. The pleasant after taste strongly lingers, and the room note won’t make you many friends if they are non-smokers. Not an all day smoke, but you already guessed that.

As other reviewers have said, the pouch note is decidedly strong. I actually find the note from the pouch easier to identify as rum in comparison to the flavour. From the pouch the plug is a very dark brown and sadly it's soaked to the core, I like to slice it and leave it to air when cut. As I said, the rum is more striking in the pouch note. It comes through in the smoke but seems a little more nondescript, alcoholic but it's not too clear about what form of beverage has been included. The smoke is pretty cool and I don't get bitten by it. Unlike the flavour, an area where there is no ambiguity is the nicotine amount. It gives me a good dose of N! I find that at about the halfway point the rum seems a bit clearer, it's still not overly so but I definitely find it easier to identify as rum instead of it being really nondescript. Providing it's been allowed to dry off some the burn is good but when smoked whilst damp it is a bit mischievous!

Somewhat recommended as I find it neither great nor rubbish.

I've already sang my praising hymn to Gawith Hoggarth's line of Dark Tobaccos in my review of GH Dark Plug. I won't copy and paste my Dark Plug review here, better I just shortly summarize my humble opinion that GH Dark Plug is nothing less than The Best Tobacco In The Universe. I repeated the same stance in my another review of GH Dark Flake, adding just that I didn't like very much the Lavender essence which the Flake variety is lightly sprinkled with.

What I may add regarding the Rum Plug avatar of the same tobacco?

Actually (and luckily) it's all the same as the grand GH Dark Plug - plus subtle, sweet, fragrant and pleasant application of some decent Rum. I like this combination.

Rum aroma is short-lasting and evaporates very fast even in a closed mason jar (which proves, by the way, it's a real Rum, not some synthetic chemical agent). Still, what you have afterwards is the good old unscented Dark Plug (which, in my opinion, is the best tobacco I ever tried).

I just received a small, very thick strip of this via a trade with a friend in England. Anyone that gives you chunks of this stuff is going to rate pretty high on your list, pretty DARN high. An expanded review will follow several tests...but I felt compelled to post this preview comment:

OMG this stuff DOES have one of the most incredible pouch aromas I've ever experienced. I agree it's not an aromatic kind of aroma. It's what I would term 'volitile'...like alcohol, or magic rum jet fuel honey, or whatever. The initial reviewer's comments in this regard are perceptive and right on. And, oh yeah, again I agree, it's not just RUM in there. Somebody concocted something amazing! It's like rum...and then someone added something quite wonderful and likely fairly illegal...so this is gonna be fun! More soon! (Pending survival.)

Edit 1) So, right off the bat I apologize to the purists out there for not smoking at least two pounds of this prior to doing a review. That would be the "I laughed, I cried, it bacame a part of me!" kind of review. Mine is the, 'I cried cause I only had an ounce' kinda thing. Smoking this vs. Dark Plug, back to back was interesting. This one does seem to be lesser, in terms of both Vit. N and in how 'dark' the flavors develop as the bowl is smoked down, if that makes any sense. What I'll also call the "Rum Liquour" essence DOES last all the way through the bowl and to me, is quite a wonderful experience. It's not subtle, it's THERE! So I'm thinking that this is far more than a top dressing...must be something integral to the aging/curing process itself. (Even the Sweet flavoring in Gawith's Twists are quite a bit more subdued.) Not only would this be a nice change of pace if your usual smoke was the straight plug or flake version...with the level of quality that is a hallmark of Gawith...with the stunningly potent dark flavors present...with the added Rum Liquour essence that remarkably lasts throuoghouyt the bowl...this is classic and easily stands on its own as a Gawith star player!

Now...if it were only available here in the Colonies...then we really would have something!

Woo-hoo! Another head-banger from Gawith and Hogwarts!

Having enjoyed Dark Flake I decided that I had to try the plug, but when I saw that this rum infused version was available I couldn't resist giving it a go.

The first point to make is that if (like me) you expect a 'rum' topping similar to Rum Flake from the same stable, then you are going to be surprised! The aroma coming from the pouch is strong enough that I can smell it across the room.

This isn't like any rum I ever tasted. I can believe that rum is part of the flavour and the overall impression is definitely one of strong booze, but to me the smell is reminiscent of those chocolates with the goopy, fruit liquer filling that are always left over at the end of the box. That isn't entirely fair, as the aroma of Dark Plug Rum is more like a pleasant version of that smell, but there is definitely a resemblance.

On to the smoking. If you have smoked Dark Flake you know what to expect: good quality tobacco, lots of fire-cured flavour and a skin-full of vitamin N. It could just be me, but I don't think that this plug is quite as strong as its flake cut cousin, although there is no logical reason why that should be as the tobaccos are supposed to be identical. Possibly it is a result of the variations in cut and preparation, or perhaps storage and age, but if I had to point the finger I would go with that unusual casing.

That is the thing about this blend. The powerful, rum/liquer/wtf casing is equally assertive under the application of fire, and I am simply not certain that it actually works with the strong, fire-cured profile of the base tobaccos. It is like having a scoop of strawberry ice-cream on your roast beef.

Perhaps my opinion will change, but at the moment I can only get into this blend once I have rubbed out some slices and given them a chance to air for an hour or so. Although it is perfectly possible to smoke this blend quite damp due to the bite-free nature of fire-cured leaf, the drying time reduces the presence of the casing to a manageable level.

I am certainly not going to let it put me off trying the unscented and uncased version Dark Plug, but because of my reservations about the casing Dark Plug Rum gets 3 stars rather than the 4 I really hoped that I would be able to give it! Recommended.

EDIT: I have started to come around to the way that the rum flavour works with the tobacco, to the degree that I have found myself with the odd craving for what was originally a slightly strange combo. It still doesn't earn that extra star, but I can see myself buying this again sometime.

Another great plug from Gawith Hogarth. Cuts easy,packs easy,Lits well,few relight a needed. Cool smoke, leaving some moisture in the bowl. Bold and full taste. Not an all day smoke. Highly recommend at least to try.

I love the flavours here; dark and toasty, rich and sweet, sharp and alcoholic. Dark Plug Rum has the lot.

I agree with PipesterJim that the (heavy) casing can seem slightly unusual at first but I really like it. Although the casing tastes almost exactly the same as the one used on Rum Flake, to me at least. I think it may be the taste of the actual tobaccos and the degree to which the flavouring is applied which creates the difference in the relative smoking experiences. If it wasn't for the fact that it makes the inside of my mouth feel (for want of a better description) "fluffy" and somewhat numb, I would buy this all the time. It's an odd sensation and one that I have never experienced with any other tobacco. Is this what I have heard others refer to as cotton mouth I wonder? Has anyone else experienced this?

Clearly this doesn't happen to everyone so I have no qualms in recommending the tobacco for it's many solid and sterling qualities. The mouth sensation is just unpleasant enough to stop me from buying it anytime soon but I might revisit it in the future and I think anyone who likes to experiment with the strong and unusual should give this a go.

This is one of those nostalgic and wonderful tobaccos, it is simply wonderful! Full of flavour and good delivery of nicotine, I like this in the morning with a cup of coffee, in fact I like this all the time!