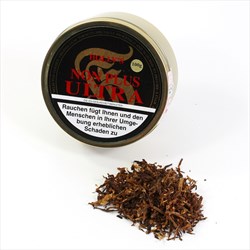 A mixture of selected golden Virginia leaf tobacco processed to provide a cool and mild smoke. This is not a cased blend.

The Virginias are fairly earthy and grassy with some wood, a bit of citrus and a little ripe dark fruit with a slight fermentation. It’s impossible to identify the toppings, but I get some anise, a little tonquin, a Lakeland-type essence of some kind, some sourness, and a heavy floralness ( I think geranium is one of them). The blend is very perfumy and soapy with an incense quality about it. The smell of the toppings out of the tin is very strong - more so than it is in the taste - though they certainly sublimate the Virginias to a fair extent. The fact that they don’t totally drown them out is testimony to the strength of the tobaccos. The nic-hit is medium. The strength is medium to strong while the taste is full. I encountered no bite, but there is a mild roughness among the savory sweetness throughout the experience. Burns a little slow as broken flake tobaccos will, with a very consistent flavor all the way through. Leaves a bit of moisture in the bowl, and needs some relights. Has a sweet and sour, bitter, rather filmy after taste that lingers longer than you may prefer. Has a very sweet room note. It’s not an all day smoke by any means, but fans of 1792 and products of that stripe may find it suitable.

The memory of this tobacco haunts me to this day. I have severed all ties with the person who insisted I try it, and destroyed the pipe it was smoked in.

Things I would rather smoke than this blend: -C4 -Donald Trump's hairpiece -The powdered brains of my own children

The only worse-tasting tobacco I've ever encountered was when a friend of mine took some chopped up pieces of a tree, put them in a bag, and gave them to me as a joke.

This was so bad I thought it had spoiled (I'm not even sure if tobacco can spoil in the same way milk does, but if it can here is the proof). It was so bad I went online and ordered another tin from a different retailer; and guess what? Spoiled milk again. The only positive thing I can say about Non Plus is it is consistently nasty, fowl and vomit like in flavor. I am a big fan of Dan Tobacco's products and was horrified that this product bore their name. Please, no really please, try one of their other excellent blends and skip this one.

Based on so many bad reviews I was curious to taste this much maligned blend, so when I found a tin on the clearance rack I had to try it. Yes, it really is that bad; it is very likely the second worst tobacco I have ever tasted, after Apple.

I tasted an overwhelming grandma's perfume flavor that was truly awful to behold. I didn't believe it could be this bad but it is. The tongue bite was almost instant, perhaps the CIA could use this for interrogation purposes, but other than that it has no uses I can imagine.

I remember it like it was yesterday. I had just turned 11. It was winter in the old country and my friends Nikolai, Vladimir, Stanislav and I were all armed with snowballs. We were looking for trouble and adventure and we found it soon enough!

“Let’s go to Baba Yaga’s house and throw our snowballs at her”, I suggested.

Her house was a little more than half a kilometer away from us and as we approached, we heard a scream “Fire”!

We bounded into the house, laden with our snowballs, and stopped at the open door of the smoke-filled room. Something was burning alright; perhaps Baba Yaga had been careless with her pipe again. It wasn't the first time. There was no fire to be seen, only clouds of smoke and Baba Yaga smacking at the smoke with an old broom.

“Do something.” She barked.

And we threw all our snowballs into the smoke—I think we missed Baba Yaga and ran out of the house to the telephone box.

“And Alexander Rozhenko, he likes fires.”

But we only called the fire brigade, and soon the fire engine came and three tall men in helmets brought a hose into the house. Baba Yaga got out just in time before they turned it on.

Did her smoldering carpet remind me of Holly’s Non Plus Ultra tobacco? No! It was the smell of one of the firemen who obviously forgot to put on his deodorant. The memory haunts me to this very day.

I recently smoked this tobacco and my advice is: Don’t try it!

Based on a small sample I was sent: I can see why some people might dislike this. If you haven't tried a GH-style Lakeland or a few of the SG-Lakelands (or if you don't care for either type), this would be quite startling. The tobaccos are v much overshadowed by the toppings, which remind me of various of the Gawith Hoggarth Lakelands, as mentioned above. So take the VAs in those down a notch, and increase the 'floral-ness' up a notch, and add a touch of incense (although nothing like the intensity of Sam Gawith's RB Plug), and that pretty much sums up my reaction to this sample.

The cut makes this burn a tad on the fast side, but not unusually so; no real bite. As I like most of the GH floral Lakelands (e.g Grasmere, etc.), I enjoyed this. If it were readily available, I'd certain buy a tin to see if I liked it enough to add to my usual blends. If you dislike such blends, stay far away; if you haven't tried one, this isn't the one to start off with!

Pipe Used: meer and a yello-bole

The work of a madman. Mind bogglingly awful. I can't get over it. This stuff tastes like fabric softener. Ruined my pipe. This is like that black soap you buy at the joke shop. Well..the joke's on me. Smells great in the tin, though. Might work well as potpourri for the bathroom. Your wives will love it!

Virginia leaf that's a little sooty in flavor. Not really top-shelf IMO, but does have an interesting added casing that I can't put my finger on. Not fruity or alcohol based. The leaf burns clean but this blend leaves a bit of an after taste that I personally wasn't too fond of.

I join all the previous reviewers as this stuff is awful!

Imagine you have a full milk churn and you forget it in the stall. One week later you find it and blunderingly a piece of soap slips out of your hand and falls right into the milk churn. Now give this delicious mixture one more hot summer week and you have the sauce for this tobacco!

Holly's huh? I think I would rather have eaten a holly bush the way this stuff tasted and torched my tongue. While I dont favor aromatics as a rule, I never really understood why some were so ardently against them. After smoking the Spanish Inquisition in tobacco form, I know why many avoid them.

The most insulting-on-the-taste-buds tobacco I have tasted in my 30 years of pipe smoking. If you must try this stuff, for goodness sake use a corncob instead of a briar. The flavorings in this "tobacco" will stay with your pipe for eternity!

November-2003.Holly's Non Plus Ultra. I could certainly taste the virginia along with something resembling perfume perhap's? It light's & burn's easily. But after a few hours my tongue feel's very tender,this is a 'sneaky' tobacco indeed,as I had no warning of this while smoking. I'm not prone to being bitten by tobacco either,so watch out!

The lowest circle of piper's hell: This stuff tastes like perfume smells.

I wouldn't go as far as the claim in the name, but this still is an enjoyable smoke. Yellow and brown VAs result in a tin aroma that is initially very strong and reminds me of the Orlick VAs. However,I believe there is no casing. The tobacco has been partially rubbed out and results in an even packing with a unifrom burn rate. The flavor is consistent throughout the smoke and not influenced by varying bowl sizes. If you enjoy straight VAs, you might like this one. A slightly wetter smoke towards the bottom of the bowl than I prefer, but still tolerable.