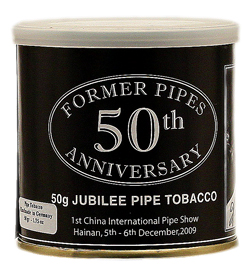 A classic English Virginia mixture with a fairly high amount of Syrian Latakia. This blend is full bodied and spicy, yet soft and mellow with the typical natural Virginia sweetness.

Not listed as a DTM product on their website, though they do manufacture and package this blend.

I was gifted a tin of Former's 50th Anniversary blend a couple of years ago by one of my Chinese customers who purchases tobacco from my website. I had wanted to try it due to what I was told was exceptional Syrian Latakia that smacked the palate in heavy waves. Boy, was my friend right! I noticed right away the softer, sweeter presentation of the Latakia as opposed to the Cyprian variety, and really enjoyed the way the Virginia played in the background just enough to lend support.

I saw a couple of tins of Former Nielsen's 50th Anniversary ("Jubilee") blend (FJB) at my tobacconist's, and curiosity got the best of me. FYI, my tin is now over 4 years old. Appearance in the tin is long-ish and short light and dark ribbons and bits, well mixed. The tin note opened with apricots over aged VAs, also old belting leather, with minimal "smoke" scent and Asian spices. The uber-scent soon shifted from apricots to turned apple wine. Later, that also faded back to kind of a "fragrant" barnyard glop, overall. Tin moisture was perfect, and it's no trouble to load and light this blend. It burns quickly and then stops with some char still on the bottom of the chamber. The taste is mostly aged VAs, with some faintly smoky/incense notes from the Syrian Latakia, and there is also some cardamom and nutmeg in the air and on the tongue. Straight from the tin, FJB reminds me most of another little-known, "special" blend, McClelland's GKCPC 1776, except the McC doesn't burn well at all, and FJB features less in the way of non-tobacco additives than GKCPC 1776 does. Both blends raised the same question in my mind: Hunh? Strength is mild to medium, and flavor is medium. Aftertaste is first ashen and sour (suggesting Orientals), then ashen VA, then (finally...) a long, fading memory of fine, aged VAs, with some residual sugar.

It took me some time to decide how to rate FJB. While there is nothing all that wrong with it, neither is there anything special about it, apart from the tail end of the aftertaste. I second-guessed that its reason for being was to have something eye-catching for sale to visitors to the China pipe show in 2009. Whatever, I guess it's a 2-star blend to me, barely escaping a 1-star rating, which means in my case that I just don't get it, therefore can't recommend it.

Age When Smoked: over 4 years

If you are going to produce a one of a kind special blend, there should be something special to remember. Jubilee is easily forgotten. Is it a bad tobacco? No. The tin smell is great and I can smell a very light sweet topping. The blend is somewhat bright with lots of Virginia ribbons. The addition of Syrian makes a nice combo with the Virginias. I think that this will age well, but I may not be willing to fork over the cash to find out.

Very fine english with a twist. It says that it have syrian latakia but i dont believe its the case any more. Either way the latakia is not dominant and you can taste the virginia just fine. This has a sweet topping to it which complement the blend beautifully. Not inflicted on room note though, just the taste. Burns fast but cool and very mellow to a white ash. Reminds me of pembroke but the cut is slightly bigger/wider. I have to knock one star for availability.

The Syrian Latakia offers a deep leathery aroma and flavor throughout the smoke with a hint of cedar smoke. However, its merits are ruined by the bright Virginias that are mostly crisp, grassy, while also being harsh and nippy. While not unsmokable, I know that every bowl will in some way destroy my tongue and my soul.

Summary: for those who like light Englishes like "Presbyterian," this sweet Virginia-Latakia blend offers an option with a light aromatic topping.

On first light, a puff of the Syrian Latakia rises to the top of the flavor profile, a sweeter and more leathery version of Latakia compared to the campfire and gunpowder sensations from the Cyprian version. This nearly vanishes in a wave of gentle brown Virginia sweetness of a fine thin flavor like Agave, possibly with some Cavendish or Maryland leaf involved, and topped with a mixture of fruits and spices. The topping essentially melts away by the end of the first quarter of the bowl, leaving a Virginia blend lightly flavored with sweet Latakia, sort of like "Presbyterian." This would be more enjoyable without the topping and maybe some Burley to spread out the flavor, but it shows the possibilities of light Latakia blends.