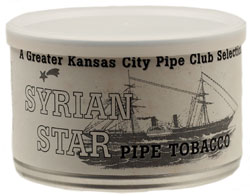 Rare Syrian at its finest, rich Virginias at their flavor peak, the finest fragrant Basma. This extraordinary leaf is aged in cakes, then spun into ribbon for a blend that truly shines.

Notes: Originally introduced in February, 1997 for the Greater Kansas City Pipe Club, is now part of the Club Blends Series.

Syrian Star is an excellent blend with just the right balance of Syrian and Virginias. This is slightly sweeter than "Three oaks Syrian" and a little lighter ( middle of the day blend). I find it very smooth and smoother than Three Oaks Syrian.

Now let's bring in "Orient 996" for another comparison ,with its Syrian and a touch of Yenidje. 996 I find even more flavorful, just as smooth and just as sweet as Syrian Star. These two are closer matches than with "Three Oaks Syrian" that just isn't as sweet.

My personal preference would be Orient 996, then Syrian Star, then Three Oaks Syrian in that order. I also find that all three are best smoked from a corn cob rather than a brier , as the smoke is sweeter and more flavorful.

Although this is the McClelland's Greater Kansas City Pipe Club blend, my review is of the original 1996 Syrian Star that may be; well, actually is, one of the finest English blends I've ever had the pleasure to smoke. Deeply rich, pungent, naturally sweet Syrian leaf is combined with the other elements to produce a very rewarding and relaxing smoke. And speaking of smoke, this blend released huge, thick volumes of it with each puff. The Virginia compliments the Latakia by providing an unparalleled depth. If you ever see one of these tins available, grab it!

Despite the name, Virginias play the central role here. The latakia is there but, as the label description admits, it's there as a condiment.

It's a red-VA heavy, light latakia/Oriental blend and a nice smoke. Imagine McClelland's Legends with the lat/Orientals turned way, way down, bringing the VAs to the front. The room note might be more pleasant to the average passerby than more lat-heavy blends. It's enjoyable but won't knock off any of my current favorites.

Like most of this blender's offerings, you can't go wrong with it. It's solid enough to take a flyer on, especially if you are a fan of McClelland's Virginias. It's mellow enough to work as an all-day smoke. Also, if the barbeque-sauce aroma of McClelland's red VAs puts you off, it's not as strong with this one (at least the tin I have, which I believe is a 2013 vintage).

As with most McClelland's blends (all of them that I've tried), you can give it plenty of dry time before lighting up if you want to.

7/26/2014 - This one seems to be aging REALLY well, judging by the tin note. Might be adding another star to it at some point.

1/11/2015 - Finally getting my head around McClelland's Virginias, thanks to Rich Virginia Ribbon, and now suddenly "get" this one. Very similar (or the same?) VA base with some beautiful latakia added. For the first half of the bowl, it's like someone's throwing fat, juicy navel oranges onto a camp fire. In the last third, it turns into very mellow camp fire and whiffs of grilled meats. The room note is beautiful. This is not a heavyweight English like MacBaren's Vintage Syrian or Hearth & Home Magnum Opus. But it's beautiful in its own adventurous, cocksure way. Adding a fourth star.

Similar Blends: McClelland Rich Virginia Ribbon w/o the Latakia. In fact, a 1:1 mixture of RVR and Syrian Star is an interesting way to punch the former up just a tiny bit (or soften up the latter).

This is a lovely smoke. Dark, smoky, with hints of carmelized sugar. Deep and elegant flavor, invitingly complex. Good smoke volume obtained easily. Flavor deepens and strengthens as one moves down the bowl.

To my taste, this is a four-star tobacco.

A bit less black in color than the Cyprian version and the cut is a little more solid as well... not as many tiny pieces at the bottom of the tin. Tin nose was of Syrian latakia with that same coffee-like aroma from its Cyprian sister.

Again, this started off as Syrian latakia, quickly moved into sweet Oriental territory and then firmly settled into that Royal Cajun-type coffee flavor that I get from stoved Virginia mixed with the RC processing (whatever it be). Ultimately, the Syrian is the same minor player here that the Cyprian is in the other, but it's a crucial player. This gets complex at times but is mainly kind of a simple tasting stoved Virginia blend. As a fairly new fan of Syrian latakia, this is not the one I'd recommend to those jumping into those waters. For that I'd go with McClellands Syrian Full and Syrian Super Balkans. This would be for those that want to dip their toes into Syrian. And IMHO, McClellands has the finest stash of Syrian latakia on the planet, as well as the finest batch of Virginias. 3.5 star blend that doesn't threaten a 4th star. Very good, but I'm sticking with the other two mentioned blends for a preferred Syrian hit.

This review is for the GKCPC version of Syrian Star, and not for the earlier PCCA production. After smoking both back to back a few times, I detect absolutely no differences between the two. Therefore, this review is mostly the same as the one I wrote for the PCCA manufacture with added notations. The matured orange, red and less noticeable lemon (which is not mentioned on the tin) Virginias provide a wealth of tangy dark fruit, earth, wood, bread, some sugar, tart and tangy citrus, very mild floralness, vegetation, tart lemon, and a few spice and vinegar notes. They are the lead components. The smoky, woody, earthy, wine-like, leathery, sweet Syrian Latakia is a supporting player. Unlike the PCCA tin, the presence of Basma is listed on the label, and produces a fair amount of earth, wood, some herbs, spice, vegetation, floralness, some buttery sweetness, dry sourness, and spice. It’s a step or two behind the Latakia most of the time, but every so often it seems to be a tad more obvious.The strength and nic-hit are a step short of medium. The taste is medium. There’s no chance of bite or harshness. Has a few minute rough edges. Well balanced, deeply rich with some complexity, it burns cool and clean at a slightly slow pace with a sweet, fruity, floral, spicy, mild campfire flavor that extends to the pleasantly lingering after taste. The room note is a notch stronger. Leaves little dampness in the bowl, and requires a couple more than an average number of relights. Can be an all day smoke. Four stars.

I'm a relatively new pipe smoker (been smoking cigars for years though). I definitely am becoming a bonafide lat-lover & this blend satisfies my sweet tooth for the stuff. It's got that signature McClelland ketchup aroma upon opening the tin (which I personally like) and its easy to pack & light with minimal dry time. It's pretty mild to me with sweet, smokey flavors, a nice matured Virginia base and just enough Oriental leaf to tie it all together nicely. The retrohale is very enticing as well - I can almost taste the fragrant woods & spices that were used in the curing of the high quality Syrian Latakia in this blend. Highly recommended.

How surprising to see so few reviews of this delightful blend. So....let me add my two cents: A sublime tobacco! Truly, the Virginias are front and center in this blend, and they add a divine sweetness to the smoke. The Latakia adds an excellent dimension, but is mostly there in the background. I must say, I can barely detect any orientals, but they seem to add to the overall flavor and wonderful room note. The combination works very well for me, as you can savor the sweetness and quality of McClelland’s wonderful Virginias, and on occasion taste the Syrian in the background. Obviously not a lat bomb, but a wonderful way to compliment the Virginias. Seems less like a traditional English, than a Virginia with wonderful condiments. My blend was only two years old, and I’ll be keeping my eye out for more tins, which crop up online every now and then. A pity it is no longer made. I have been treasuring each bowlful.