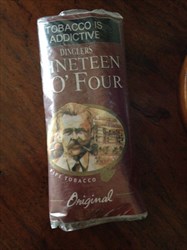 Notes: Only old stock is available in South Africa

Not the greatest smoke i've ever had, but good enough for all day puffing.

In South Africa this is available in a 50g pouch.

I have used this to stretch several other tobaccos because it tastes very neutral. It will, however water down the tobacco you are stretching.

It also supplies a rather hefty nicotine kick, so be advised, smoke carefully.

Purchased From: Local Brick and mortar.

If you like your Burley robust and memorable this hard to find mass produced, OTC from the Republic of South Africa would be the ticket. As previous reviewer "Skando" accurately attests there must be some exotic "masculine Burley" in Leonard Dingler 1904 Original Blend, as there certainly is with 2 other Dingler mixtures I've tried - the Cherry and Vanilla blends. This 1904 batch was bought in a distinctive red, black and white, 50 gram (1.65 ounce) foldup pouch. Always pictured on these pouches is a chap, perhaps a likeness of mustached tobbaconist Leonard Dingler himself, clenching a straight briar, puffing away. This dapper, colonial era and well appointed personage stands in front of a shelf adorned with pipes and a sign reading "L. Dingler's Tobacco Factory."

Love my U.S. American Southland Burley, but this African leaf has a captivating, eclectic flavour, something hard to describe and very impressionable. This tobac will grow on you - a little bitey and raw at first - but after several bowlfuls a bonding process kicks in. Maybe a really high nicotine content is at work here? I discovered these 1904 blends in travels to Southeast Asia (e.g., the Philippines, Indonesia and Hong Kong) where the Scandinavian Tobacco Group and Swedish Match - who acquired Dingler in 1999 - aggressively market some of their other marquee brands including Pinkerton's Half & Half and Granger and the entire Borkum Riff lineup. Happy hunting!

There is a slight sweet taste but only once out of the 43 times that it will take to keep a bowl lit. And that is after drying for more than a month.

Will definitely not be buying this again, it's just not worth the effort.

On opening then 50g pouch I was greeted by a pleasant smell that took me back to the liqourice sweets I ate as a child. The tobacco self has a dark brown colour and was extremely damp. After about two weeks of drying it was just right.

On first light you get a sweet note that hints to a sort of minty flavour. Other than that, it's hard to detect any flavouring but there is something there.

This tobacco is good for an all day smoke but you get the sense that you might grow tired of it after a while. Still, I would highly recommend it. Overall, a very pleasant smoke. Well done.

A very beautiful and practical tin, containing 20gr of tobacco, was given to me by “nektarios” as a gift. Burley and Kentucky are its components. Once you open the container you realize that there is no protective paper wrap nor a bag, but the tobacco contacts directly the tin and just has a piece of paper on it. Nothing else. It is a strong tobacco, and you tell that from the first puff. It is not particularly moist, it easily fills the bowl and if you are not very very careless, it will not bite your tongue. The taste is very earthy and simple; it gives the impression that it encloses several nuts. The room note is neutral.

Small rectangular tin of the kind used for flakes, containing 20grms of tobacco.

Brown label for the "Original", violet for the "Rum & Raisin" version.

Opening the tin: the tobacco has not any inner packing, just a printed cardboard lid.

The weed is mostly medium brown, with darker & lighter minor parts. The cut is medium ribbon. Regarding the humidity, oh! it was bit wet at the opening, after one month it's just OK... still very soft, pliable and springy. The components seem good quality and I have not found any stick.

The blends share absolutely the same base. I guess we are talking of some masculine African Burleys with something else (a touch of Virginia, and some fired leaf). The tin smells some chocolate for the original (after one month it's almost gone); some alcoholic topping has been used for the "R&R" instead (still there).

They light and stay lit easily. They don't burn hot, nor bite. Care must be given to not rush the smoke to avoid some gurgles, plus the smoke turns unpleasantly bitter.

The smoke: mainly earthy, a bit musty, some sweet notes of fruits in the far distance, some salt as well. Vitamin N in fair quantity, my stomach says...

I'm smoking both back to back, not great things are happening, or ... I'm simply unable to trace much more. These things are so "regular", I would say of the same league of the so-called Continentals but without the subtle variations of the latters. The flavouring/casing is very ethereal, one will never say he's smoking some aros.

For the moment being, my main staple in the Burley dept. is Burley London Blend by McBaren, which is far more flavourful (and sweet). Nevertheless I cannot say these two Dingler's are something to steer clear from.

One doesn't get this in South Africa anymore. But I found a bag sitting in the humidifier on the liquor store counter. So I bought it and when I got home found it a bit dried out. A jar with orange peels restored the tobacco over night.

Not the best smoke and not the worst. Plain simple pipe tobacco, earthy. For R 40-00 ($ 3-00) who can complain? Nice nicotine kick too. Be cautious of young burn. I found this similar to African blends.

I am sure this would be an okay smoke for light puffing through the day.

This tobacco is one of the best tobbacos but am disappointed by the finger for discontinuing this brand I used to buy it @shopryt,checkers and tobacco Shop buy now I don't get

Purchased From: Tobacco shops in the East rand