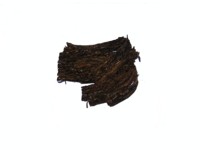 Creamy caramel and ripe cherries. A distinctive aromatic aroma to the medium strength tobacco base.

I was quivering with anticipation when I opened the packet, the waft of a very creamy cherry - which was, admittedly, more of cream than cherry - graced itself upon my nostrils led me to hope this might be a rather good smoke. Sadly, upon the first draw from my pipe, I was a tad disappointed as the cream came through okay but the cherry seemed to be on a toilet break - and it didn't bother to flush. And nowhere, during the whole packet, did it bother to return. A pleasant enough smoke, and maybe if they'd left the cherry off the name I might have enjoyed it a little more. I'm not put off smoking it again but in no hurry either. I would just like to get the flavour I paid for.

Typical GW's flake, moist and meaty with a delicious scent.

I'm agreeing with The Full English, this doesn't taste of cherry and I'm not convinced it smells of cherry either. Did someone mention caramel ? Not that either.

It is however a nice creamy flake and certainly sweet, but not sickly. Certainly not as chemically repellant as poor old Celtic Talisman.

Whatever it is, it's quite alluring and not a million miles from the brilliant Firedance flake.

It's not a bad flake, but have a suspicion it might get sickening if smoked too often. Shall find out...

Dear me. There's something inherently foul at play when an aromatic (and supposedly a simply flavoured one) tastes absolutely nothing like its description. No cherry; no cream; nor the remotest hint of caramel. Just a massive hit of that much maligned Lakeland flora. I'd have even taken cheap cherryade flavouring over this for the sake of saying Gawith & Hoggarth actually made an effort. Indeed, my experience with this flake was so left-field that I found myself inspecting every other pouch from my tobacco sampler for fear that the tobacconist had mislabelled them.

This is not to say that Kendal Cherry Cream is a bad flake. By all accounts, the tobacco itself is typical of the Kendals: marvellous quality; cool and voluptuous, and all all round brilliant smoker. Puff hard enough and there is some underlying sweetness - but it's not cherry. I tried to get a handle on the flavour, and in smoking too fast, managed to deliver a shot of something extremely bitter and the bowl turned on me thus from thereon in. A new flake and a second bowl the following day revealed a much more well behaved character, with less floral essence and a shade more sweetness, but the bitter ghost always threatened in the final third.

In a regular situation, I'd be inclined to give this the thumbs up after wrestling with it for a couple of days - a possible two, even three stars at a push for the benefit of the flake itself. However, it's such a crime against trade descriptions that it's called "Cherry Cream," that it infuriatingly relegates itself. If the folks at Gawith & Hoggarth cared to re-brand it, giving it a much more deserving moniker and a truly faithful description, then there would be a lot of happier punters - myself included.

Try it and enjoy it - but not on the basis of a cherry aromatic.

A very nice VA blend that has that Lakeland flavor in a fairly small dose. Instead of full on cherries or cherry candy what I get is much more cherry blossom. The cream is kind of subjective. It is sweet and I can see hints of caramel that round out the flavor nicely. I find I like it better in wide shallow bowl like a pot. All in all an enjoyable experience.