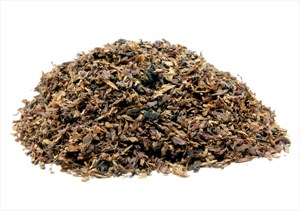 The Match is slightly less grassy than the original with the same amount of Virginia citrus. The Oriental/Turkish acts in a supporting role with a light spice, dry note, while the Cyprian latakia has the usual smokey, woodsy character you'd expect it to, and it is more notable than the Turkish. The proportions seem to match the original, though the latter has slightly more latakia. The nic-hit is just past the mild level. The original has a tendency to nip the tongue if puffed fast. This one won’t do that. No harshness or dull moments exist here. A well balanced blend that burns cool and clean at a moderate pace with a consistent flavor. Leaves almost no moisture in the bowl, and needs few relights. Has a pleasant, short lived after taste. Can be an all day smoke. It’s a very close match, and in a blind taste test, it would be difficult to tell the difference. I gave three stars to the original.

It's been years since I smoked the original so I won't attempt to draw any comparison and will rate this on it's own merits/downfalls.

Match Standard's quite a well rubbed ribbon without the inclusion of any twigs or coarse pieces and has a higher quantity of medium browns compared to the number of black and yellow pieces. On arrival it was too dry.

Because of the hydration being low it's a doddle to light, but burns a bit fast if puffed with vigour. The flavour profile has much more Latakia and Orientals in comparison to the Virginia. The Virginia adds a sweet touch to the smoky flavour, without bringing hay and citrus sharpness. I don't get any tongue bite from Match D.S.M.M. but due to the dryness the smoke can seem warm.

I like the flavour from this but the moisture lets it down. But, because none of my fellow reviewers to date have complained about moisture I'll accept this as a one off. For the flavour it earns a recommendation:

I was pleasantly surprised at how good this match blend is. Tasted dead on the original to me and burned very well down to the bottom of the bowl. And at a much better price! Great job Sutliff!

Age When Smoked: fresh from the shop

This is another of Altadis' clones of Dunhill blends for which I've never tried the original so can only judge this Standard Mix based on what it is, which is a fair way of judging any tobacco I think. It's quite good, and “Standard” is probably a good name for it. None of the tobaccos in the mix dominate over the others but all seem to be there equally in flavor. The Virginias to become sweeter as the bowl is smoked. This seems to be common with Virginias. I've read it's because the heat artificially ages the tobacco and brings out the sugars in the Virginias.

“Standard” is, I think, a good name for this blend precisely because it does his an even point where the tobaccos' presence are felt equally. A 'nulling the meter' of sorts – (-)_l_(+) – a balancing act that, no doubt, requires more than simply adding equal weights of each tobacco (I think if that were done the latakia's presence would overwhelm the others).

The pouch reached me at just the right moisture level. It lights easily and stays lit. All the physical characteristics are good. And the tobaccos used are of good quality. Being “standard” however, it really doesn't jump out as being particularly distinctive in any facet. For that reason I don't know if I'll get any more but at the same time I wouldn't complain if I could only get this and a couple of more English blends. I like all kinds of smoking tobacco and enjoy experiencing a variety of blends and was glad to have the opportunity to sample this.