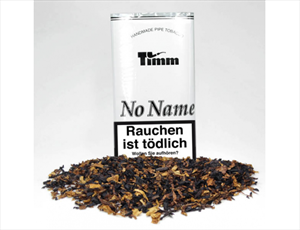 Notes: The absolute #1 in this series. This mixture tastes exactly as it smells: comfortably gentle, with the aromas of Mexican honey and bourbon vanilla. Recommended for bowls of all sizes.

As usual only available online from Germany, now everybody country in Europe scorns the tobacco trade. So, you won't - surprise, surprise - find this in British tobacconists.

It is such a reasonable price (even when you take shipping into account) that you might suspect this is some kind of cheap crap, but it isn't.

If anything it reminds me of the Laarsens range of excellent tobaccos.

It looks rather dark in the pouch and rewards a decant into a jar with a sumptious nosegay of vanilla and bourbon, and yes, a shade of sweetness is present with the honey.

It is a little moist at first (hence the decant) but packs easily (with a little rubbing) and burns evenly with minimal relights. It's quite a dark looking tobacco, with a lot of black threads.

The aroma does come through in the taste and doesn't really disappear until the dregs.

A really fine smoke, that, if you like aromatics won't disappoint. I found myself picking this up time and again for refills and it hasn't got sickening, likesay, Captain Black or Sunday Fantasy.

Well worth picking up if you are lucky enough to be on the continent and super value (for now) online.

Pipe Used: All of them (briars)