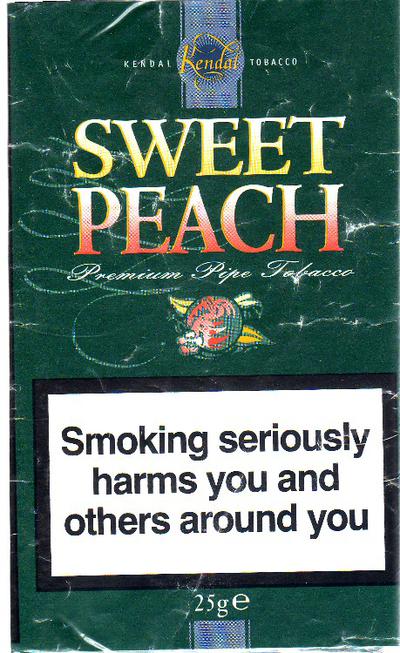 A combination of mature sweet Virginias, Burley and Cavendish tobaccos form the basis for this sweet mixture. An easy burning tobacco with a fresh peach flavour.

Ever since i started pipe smoking i have dabbled with and enjoyed various aromatic tobaccos, even smoking them exclusively for a while until i developed a palate for vapers. Even still i come back to them from time to time and just before xmas i found a shop locally that sells sweet peach and reading the reviews here i thought what the hell. Opening the pack today i was expecting really strong aromas not so, the peach isis subtle slightly sweet and it actually smells of real peach. The tobacco itself is almost a shag cut of various tones of brown and the blafk cavendish it is moist so i let it sit for half an hour. Loading is easy and it takes flame like a charm. The flavours again are subtle i was expecting flavour over load but the peach flavour comes through beautifully along with nice tobacco flavours and it stays flavourful down to the last draw. This is no where near as strong flavoured as the kendal cherry and vanilla but for me the flavour levels are perfect. Its a beautiful smoke and a real taste of summer. I would highly highly recommend this mix it has enough flavour there to keep die hard aro fans happy and not too much that it will make the aro novice feel overwhelmed. Also the room note is really pleasant it smells kind of like your grans kitchen qould when shes preparing fruit for jam making and doesnt descend into a horrible smokey mess. Gawith and hoggarth have done it again they have delivered a top qaulity tobacco which keeps me and my wallet happy.

Lovely smell, and burns smooth and cool. Not too much tonguebite, and stays lit surprisingly well for an aromatic. A nice flavour with just a subtle hint of peachy sweetness. Recommended.

beautifully cased light mixture with the sweetness of the cavendish and tanginess of virginia constantly pronounced. the casing is very sweet and fruity in nature but not overwhelming. the blend packs well and behave good if not mistreated. the moisture level was just about right although it might need some air for a while. burns well and even will light nic content which makes it a suitable all day smoke if you have a sweet tooth. the room note is acceptable by many.

Ahh, my first pipe tobacco! Not sure if it was my inexperience but I found this a bit too moist and hard to keep lit. The smell is wonderful however, although it does become bitter and flat towards the end of the bowl as if it just runs out of steam.

A great introduction to pipe tobacco, I would heartily recommend for a beginner. Despite my love of English blends and SG's Best Brown Flake, I would still entertain a bowl of this just for the aroma.

This is a nice tobacco This would make an ideal beginners pipe tobacco. Nice sweet taste and a good cool smoke.

Well now, ive smoked a pipe about a year now on and off and just recently bought a Civic Church Warden from Greens Of Leeds a Highly Reccomended Purveyor.

I received this Tobacco as a gift from a friend and if im honest I would not have bought this myself not being a particular fan of peach. What a fool I was! This is a quality blend of which I have come to expect from Gawaith.

Strength I found this extremely mild even as it began to Dry.

Flavouring Unlike some flavoured tobacco I didnt find the Casing one ostentatious or overly brash! no quite the opposite it held very nicely right to the end of the bowl. It remained as a nice afterthought with each pull and tingled the tastebuds.

Room Note Well this is a very soft blend where the room note was concerned. Much like the Flavour it wasnt to opressive. much the parralell as it was a very pleasent and relaxing aroma. For my part I found it a very christmasy smell and not at all to sickly like some fruit based Toppings.

Taste I have a limited Sympathy with Fruity Tobacco. I tend to find them very sickly but this one was mild right to the end of the bowl. It was a wonderfully playful taste and again was very festive.

Recommendation For Casual and begginer smokers this is a MUST HAVE! however for the Veteran smoker you may find yourself wanting a little more from this one. Its a very christmasy smoke but also would work great for sitting out on the porch in the hight of summer.

A word of warning, this is a VERY moist cut and is extremely awkward to light.

As far as fruit-cased tobaccos go, this one is very satisfactory. The peach flavour comes through in fragrance and taste alike. A very moist tobacco, but after a little drying out this proves to be a very good smoke and I would reccomend it highly.

I wanted to rate this tobacco higher because I quite like it really.

The base tobacco is straightforward good quality and the added peach fragrance is both pleasant and well balanced. I just feel that it is let down by the cut. It's more of a shag than a ribbon (at least in my understanding of the terms) and this seems to flatten the taste as well as making it a bit more of a faf to deal with. Coarser textured tobaccos tend to carry the tastes across the palette with a bit more conviction and I often find shags a bit more temperamental in terms of how they respond to variations in packing and smoking techniques. This could well be a three or even four star tobacco, given the right cut.

Having said that, G,H&co. do make some excellent shag cut tobacco (Kendal Kentucky is a masterpiece), this just isn't one of them.

i thought i would give this pipe tobacco a try back in the summer 09..and its quite nice...very sweet...and burns nicely...the room note is very nice as well..i have bought a few pouches of this and i have enjoyed them,i would smoke this as a 'makes a change type' of tobacco...a nice pipe tobacco, maybe you could mix your own blend with other kendal pipe tobaccos..namely 'cherry and vanilla'...it was nice sitting in the garden with the old pipe and this kendal tobacco back in the summer.i would buy this again.

This is my first review for a new tobacco I added. I have only been smoking a pipe for a couple of months and have done the traditional reading and test tasting of many tobaccos.

Having been a menthol cigarette smoker for almost 20 years I find myself drawn to the sweeter aromatics. This tobacco is no exception to that rule.

It is sold under the "Kendal Tobacco" label, manufactured by G&H. I live in Spain, but can only get this tobacco in Gibraltar, so it is probably only for the UK market. They also have a few other flavours I hope to review in the future after my next trip to Gib.

In the pouch the tobacco is a fine ribbon cut and quite moist. It lights fairly easily and stays lit throughout the bowl. On lighting, the aroma is very pleasant. To the taste there is a definite peach flavour mixed with a tone of vanilla. It leaves a very pleasant fruity taste in the mouth and behind the teeth both during and after smoking. With my favourite fruits being peach and apricot this tobacco certainly fills that criteria. The tobacco is mild, but the flavouring quite strong. Even though the tobacco is moist in the pouch, it does not burn as hot as many other aromatics I have tried and did not produce any bite whatsoever, even though I smoke quite hard - again unlike many other aromatics!

This has certainly become my favourite smoke. My only regret is that I only bought a 25g pouch to try it and now need to make a journey to stock up!