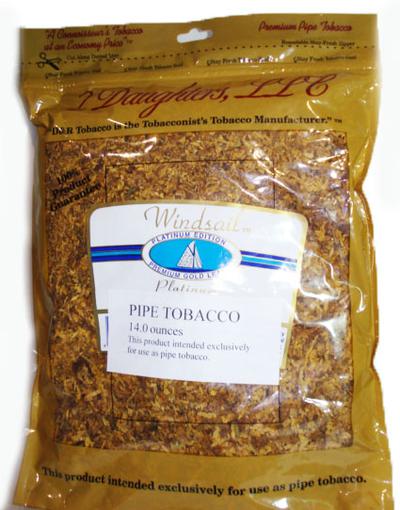 The flue cured Virginias provide a bit of tart and tangy citrus and grass/hay, a little earth, and touches of dark fruit, smoke, wood, honey and spice. The strength and taste levels are a step past mild as is the nic-hit. Won’t bite or get harsh, but does sport a light rough edge. The tobacco is a little dry, but performs well even without hydration, so I suggest a slow smoking cadence. Burns cool, clean and a little fast with a very consistent, mostly one dimensional flavor. Leaves virtually no moisture in the bowl. Requires few relights. Has a lightly lingering, pleasant after taste and room note. An easy going all day work and play smoke that would make a good mixer, too.

A forum friend gave me a tin of this he acquired at the Chicago show. I read the reviews and seen that many felt this to be a roll your own blend, so I decided to try it to free up space in my cellar. It is indeed, a RYO blend and has no business in a pipe.

I believe Tobacco Reviews is about reviewing true pipe tobacco and not tobacco called pipe tobacco to get around taxes on cigarette tobacco. As such this is a one star not recommended blend. It very well may make a good ryo tobacco and I guess I will find out as I am giving the rest of it to my brother who rolls his own cigarettes. Regardless of his feedback, I will not change this rating due to the fact that it is not pipe tobacco.

What I can't understand is why it is in a tin.

A friend of mine enjoys watching me squirm while I try to decipher blends smoked blind that he provides. Like most long time smokers, I tended to believe I had a discerning palate until I participated in blind testing and then discovered my palate was "dull normal" :). Anyway, he gave me some of this and this "review" is based on one large bowl and one small. As with all reviews, but especially with reviews based on a small sample, reliance is at your own risk.

Bordering on tasteless but with a wisp of Virginia sweetness coming through at times, along with the faintest hint of earth and an occasional harsh blast, my first thought was "this would work better as a cigarette". Bingo! Take dat, friend! After smoking the first bowl, he told me it was a D&R blend, a company accused (rightly or wrongly) of packaging RYO cigarette tobacco as pipe tobacco in order to escape taxes. Judging by the reviews here, few people are fooled by this practice... if indeed that's what is happening (wink wink). My other forays into this blender were much less than satisfying, which is probably why my mischievous friend so enjoys toying with me. This one was not as harsh or robust as the others I've smoked - quite the opposite, this one was mostly bland, making me think it would be best inhaled through a tube. The nicotine via my pipe wasn't too heavy but it was noticeable. The cut was just north of a shag... call it a fine ribbon. No flavoring or chemical taste, which is good. But my overall impression is that it was just not worth bothering with. If Mark Ryan is a skillful blender, I have yet to bear witness to it, but I'm no expert, either on him or on tobacco in general. I really only know what I like, and this ain't it. Try it if you enjoy something like the new Gold Block or other wimpy blends.

This tobacco would be a complete waste of time in a pipe, so only continue reading if you RYO.

This is my all time every day cigarette tobacco. Sure, I love GH Kendal Dark, D&R Ryback Gold and Stokkebye Amsterdam, but they're too rich and too strong to smoke again and again all day long. More of an after dinner cigarette.

This tobacco is light. Lighter than Penhooker Silver. Paired with a light tube, this gives you a cigarette that is real tobacco and won't have you in respiratory distress by the end of the day.

Flavor wise, there is light Va sweetness, and almost a little of that Lucky Strike toasted quality. In any event, you aren't smoking this to write reviews about, but at the same time it's light years better than any modern commercial cigarette. At $20 a pound it's freaking awesome tobacco.

It's good. It makes a great cigarette. Don't put it in a pipe.

Windsail Platinum is my girls favorite blend of RYO as it is very light and extremely high quality. She went from smoking Parliament cigs to WSP and has never looked back. WSP is a standard ribbon cut that's perfect for your average hand roller that stuffs tubes and is very light both in taste and aroma but the quality is off the charts. This company blows just about every other RYO tobacco out of the water, the only company I prefer more is Bali Shag Blue Halfzware and that's due to the unique topping and strength but would be more than happy if all I had to smoke was D&R stuck on a deserted island... 4 stars for RYO, 3 for a pipe...

Truly, this is a RYO 'baccy. In a pipe, I found it very one-dimensional, somewhat tasty (for a cigarette smoker, which I'm not anymore). Mind you, the tobacco is good quality, I've no qualms over that. I never finished my tin of this stuff. I now use it as a blender—and, in that role, it's been a good partner. So, in the end, this is not a very good pipe tobacco smoked straight.

Given that this blend is often referred to as RYO/cigarette tobacco in disguise I felt a touch surprised by the appearance. Golden brown ribbons, much coarser than cigarette tobacco. That's the only pleasant revelation WPB has to offer. If I didn't consider it bad manners I could think of a few apt expletives!

Downhill it goes after the initial pleasantry. It's bone dry, tastes boring, burns too fast, has hardly any of the idiosyncrasies of a good Virginia, and the room-note's nasty. In all fairness, I like the nicotine quantity, it's rather mild, and it doesn't bite. But these few decent points aren't enough to rescue it. Not recommended:

This is the second of the tobaccos that I bought for my aunt. Like Three Sails it shows up a little dry for my taste. The tin note is grassy sweet and the cut is a thin ribbon. When used in a pipe, there is almost no flavor at all. But when you get some flavor, it is really nice. It is more earthy than you might think. There is some nicotine, but nothing to write home about. I tended to over puff and thus created a lot of moisture in the bowl. The volume of smoke was pleasant enough but the room aroma was still totally that of a cigarette. And, speaking of cigarettes, I did try rolling some, but the flavor was still too light for me. If you are looking for an ultra light smoke with some flavor, this may be the one for you. I smoked it both in it's dry state and with some hydration and got the same results. Perhaps I will try the Windsail regular, but this stuff will just be filler in my jar of Prince Albert Choice.

Good grade of Virginia tobaccos. Absolutely no stems,seeds or shake. VERY few bits of leaf vein. Great taste,and I detected no flavorings. I stuff in full flavor tubes,and didnt get the "hit" on intake that one expects from a cig...however the taste is in a class of its own,and the nicotine level is great..Im a former Camel filter smoker,so for me to detect nicotine in a ryo..it has to be THERE!! This tobacco in a ff tube is almost as close as you can get to a Marlboro light or medium. Pretty much identicle. I seriously doubt I could tell the difference between them and this tobacco if I were blindfolded. Good by itself,or as a mixer.