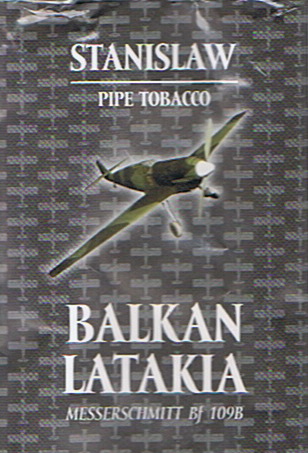 Made from selected Virginias, Orientals, 10% black Kentucky, 40% Latakia with a pinch of Louisiana perique.

First of all: Any likeness of this tobacco to the renowned past Balkan Sobranie (i.e. whichever pre-90's incarnation of it you mean by that) is delusional and almost makes me think of paid reviews haha (of course I am not accusing anybody of anything, as a matter of fact I am even smiling wide while writing it, but still). That in mind, here's what I tried to make an unbiased review:

I was (and technically still am) an avid lover of MacBaren HH Vintage Syrian. When the tobacco supplier who imports any and all pipe tobacco into my country (yes, there is only a single one) took it out of his roster, I wept manly tears of sorrow and the regret of not having hoarded lots of it before kept me awake for a night or two. Ordering online is madness with the current law situation and my visits to countries who still sell the tobacco are not many and far between since I changed career. What to do? Desperate, I went to my local tobacconist and cried him a river, which made him hand me a 50g pouch of this to make me shut up. Unsure what to make of this, I tried it - tobaccos of this blender have a rather bad reputation here, both online and among some of the local pipe smokers there are people who have a vast array of slurs for it (and other Stanislaw/Mostex), some even rather harsh and politically incorrect because of its Czech origin.

NB: The following is based on and written after smoking the original tobacco, I've come around to cut it with 15-20% of bulk-bought Burley and a pinch of additional Latakia since (tried both in a sudden booze-fueled idea, liked it even sober). Gives you a careless daytime puff with a nice hit at a reasonable price still (YMMV). Enough of my anecdotal mixing as it doesn't count for this review, I'll try to only note what I remember of my thoughts when I first bought it:

After having finished said first 50g pouch, I must say it isn't as bad as I feared but not as as great a "substitute" as told by the seller. It's sort of a cheap alternative for any latakia fiend who can't get his hands on his poison of choice; if HH VS was my heroin (figuratively), this is my methadone: different taste, method of handling it and effect - but it does the trick when times are harsh, to keep to the over the top drug analogy. Burns hotter than I'd like it to even with the noticeable moisture in the pouch (couldn't explain why), needs at least two relights - most times 3-4 - per bowl no matter your technique and leaves considerable dottle even with careful smoking, but I've seen far worse, believe me, with enough bowl size and a bit of patience it's not that annoying. Not even gonna comment on Syrian vs. Cyprian Latakia here because honestly, life is hard as is, no need to rip open half-healed wounds. The latter is not that awful, either.

Strength: Medium I guess. Tobacco strength itself is almost mellow, Vitamin N is of course somewhat noticeable but would only upset people with little to no tolerance if they don't smoke 10 bowls of it a day (re: cutting it with rather strong Burley in a drunken haze hehe)

Flavoring: Mild to Medium, there certainly is some, although I couldn't put my finger on what it exactly consists of. Could use less but what am I gonna do.

Taste: Medium to Full. As I said, it's not half bad and does the trick but I can perfectly understand why some don't like this blend.

Room note: Tolerable to Strong, SO nags but so she does with anything that isn't Captain Black or Clan (both of which I've come to loathe); it reeks up most smaller rooms but it's not that bad if you already used to outright Lat-bomb yourself in the past. I can sense an ever so faint hint of the mysterious topping in the room note too.

Overall Rating: two stars. It's nothing to write home about, but by far not as bad as some make it out to be. A nice addition to my rotation when I am not up for spending the money for a 100g tin of Rattray's Black Mallory, This tobacco has made me keep my sanity after McBaren HH VS was not available to me anymore and while it's most certainly not a top-shelf alternative to it, it's fine for reading or a cold winter night if you're not that much of an elitist. I'd rather stop smoking altogether than make this my desert island blend, but for day in day out puffing at a fair price, it's acceptable.

Age When Smoked: fresh; small batch aged for half a year - meh

Similar Blends: with your eyes closed and your nose pinched Mac Baren's HH Vintage Syrian (not really haha) and with the right drink along with it and some imagination Rattray's Black Mallory, although I doubt most would agree to either and I can't say I don't grasp why.

A relative of mine was on holiday in Prag went to a pipe shop and called me from there. A nice lady from the shop offered me this tobacco on the phone as soon as she understood that I love Latakia blends. I am glad she did. It may not be a very complex tobacco but it smokes nice, burns well and tastes very good. For me it is a nicely done example of a Latakia blend. Can smoke it all my life. But as someone said "where to find it?". Recommended.

Cheap price and a cheap quality. Not dramatically bad, but this is one has the worst smell from all latakias that I tried. I know that latakia is not a perfume in world of tobaccos, but usually mixtures of latakia have some kind of nobility in odour like smoke-dry pork. Now, Stanislaw Balkan Latakia is more than that, it's smell is trully hard one and stays in room longer that every other latakias.

Taste is quite not bad (little bitty), but still, I suggest to use it as a part to one of yours home mixtures with other cheaper components.

I bought it on Kiev after being pressured by the seller. I finally relented and got it, and I haven't regretted it at all. The question now is where I am going to find it now. Syrian Latakia, Kentucky, Burley and a pinch of Perique (that does not bother me) are its ingredients. It has incredibly sweet taste, smokes smoothly, of course no tongue bite. Its moisture is ideal. As for the room note… …better let it be. I have smoked half the pouch on its own.

As for the other half, I mixed it with Erinmore Balkan Mixture. The results where even better

(The aircraft in this one is Willy Messerschmitt's venerable fighter (I think it was misspelled "190" somewhere on my pouch). An early model B variant with the (relatively) weak engine would have maybe fought in the Spanish Civil War, but probably been phased out already by the start of WW2.)

Opening the pouch the pungent aroma of Latakia is immediately evident, though not overly so. Physically, there is nothing wrong with the tobacco; the fairly clean cut ribbon of dark browns to almost-blacks burns well and consistently, clogging the pipe a bit but not too much.

As for the smoking experience... Sad to say, but another slight disappointment. Again, I really really wanted to like this, but remain still waiting for that one Stanislaw holy grail. If London Mixture was poor man's EMP, then this could be likened to poor man's Nightcap. Somehow, the taste feels a little bit coarse and unfinished. Nothing wrong with it per se, but sad to say, would probably not buy again.

Perhaps its dryness, I think the components of this mixture are not the best. After I regenerated it, I found it to be a not so bad tobacco, although a bit flat. 3,0/5 in my personal rating system.

Not as good as London Mixture of the same producer.The sweetness of the cavendish overlays tha rest of mixture. Similar to Mac baren HH Vintage Syrian but less good in my opinion.

Bought this from Spain along with London Mixture by Mostex/Stanislaw. This is sold at a very good price, and it delivers a great punch. A great Latakia highly recommended!

I bought it by accident, what a lucky accident. Loved it on the first try, actually one of the best tobaccos I smoked! Bravo Herr Stanislaw!

Horrible tobacco! There is no connection with Balkan Sobranie. That's a lie and delusion.

this one is for latakia lovers. i found a bit hard to detect other ingredients. it burns well and it is very good, unexpensive tobacco.

It is now more than 20 years since I tried the legendary Balkan Sobranie. (For globbetrotting reasons I skipped my pipe smoking all thesse years. A recent come back led me to this interesting substitute. Reminiscences are there. But I feel is still not so close to the classic one, but I am enjoying it. Price / quality ratio is very good. Particularly if compared with most common duty free offerings... I will continue buying it. But is not the only type I will smoke...

Excellent tobacco with a high percentage of Latakia, oriental and Virginia. If you have the opportunity - make sure you buy it! Some even say that it strongly resembles legenedary Balkan Sobranie! And not alone in that opinion!