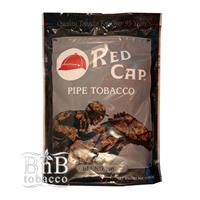 With a tradition that dates back over 95 years. Red Cap Tobacco is a winning blend of aromatic Virginia, burley and other premium air cured tobaccos. Our special Blend No.7 also includes a hint of rich cavendish tobacco for a truly unique and flavorful smoking experience. We hope that you enjoy.

Many looking for a decent cheap smoke will eventually run into this tobacco. I found it in what is primarily a cigarette store. The pouch aroma is pleasant but slightly flat/dull. Upon lighting the tobacco, you can instantly taste the bitterness of the blend. After several minutes the bitterness of the tobacco starts to be a little overwhelming and unpleasant. I chose not to finish my bowl of it.

I found a pouch of this and the red label stuff in my cellar. I feel the same way about this as I do the red label pouch version, except with more conviction. -See my review of the red label blend.

Not recommended for use as smoking tobacco. If might be useful powdered and applied as a natural insecticide dust on your tomato plants. If you don't have a garden, I recommend using it as kindling for starting a fire. Avoid the smoke.

I'm not a big "review" guy, but after stopping at a remote Rt.66 gas station and finding a small pouch of Red Cap Blend No.7 as my only option, I felt that giving a review was my obligation to society. I will however try to keep it short and sweet. So here goes...

In my humble opinion regarding Red Cap Blend No.7, the only way that you're actually going to enjoy it is by not buying it or attempting to smoke it. The taste can be compared to licking an ashtray-flavored 9 volt battery. It bites the tongue like a brand new Energizer, and tastes just like an old ashtray with a slight undertone of vomit. It would be well suited as a gag gift, or as other reviewers noted, RYO if you're in prison. But pipe tobacco it ain't. Don't do it, even if it's your only option. You'll be glad you didn't.

I cringe every time I think about how rancid blends 1-6 must have been before they settled on marketing this one.

Age When Smoked: Who Knows?

This is the winner so far for worst pipe tobacco ever. If curiosity gets the best of you and you feel you must try it. I suggest buying one of those $2 cobbs for the task. It would be a crime to grace a fine pipe with this stuff.

Bought this one and it's brother at the same time. Harsh. I started to get some bite out of this one. Must be mostly Virginia in this. I couldn't detect any of the cavendish it's suppose to have. It's not for me.

If you're broke buy a cheap pack of cigarettes and break them up and put it in your pipe. It will taste better.

The only reason I gave this two stars instead of one is that it mixes well. This is mostly just cigarette tobacco with a tiny bit of cavendish added. Too much cavendish to roll into a cigarette and far too little to be called a pipe tobacco.

It burns easily enough but with little to no taste until you happen to hit a tiny bit of cavendish. That taste is fleeting to say the least. Burns fast, lights easily. It will not ghost your pipe since there's no flavor in it to leave behind in the first place. For .99 cents a pouch I'd rather spend the dollar on a McChicken instead and just gather some dry tree leaves to smoke in my pipes.

The quest for the best cheap smoke continues. The pouch aroma is great! Smells like good Turkish blend tobacco. Moisture content perfect. Burns good. Bitter to me. YUK! All the way through. Tastes bad. Didn't expect much for $0.95/pouch, so not greatly disappointed. Really nice not to have 12oz of this stuff. Lol. Prince Albert Choice Blend smokes better.

Red Cap Blend No.7 I think its funny to read these reviews because of the way this tobacco is viewed and when smoked I know its not as bad as one makes it out to be (mellow dramatic) just a hint I detect. I view tobacco on a whole different level then some pipe smokers in that I LOVE tobacco in (most) of its forms for the pipe. Now this blend is not complex but very simple, its good old pure flue cured tobaccos and if you want to or enjoy tobacco in its natural form then this is a great blend for that. The virginias and burley are flue cured and then cased and there you go, then they use a basic burley cavendish I'm sure from the same bundles that's cased and then mixed up and topped with a sugar water solution and there you go Red Cap No.7 just pure simple tobacco for a pure simple taste. If you love the taste of tobacco just as it is then you will like this blend. I do enjoy smoking this when I'm driving or just doing something because it is smooth, has a fair amount of nicotine and taste like sweet farm fresh tobacco, nothing to special amd that's what makes it enjoyable. You can also use it as a blending tobacco because it is very neutral but saying that its gross? No I disagree its not at all, its just basic. Sometimes I smoke it if I wanna enjoy just a straight tobacco taste this blend will give you that but honestly thats it. If you wanna spice it up with alittle Kentucky fire cure and black Cavendish like Lanes BCA to keep it mellow that works well with it, your imagination is endless with this one OR it goes well with a basic beer or a cup of coffee just simple. If you look at it like all this I wrote out then you'll appreciate it for what it is, nothing more nothing less because its Red Cap. When I think Red Cap I think of a tractor driver plowing away on the field smoking it in his corn cob until he he's home to fill his pipe with something good he can relax with. That's it with this review God bless all you pipe smokers, keep the faith, stand up for your tobacco smoking rights and God bless America!!!

Cheap, OTC gas station tobacco. One of the RYO cigarette tobaccos that got branded as pipe tobacco as to avoid some taxes. Cheap and easy to obtain.

In the pouch the tobacco seems to be a little on the dry side. The aroma is nice but seems a little weak. Packs incredibly well, easy to lit and stays lit like a dream.

The taste is a little bitter, but enjoyable for me. It tastes natural, with little to no flavoring that I could detect. Someone who prefers natural tobacco may enjoy this. Burns fast and can get hot pretty quick.

Some friends of mine use it for RYO cigarettes, and they enjoy it more than some other RYO brands available, though they prefer the original Red Cap a little more.

If you are into RYO cigarettes, worth a try. For a pipe, it is alright, would do in a pinch but I would suggest trying other options first.

I didn't know any better, and it was cheap. I will try aging this one to see if it gets any better.

i rather like this tobacco, granted it may not be the best one, however for the price, you can't go wrong. it is left to preference. though i do hear from some around me that it smells of marijuana which i simply can not stand.