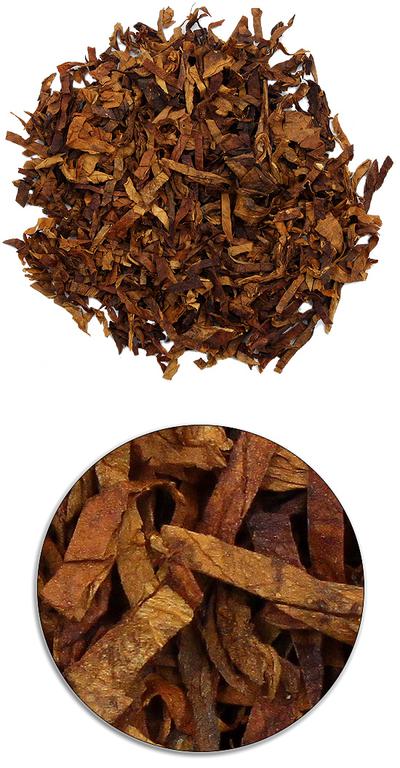 The tobacco itself was delivered very dry and consisted of a short narrow ribbon with a few "fish flakes." It was a mix of shades of light tan and brown. I tried it as delivered and with the addition of some moisture. The hydration brought out some flavor and slowed down the burn rate.

Smoked, it was good but not very exciting. It was slightly sweet and tart. I did not get much fruit, but there was a little. It burned cool and was an easy smoke with the flavor level on the mild end of the mild to medium spectrum. It terms of strength, it is a mild smoke.

This is a decent smoke, and I have no regrets. I am unlikely to buy more, but if I had a pound of it, I would not be challenged to smoke it up. I am not a blender, but I can imagine this might work well for that.

This straight red Virginia is lightly tangy and more tart with some dark fruit sweetness, some earth and wood with a slight vinegar, bread and sour, acidic notes. Has a minor spice hit. The strength is in the center of mild to medium. The taste is a step past that center. The nic-hit is just past the mild mark. Won’t bite or get harsh. Burns clean, cool and a little fast as the tobacco is fairly dry. Has a mostly smooth, sweetly consistent flavor, though it loses a little sweetness in the last quarter of the experience. Leaves very little dampness in the bowl, and requires an average number of relights. The after taste is kind of bland. Lacks a little of the depth one usually expects from this varietal, but has enough flavor to work as a mixer, and an all day mindless smoke. Two and a half stars, rounded down to two only because there are other blends like this that have more depth of taste that I have rated at three stars. It does work better as a mixer.

I find some of the reviews somewhat misleading. The idea is to review this tobacco both based on its blending potential and on its own. For starters, I'd say this tobacco ticks a few many boxes in terms of what I expect from all Virginia type tobaccos. It has earthy and hay undertones, does not smoke hot in your bowl, it won't scorch your tongue, has plenty of aging potential, and it is quite good in its own right. As this is just a base tobacco with no added flavours, it can be enhanced with the addition of perique, cavendish or other Virginia leaf. And yes, I can see there is plenty of potential here. Beause this tobacco is borderline full in the taste department, I think it would certainly benefit from an addition of twice as much bright Virginia leaf to tone it down. As you progress with your smoke it gets creamier and creamier, so not boring at all like some reviewers seem to be saying. Every now and then I detect sort of a cigarish undertone, but not very pronounced. If I come to think of how much this tobacco costs compared with other brands in the same range or tier, this tobacco has an added bonus in terms of excellent value for money. All and all I find this tobacco above the standards in many fronts, so I am happy enough to award it with 4 stars.

This is an easy-going tasty all-day-smoke Virginia. It’s smooth, doesn’t bite, and burns to nothing but ash. It is not as sweet tangy or refined as Carolina Red Flake but has some of the same flavors. Rich bready notes, spice, earth, and subtle fruit notes mix throughout the bowl with a toasty finish. This and Bright Virginia Ribbon are a terrific value for high quality Virginia’s.

I was somewhat surprised by this tobacco since my previous experiences with red virginia was in blends and with McClelland's 5100 Red Virginia. This is no 5100.

Rather dry in the bag, C&D's 525 lights readily and has a strong, almost cigar-like flavor and aroma that develops more as you go down the bowl. There is not a tremendous depth and variety in this tobacco, but there is a good deal of strength and the nicotine level is high.

I find nothing wrong with this tobacco as a straight smoke and imagine that it would blend well with other tobaccos. Unlike McClelland's 5100 I do not forsee blending this with stronger mixtures to cut them back--on the contrary, I can see using this to strengthen those I find lacking.

Although straight virginias are infamous for biting, I have experienced none--and I have a tendency to puff hard and fast.

A tasty tobacco that I reach for when I want a cigarish blend. Recommended.

I got 4 oz. Of this to play with a few months ago. It's not what I hoped for but it wasnt bad. I got it to try blending my own blends but let's face the cold hard truth, I really suck at it.

The moisture was a little on the dry side. From first light to last puff it is red Virginia, kind of sweet, savory, and a little bit of that virginia spiciness. It smokes cool and clean. It does start to have an almost play dough like character to further you go down the bowl If you case it with some sugar water it helps with the sweetness and brings out more character. I prefer the Red Virginia Cavendish over this.

Edit 3-16-21. Coming back to this, I must say Red Virginia Ribbon has grown on me a lot. I dont get the play dough character anymore. The sweetness is much more pronounced. A nice nuttiness is there during the first 1/3 and the typical red Virginia spiciness is present throughout the bowl. Towards the end, the sweetness turns into a powdery sweetness. There is enough nicotine to keep me well satisfied too. I really like this a lot.

That being said, this has grown so much on me that it's all I've been wanting to smoke the last few days. I've been enjoying it so much that I now have over 2 lbs of it and will be getting more as time goes on. I'm going to press some of it to age for a few months to help with some of the rough edge its has. Hell this has even jumped past Peterson Elizabethan Mixture as a go to.

It brings back memories of the earlier times I started pipe smoking. I like to reference Mcclelland 5100 a lot because it was the first straight Virginia I ever smoked. Samuel Gawith Best Brown Flake ( before the Gawith and Hoggarth take over ) is another one I like referencing. I use both of these as comparisons with other red or darker Virginias because imo nothing else was a unique as them. C&D red Virginia ribbon is 5100 and Best Brown Flake combined. My initial rating was a 2 star but it is now a 4 star.

Like Mike McNeil stated before. " If you really like something then buy as much as you can because who knows what the future holds".

This was from 4noggins so as always the moisture of it's great, I'm yet to have a bulk blend from them which is too dry! The ribbons are a mixture of medium brown and yellow and some are a little twiggy; a bit twiggy but still smokeable.

The smoke: it's a deeper Virginia than some of the ones that only give sharp citrus, or hay. The smoke has all of the characters I love from a Virginia: tanginess, dark fruit, and sweetness. There's no added flavouring, the smoke's pure and rich. It burns cool, and very independently, albeit quite fast if puffed with vigour.

Red VA Ribbon comes very dry and the ribbons were often broken into smaller pieces. The jar note is very earthy and slightly tangy after 6 months but not much else that I could pick out. The smoke was consistent throughout the bowl. I got a mild tangy note, at times a little sharper moving toward tart, earthiness and just a little note of dark fruits that stayed in the background. This does not hold up to what I expect in Red VA's they should be very tangy, with a lot of dark fruit out front. The finish on this is also very short. Great when moving from one big blend to another as an in between bowl but not really what red's should be about IMHO. The nic is at the upper end of mild so it could be an all day smoke as it certainly will not overpower the palate. The notes stated that it has aging potential but in my experience I have more luck with blends that are fuller than this one. Not enough sugar here to really turn sweet either for what it is worth. If you do decide to age I would recommend hydration before as it comes too dry as well. That said it is not a bad smoke. I did finish my 4oz. and would smoke more if I had it but I don't see myself buying it again and hence the 2 star rating. There are just better reds out there.

This leaf has your expected dark fruity, tangy/acidic notes expected with a red virginia. I also noticed some vinegar and earthy and a slight spice occasionally. The moisture level came just about perfect and it leaves little moisture at the end of the bowl. Nothing spectacular here however. I bought a half a pound purely for blending purposes and it will stay as such. Unlike C&D's bright Virginia, there is little here to entice me to smoke it solo. There are better red virginia blends out there and especially better stand alones.

Ribbon cut, straight Red Virginia. Wonderful pure tobacco to blend or smoke on its own. Top quality. Quite dry tasting but with a lot of flavor and some complexity, earthy, even fruity, difficult to describe but it’s an excellent pure tobacco. Comes quite dry and smokes quick but moisture can be adjusted. Wondeful as a blender with Orientals. Highly recommended for what it is, i.e. a pure uncased tobacco mainly for blending.

It's been a while since this was smoked, but what I remember of it is that there are more satisfying red virginias out there, such as McCranie's Red Ribbon. There are plenty of Red VA-based blends, such as Rattray's Red Rapparee and some Wessex blends.

Comment = Strong Flavor, has a bit of a Bite, This is not a very good smoke

I ordered one pound of the C&D Red Virginia. This tobacco is stronger than I anticipated. I put the whole pound in a crockpot and set it on low for 10 hours. I can now smoke it although it has a big nicotine hit. Good this way or to mix with C&D Virginia Flake.

I am reviewing several C+D blending tobaccos as a precursor to some blending experiments. I know not many people blend, but these reviews may provide some hints to those wanting to do so.

Sweet, deeply resonant and strong in flavor. Will bite if handled carelessly like most straight VA tobacco. Very smokey and woodsy - increases in cigar like texture down the bowl. Definitely some aging or stoving could bring out the best in this tobacco. But certainly good as it stands.