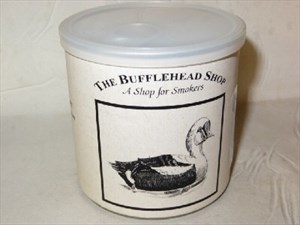 A Virginia cake made of well matured orange and red flake and seasoned with the finest Louisiana Perique. A well balanced dark, satisfying tobacco sliced in cake form. Full Virginia.

King Eider didn't take a back seat to any VaPer on the planet. Smooth, powerful, and beguiling. I kept going back to this blend many times during its short run. About impossible to obtain as few tins show up on eBay and when they do, the well heeled and knowledgeable pipers drown my bids quickly. If you ever do get a chance to try this one; do it!

Ya know how it is when you first try a blend and hope that you will at least like it a little bit, and when you smoke it, it turns out to be an almost euphoric experience! This was the case with King Eider and me. Yes, it is quite similar to McClelland's 2015 but I like King Eider more! It is not as intense as 2015. For the first half of the bowl there is a wonderful, soft sweetness with the nose tingle of genuine perique. The aroma is enticing. The smoke then changes to a less sweet and slightly sour (very pleasant) flavor. It then changes to a peppery flavor (for lack of a better word). All the while the smoke stays cool, burns extremely well, and burns very clean with minimal aftertaste. You can push it and get it warm but there is NO bite here at all! There is a very slight kick of nicotine but nothing that will knock you over. This is one of a handfull of tobaccos that I can smoke to the very bottom of the bowl. It has the flavor of well aged tobacco but I just recieved my order last week. If you like Virginia/Perique blends at all, you owe it to yourself to give this one a try. Available from Bufflehead Tobacco. I will be ordering more of this one. Very Highly Recommended!

Update: After seeing the newly distributed price of King Eider I must change my review of it. This is a shame because it is not the tobacco's fault! However, 3 year aged 2015 is better than King Eider anyway and the price of KE is now absurd!

Update: Bufflehead tobacco's are no longer available at any price so my personal recommend rating must go down 2 stars because even if you found a tin, the price you would pay would be too great.

I recently ran out of King Eider and i was heartbroken to hear i could not get it in bulk, well all is not lost as Iwan Ries started selling Bufflehead tobacco!

12/30/2003 Now this is an amazing blend!!!! I cant keep my nose out of the bag. King Eider arrived as a large flake with no stems, or shards whasoever. It has a wonderful sweet and spicy taste, and the finest room note. No need to worry about being outside in a snowstorm for me.....the perique warms my nose and the large flakes wont fly away when packed.

What more be said? Cheap enough for bulk. Buy a pound and Dave will can it for you. I am always amazed at Buffleheads quality blending. Time to fire up the snowblower, but i got King Eider....

Ok. Not much more to add than what previously has been said. This is a wonderful, dark, rich, earthy tobacco that burns long, lights and stays lit well, and is very satisfying. I have an 8 oz. tin stashed for the future so I bought a 4 oz. tin at the Chicago show. Unfortunately, the price at the show was as much as the 8 oz. I thought Bufflehead was going to sell again, but their updated website lists the companies who will now stock the tobacco. If the prices are the same as the Chicago show, this will not be bought much by this reviewer, just too pricey, and too bad for incredible tobacco.

King Eider is highly recommended for thos who like Virginia Perique blends. It come as dark brown broken flake that can be smoked as is in a larger bowl or rubbed out for smaller bowls. It packs firmly so some care should be taken in that area and lights easily with minimal relights. The flavor starts as a full sweet Virginia with the peppery Perique providing a top note to the smoke.The zesty spice of Perique stays with you througout the bowl providing a nice balance to the sweetness of the Virginias. This is one of my everyday smokes. A fine offering from Dave at the Bufflehead shop. A company that has and continues to provide excellant service and is pure enjoyment to deal with. Highly recommended.

McClelland's 2015 was my favorite Virginia/Perique Mixture until I tried KI which is very similar. I enjoyed KI so much that I orderd several pounds to cellar. Comparing the aged versions of both, I find that while both have improved, 2015 is richer and more mellow than KE. The comparison of a new batch of KE compared to and 18 month old aged tin of 2015 was like comparing a hamburger to a fine prime steak.

There are many tobaccos that justify a high price because of quality and distinction. King Eider clearly loses on the latter.

Given that both of these fine tobaccos as so similar, I cannot recommend KE because of the new price structure. Save yourself a bundle and stock up on 2015 which is roughly one third the price of KE.

The quality of tobaccos used is readily apparent and, as others have said, it tastes fine and behaves fairly well. But, for me, King Eider is clearly a distant "second fiddle" to Bufflehead's "Bufflehead Decoy". BD tastes better, is smoother, behaves and burns much more to my liking, and so I really have to struggle to give King Eider three stars, but so be it. Just too many better V&Ps out there, including within the Bufflehead stable.

King Eider is a broken flake that just begs comparison with McC. #2015- similar color, texture and composition. And like #2015, it is a smokin' deal for the $$$ (pun intended).

I find KE to be just a tad bit mellower yet a bit brighter tasting than a somewhat aged #2015. In contrast to #2015, my sample also required no drying-out time, being ready to go right out of the tin. My guess is that KE has a bit less perique than its McC. counterpart. I prefer the darker and richer #2015 by a small margin, but this may be a somewhat biased comparison given that the KE had not been aged (by me) nearly as long as the #2015 sample.

This is clearly a must-try product for the Va/P aficionado. Oh, yeah, and a much better deal than Escudo, both in $$ and quality.

This nicely prepared broken flake is predominantly darker brown and reddish VAs that have a higher moisture content than I prefer and seem to hold it even as aged. I don't rub out such tobaccos and had to make some adjustments in my packing techniques. I also had better results and much better and evener flavor development in large sized bowls smoked @ a slow pace. The pouch aroma is very inviting and smells as good as many aromatics. Unfortunately, the Perique content resulted in many complaints from the family regarding the room aroma. Perhaps since I smoke straight VA flakes more often, I enjoyed the 1st third of the bowls more than when the spicey Perique kicked in later. However this is overall a cool and effortless smoke if you prefer that taste. Bulk McClelland 2015 remains my favorite in this category.

Upon receiving my package from Bufflehead, I opened my 8 oz. bag of King Eider and inhaled the scent of this lovely tobacco. It has some of the mouth watering tang of McClelland 2015, as well as some of the deep, rich gingerbread/molasses aroma of P.S. Luxury Navy Flake.

I found no shards of stem, as I did in my last order of 2015. The moisture content was just about right. It rubs out nicely. Like 2015 and P.S. Navy Flake I had to be careful not to pack the bowl too tight. It takes a couple matches to get burning well, but then burns nicely. I had no trouble with tongue bite, as long as I took my time and didn't rush. I enjoyed the taste of fine Virginia and Perique, and as with 2015, I relished the odor of my own second hand smoke.

I highly recommend this to any navy flake, Virginia/Perique lover. McClelland 2015 is still my personal benchmark for this genre, but King Eider measures up very nicely.

Finally, the people at Bufflehead are great to work with. My order came quickly and they sent me 2 oz. of an as yet unnamed addition to their Decoy series for my testing and comment. It by the way is a marvelous straight Virginia that I hope they roll out. Based on my initial transaction, they work hard to serve the needs and interests of the pipe smoker.

Give King Eider a try. I think you will enjoy it.

King Eider is strikingly similar to McClelland 2015. It's a wonderful blend of Virginias with a healthy dose of perique in a beautiful broken flake. I'm smoking King Eider in a Ser Jacopo full bent as I write this review. It's sweet, tangy, and complex. Highly recommended for VA/perique lovers!

This is a very pleasing full-bodied VA/perique, rather reminiscent of St. James Woods but a bit fuller and richer IMHO. The perique hits the nose as the bag is opened. The broken flake rubs out and packs easily, but is just a tad moist so don't overpack. If visuals are any indication, this has a hefty perique content, lots of dark brown with the red-orange VA. I favor a large bowl with this blend. This stuff crowns very nicely if you enjoy that effect as I do. Light it up in the dark and watch that cherry flare like a cobra. The first thing to hit the palate is that Bufflehead knack for clean-tasting zesty VAs. The perique is there, but the first part of the bowl is a VA experience, with the perique dancing high in the nose. Like most tobaccos, this stuff hates to be hurried, but is actually pretty game compared to most VAs. It burns evenly and completely in the right pipe to a very pale grey ash. I struggle generally with complete smoking, but this gives me less fight than most. As the bowl progresses, the perique comes through more assertively, keeping things cool with a tangy spiciness. This is a satisfying smoke but won't give you the spins unless you really chug it. It inhales smoothly if you inhale as I do, but gives good nicotine satisfaction without inhaling. It does fill the room with its weighty dense smoke, and blows good if not great smoke rings. Comparisons are hard to avoid. It is sweeter and a bit less "periquey" than Escudo, has much more sweetness and complexity than Elizabethan Mixture, a bit fuller and spicier than St. James Woods. If you like those blends you should like this.