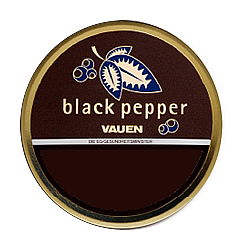 The double-fermented black cavendish based on Virginia and burley tobaccos delivers a uniguely smooth smoking experience with a distinct aroma of black pepper.

Smoked a few bowls (4, I think) of this over a couple of days recently. My experience was very similar to Ambush's review of this blend. It didn't seem all that mild to me, as some have reported. The black pepper aroma is in the tin, in the taste and in the room, though least of all in the room note. I like pepper, so that must make a difference. The double-fermented process does make this Black Cav blend (both VA and BUR used) rawther spicy. But not every one smells pepper; my friend got the spicy but not necessarily pepper. My SO liked the aroma OK and she hates pepper in all its forms. FWIW, my friend's wife did not care for the room note and--believe it--she has smelled many a blend.

I wouldn't smoke this every day (although I would if it was all I had) and I think it makes a better outside than inside smoke, having tried it both ways. But there are lots of tobaccos that I really like but don't want daily, and that's no reason to not recommend it. I actually would give this about a 3.2 or 3.3. For sure, it is not like anything else. I'm buying some to keep it around. Maybe I'll alternate it with PS Cherry Bon Bon!

Purchased From: Provided by a friend

Similar Blends: Nothing I've ever tried..

This was a tin I had bought a few months ago and transfered to a mason jar to celler. It was at a good moisture level to pack, and it did so well, after picking out a few "stems and pieces". It took to the light and burned to the bottom with just a bit of dottle left in the end. I personally love black pepper, and this blend did not dissappoint. The tin note was black pepper, the room note was black pepper, the flavor was black pepper. Slightly sweet, and of course spicy. It is an interesting smoke. I would not want to smoke it regularly however. I did not get the "chemical" description mentioned by others, and it did not noticiably ghost my pipe either. It is a great, unique smoking experience. For anyone who likes Black Pepper, I highly reccommend this tobacco.

This is one interesting blend. I could not smoke it daily but it is so different, I kinda like it as a change of pace blend. It does have the aroma of black pepper in the tin, no mistaking it. it is a dark mottled irregular cut and a little too moist out of the tin but dries to smokable in a couple of hours left out. It packs easy and lights up pretty well, usually a two light start will have it going. Upon lighting up, one immediately gets the black pepper note in the air. it also has a somewhat musty aroma to go along with it. It tastes like a full VA with the overtone of black pepper on the palette. As it smokes down, the black pepper gradually lessens and the burley come out as the dominent taste. It is a real conversation starter, I took some to a meetup with other pipers at a B and M and everybody immediately noticed the pepper aroma and wanted to try it. Most liked it for a little while and then would dump the second half out. It does burn down nicely into a dark grey ash and leaves little dottle on the bottom of the pipe. It does leave a little ghost in the pipe but it burns off with the next bowl. I somewhat recommend this blend if only to try a truly unusual tobacco.

This is mild and strange. It actually tastes like black pepper but with a sweetness to it, kind of a sugary pepper. Peculiar indeed. But it actually works fairly well, it is quite pleasant! I enjoy weird stuff that surprises me so it's up my alley. An all day every day smoke this absolutely is not, but it is a fun change of pace.

Medium on the nicotine.

Comes wet. We are talking so wet that the cover paper placed on top of the leaf is so moist, that once removed I left it out to dry for a day and a night - and it is still moist! Needs some serious drying and some relights. No bites though so that's nice.

Well if you want something odd, do try this.

Similar Blends: Nothing. This reminds me of nothing else that I have ever tried..

A very interesting blend. The tin gives off a strong peppery smell that one anticipates an equally strong and spicy smoke, taste. On the contrary, it is quite mild to medium in taste.

A black tobacco with a sparse sprinkling of brown mixed in. It has a tin aroma vaguely resembling cracked black pepper, but not spot on. It packs easily, but doesn't take well to the match. The initial flavor is burley, providing a thick mouthful of creamy smoke with a slight peppery aftertaste. However very shortly the topping takes over providing a medicinal/chemical taste. Some Virginia shows up halfway through the bowl adding some sweetness, but can't be enjoyed due to the industrial tasting topping. The room note tries to resemble black pepper, but use of imagination is required. After half a bowl, tonguebite rears its ugly head and continues till the end. I smoked this in three different pipes using various packing methods,but I couldn't find a way to enjoy it.