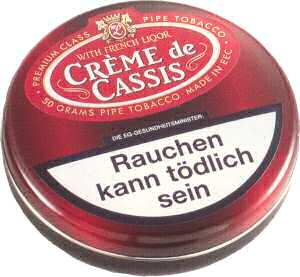 With the aroma of currant. Fruity and highly aromatic. Mildly and spicy.

I have been going through my cellared jar collection lately revisiting some old friends and enemies with my preferred Falcon, Alco, Brentford pipes of late to examine the tobaccos I haven't touched for a few years.

Some tobaccos have a shelf life where they get worse with age: Some keep well and preserved where they taste as good as first smoked: Others improve in ways where they taste greater than their initial purchase price and equal a genuine investment.

I have dipped in and out of this aromatic over a 5 year period and can say that it is one that stays the same. It doesn't get worse or better.

I am not much of an aromatic man I will admit but this is a better one and certainly memorable.. Not only is it aromatic it is also tobaccomatic in that the base tobaccos are an interesting toasty mix that have some taste in its their right.

This is a strong aromatic and qualifies as an aromatic bomb! I admit I quite like it; its a unique fruity and floral aromatic like summer punch; its like strawberries, cherries and rose petals ;a real pot pourri in a pipe that tastes like it smells in the tin.

The tin itself is like a cosmetics product ;two halves held together by a band of sticky tape. Inside is a clear plastic bag with the content tobacco.. This one was dry in the tin from birth and has never been moist. I have a feeling this smokes better for being dry, aromatics bite less when dried in my pipe. By the design of the tin which isn't a vacuum preparation I think Crème de Cassis is sold dry by design.

Nicotine is mild but the body is quite full and its a sure toasty smoke. Burns quite cool for an aromatic and behaves better than many.

Crème de Cassis is not a biter in my opinion. The room note is a sure crowd pleaser and tastes how it smells. One of the few aromatics I have smoked that I would consider repurchasing. The topping/casing is not a synthetic artificial chemical imitation of flavour - it is I believe sauced by a liqueur by the same name.

Another one of my earlier reviews which I thought was rubbish when I re-read! Here's the new version:

I bought a fresh tin for the purpose of this review and was quite impressed when I opened it up. I was met by a coarse cut, prominently medium brown Virginia, blend. Unlike their Black Magic there's only a tiny proportion of black Cavendish. It smells strong of alcohol and currants: Crème de Cassis. For me it took a bit of a nose-dive from there.

On the plus side of things it lights easily, gives a relatively cool smoke, and has a pleasantly mild amount of nicotine. So what's the problem? The topping. As the tin-note implied, it's strong, very strong, at that. There's no room for tobacco flavours, I can only taste berries and alcohol. Sure, a red-blooded aromatic fan would be in utopia, after a few sips. I'm not though!

Here's a good point to finish on: the room note's nice!

Two stars. Just one would be cruel, and unfair; I can see how it would appeal to a lot of smokers!

i thoroughy enjoyed this .nicely packaged in a convenient tin for slipping in the pocket .tin aroma was lovely and fruity and you can taste the slightly acidic but sweet notes of blackcurrant through the smoke .i am testing lots of brands having returned to pipe smoking after a long absence and this was a successful purchase which will become one of my regular standbys .i recommend you try this and im sure you wont be disappointed .

A sickly smelling and tasting tobacco. This aromatic has a very perfumed taste, which has a chemical flavour. I bought this tobacco about two years ago and have still not managed to finish the tin, not recommended.

I do like aromatic blends and have enjoyed several of the other McLintock blends. This one was a little different. On opening the tin the aroma is more synthetic than the other blends I have tried. Whilst the tobaccos themselves are nice enough, the casing is too sweet for my taste. I also found that, although the tobacco wasn't too damp when I filled my pipe, the last third of the bowl became quite damp on several occasions. The steam produced towards the end of the smoke made it easy to burn the tongue and seemed to take a lot away from the taste.

A tobacco for those of you with a sweet tooth.

Heavily cased and syrupy artificial aromatic. Smells like ice cream topping for kids. Yuk. Not a decent tobak in my opinion.