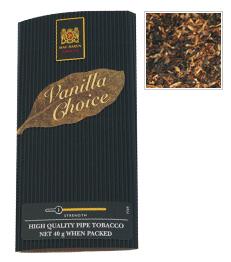 A tender and pleasant pipe tobacco that does not burn your tongue. Filling your pipe with Vanilla Choice is very easy, just as it is very easy to smoke even for less experienced pipe smokers. Vanilla Choice is a loose cut blend of golden Virginia, the modern MacBaren Cavendish, tempered with a unique burley. Experience this smooth and cool smoke with an exciting vanilla taste and room note.

A plain tobacco. No surprises. Probably ideal for beginners.

In summary:Does not taste good...It does not smell good..Not too strong, so is suitable for beginners

Mild, decent aromatic. It's kind of halfway between vanilla cream, and stanwell vanilla imo.. Give it a try if you like vanilla aromatics

While Original Choice is a very decent aromatic, this is probably the worst of it's kind I've ever tasted. And believe me, I have been going through plenty of Paul Olsen's My Own Blend and Mac Baren aromatics, so I know what's bad and what's really bad.

Smells good, as any ol' aromatic, maybe a little too artificial even for the fans of these cased baccos.

Burns nice though, but tastes like some sour cream-cheese with a very weird taste of vanilla, lemon and cumin crackers. Nauseating to the point where I just couldn't go any further. The first tobacco I've ever thrown away.

I'll never understand why the danes are so crazy about aromatics like this one. I absolutely love the more natural aromatics like SG 1792 or Porter House. Cavendish can be a very delicious thing, chemicals cannot..

Try the more natural sister from this series called 'Original Choice', now that's pure sugar and Cavendish for you.

I've just reviewed a tin of Murray & Sons Yachtsman as I needed to open up a new 'evening aromatic'; I wasn't too impressed with that, so I thought "Vanilla aromatic? You can't go wrong"! Let's see how I got on:

I adore the pouch note, it smells like just what I want: it has a good, strong vanilla aroma to it. It looks to be quite a fair split in colour, half black and half brown. It's a little moist but not over the top; it can still be smoked from the pouch. Although it's smokeable it's stuck in little clumps so it needs breaking apart before it can be loaded into the pipe, it's as if it's gathered into separate lumps of Virginia and Black Cavendish. So after a sort of 'rub', I load and light. Despite the mostly negative reviews, I'm in the minority; it's not great but to me it's a good smoke.

The vanilla flavouring doesn't come across as formidable as the un-lit note suggested; it's around medium (for me), yet I expected it to be a full on 'gloop fest'.

There isn't too much in the way of tobacco tastes; a delicate Virginia note with a subtle Cav' sweetness. The Burley, however, goes totally unnoticed.

This isn't a 'brilliant' aromatic, I do feel, though, it's had a bit of a raw deal!

My fourth review of Choice series. A mild tobacco that gives me more cream than vanilla flavour. Burns evenly, no bites, mildly sweetish. Not too chemical, but the chemo is there. Bitter doesn't come out. Left some in the pipe overnight - didn't get ruined like with most aromatics. If vanilla cream from mac baren is your thing - this one is a better smoke for me, but more neutral too. Cavendish definitely improved here, like with all Choice series. I would though not buy it again as it is inferior to "original" or "aromatic" choices to me.

Subjectively, this seems stronger than other "choice" ones, though still very mild.

Purchased From: some guy in Istanbul

this stuff and other mac baren 'choice' pouches is very mild and it is not for pipe smokers who have an experience.Burns fast and have an ideal humidity.May be diffrent taste for beginners

I'm being ruthless on this review because I think that there must be an end to calling things aromatic when they are not. When a fella buys Vanilla anything that's what he wants, same goes for cherry or whatever grabs your fancy. That's my beef with this- you open the tin and it smells like many other Mac products Plumcake comes to my mind. Then there is the smell of it burning , I don't it as the smoker and no one gets it as a inhabitant in fact 'take it outside' is the request. I think the world of Mac Baren products and have smoked them for over twenty years now but I just wish that aromatics would deliver that syrupy smell that the name promises otherwise stick to something else entirely,

Mild and aromatic choice in Mac Baren. Generally found it everywhere. Not good, not bad but you may smoke at out of tobacco times.

after trying the MB vanilla loose cut, i thought i would give their flake a try......for me compared to the loose cut something was missing, couldn't put my finger on what it was but after i finish this tin i will be sticking to the loose cut version in the future.

After giving Original Choice a fair chance, I thought I'd give Vanilla Choice one, too.

I really like Mac Baren's Vanilla Cream. That tobacco, when smoked properly, is pretty sublime. While I prefer Va/Per's, I do enjoy an aromatic from time to time, and when I do, I like vanilla.

This is pretty much similar to Original Choice, just with vanilla. Not really a bad thing. While it doesn't burst with flavor, you get lots of thick clouds of smoke to play with. It's an easy going, relaxing smoke which requires little to no attention, and goes great with coffee. People will love the room note.

It's a bit artificial tasting, sure, but not so much that it bothers my quite sensitive palate. And for the price, I just have to give it three stars. Hard to knock it for what it is because where I live, it's the same price as Captain Black White or Royal - and I'd much rather smoke this.

This one is my regular choice for resting my tongue. Smells too synthetic but doesn't make me feel overwhelmed. Nothing special, in fact it may be just consist of fragrance, but doesn't burn my tongue, and that is what I am using it for.