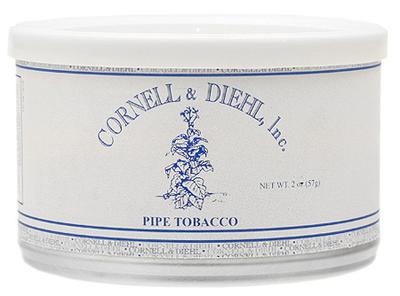 A blend of Cavendish - Virginia blend with that island rum flavor.

The Virginia is a little dull and grassy, rather empty and not very sweet. The cavendish is okay. The Jamaican Rum flavor is decent, but not outstanding, and sports a syrupy note or two. Has little nicotine. Burns a little too fast and hot, even with some hydration, and I'm a slow smoker. The flavor burns off a little at the finish. Just manages to avoid being a biter. Has a very plain after taste. Can be an all day smoke.

No rum flavor at all. But looks and smells like a quality weed while in the can. Packs and burns well. Looks like shag, but wide strips. Lights easy, not overly moist. In fact seems like a very traditional, plain leaf, with no casing at all. One good puff, then it got rough. Really rough. Harshness that burns the back of your throat quickly. I could only stand about a quarter of a bowl. That was 5 years ago. Well it sat on a shelf in a jar for 5 years. During that time I changed a lot, as far as pipe smoking. I learned to truly love a lot of blends that I misjudged before. Still not a huge fan of strong unfired burley, but the hobby of pipe smoking has always been a work in progress for me. Always will be. So I decide I'd take that can of aged Jamaican rum blend off the shelf and try it again. Because it should have mellowed some, and because I have a more mature palate now. Well...its still awful. Dreadful, harsh, and unpolished. In its defense I'll say this. It does have a real tobacco taste. But this stuff is so rough, dry and burny that only a pirate marooned on an island could want it. If all tobacco was this way I would give away all my cobs. Life is too short to smoke this rough stuff.

This offering from CnD smells terrific in the tin, the rum flavoring smells great. Then you light it. The flavor is nonexistent, but that might because this tobacco bites harder than a Nile crocodile. It burns hot and fast, so you won't have to put up with it for long.

A very fine ribbon, virtually a shag, medium brown, of a perfect hydration, with a delicate rummy aroma.

J.R., because of the hydration, takes to ignition easily, and gives a mediocre smoke, but nothing exemplary. The rum tastes lightly added, so don't expect a sharp, caustic, piquant, rum-festival. It's present, but is nowhere near cartelizing the taste. The tobaccos, of which I note more of the Cavendish, give a hum-drum flavour; a bit boring. The burn from J.R. could be better. Sure, it's independent and reliable, but darn it's quick and a little warm!

Nicotine: not much. Room-note: it's best feature.

So, Jamaican Rum? For anyone who cares what I think I'll give it two stars!!:

When you think of Jamaican Rum you think of dark Rum like Myers or Gosling.. With over the top molasses flavor. However this smoke should be called Kingston Breeze as the taste of Rum is faint in the breeze. Pouch note is nice. Long ribbon cut make for easy pack and lighting. The taste is faint rum, but does have an island vibe, like I was outside a bar where they served rum in downtown Kingston but I couldn’t get in. I found it also has a strong nic hit, but that could be because I smoke it hard trying to find flavor in the bottom of a straw rum bottle holder. I do like that it generates good dried grassy smoke. However, About half the Rum flavoring of Sutliffs Spiced Rum. Still looking for my home rum Rum blend.

Deep, rich color. This tobacco smells of brown sugar and rum(no surprise there haha.) It packed okay, though a little tight. This blend needed a couple re-lights and left considerable moisture in the bowl- All of this suggests that this tobacco is very moist and I needed to give mine much longer in the air before packing. I found the blend to be bright and sweet. I couldn't taste rum exactly, but a definite sugary taste was there which unfortunately masked the natural sweetness of the Virginia. I had a great deal of bite from this blend and found the smoke was very hot. Admittedly, I am not the slowest of smokers and I am still working on getting my cadence just right. That being said, cadence does need to vary to account for differences in blends and this one really demands some patience. I have smoked a few more bowls of this blend and when properly dried and smoked slow, it is tolerable; Enough so that I won't waste it. The room note is nice and garnered some compliments from friends, though they all compared it to cherry blend, rather than rum. I wouldn't really recommend this as I am sure there are tastier aromatic VA-Cavs out there (if that is what you are craving.)

Age When Smoked: Fresh, air-dried for 20 mins prior to packing.

It packed well, but gave me more bite than i wanted. It went out randomly a bunch in every bowl I've tried. I did taste the tobacco, which was good. it wasn't all flavoring. Sadly, not worth the money though because it bites pretty hard and burns poorly.

Smoking this blend reminds me of G.L. Pease 'Barbary Coast' which i happen to like very much. They both have rich overtones of Rum or Brandy which makes them extremely delicious. Jamaican Rum excels in the cavendish department combined with the natural sweetness of the virginias laced with Rum makes this blend a solid three stars as i can smoke this regularly as an all day blend. Different and exciting the tangy sweetness of this wonderful blend finds me wanting more and more. A little mild in the N department but still a worthwhile smoke rich and zesty.

This was the First Tobacco I bought it was OK. Although I threw it away after I bought some Chartwell.

I like this blend late evening with a nice red, very satisfying and burns exceptionally well. A little syrupy at the end; still a very nice aromatic.

Very light to taste and aroma. It wasn't too bad, but didn't knock my socks off. To be honest, I mixed to with Pirate Kake and some Black cavandish and made what my wife calls "Scally Wag"- the rum/cav mix covers the Latakia room note and my wife thinks its great. Best of both worlds I guess. You try it and see....