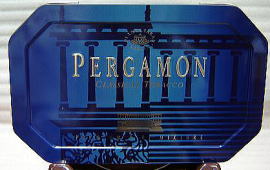 This is printed on the tin, in German Language (translated to English): Pipe tobacco which the gods love. This tobacco, a composition from the classic tobacco cultivable areas of the ancient world, spoils the palate of the pipe smoker on the most exquisite one. Noblest Virginia degrees, with hand-graded Oriental tobacco and twice fermented black cavendish, rounded with Greek wine and precious Middle Eastern spices. The result is this mild, tasteful mixture.

The worst Planta tobacco ive tried so far. The orientals are there, the wine is there but soon youll discover, as a colleague pointed before, that you are smoking some sort of marine monstruosity. It left your palate full of salt, this is so strange. Anyway dont you bother on get this one

Bought this one according to advice in a nice metal 100 gr tin.Smells nice when opened but not too strong as aromatics.Couse of package looks like a flake at first (pressed) d,d have no problem filling the pipe also burnsd very well not too fast or slow ,also easy to have a steady smoke 8especially for novice) ,one thing very good about this tobacco that I did never had a tounge bite after 4 tins.Leaves a light grey small sand look like trash at the end. About taste nothing very special but you feel tobacco taste for sure to the end of bowl the taste somewhat turns to a bit sea salt taste (at least I feel like that) not disturbing but a bit strange. Nice middle day smoke stuff for me with good nicotine satisfaction.

Now presenting, at long last, the butt-end of the tobaccos I purchased in Europe in late 2013 (the others being, in order, Saint Bruno, Mac Baren 7 Seas Royal, Condor Green, Amsterdamer and now the blend apparently made at the request of the Gods). Pray, continue.

Pergamon is yet another one of those many somewhat perplexing European aromatic blends that seem to be bursting from the shelves of every tobacco shop on the continent. They're everywhere you go. This blend is difficult to describe in regards to taste—spicy is one word that comes immediately to mind. Not spicy in a perique sort of way, but in a spice kind of way. But, which spice? Perhaps some clove, or maybe cinnamon. There was a slight whiff of wine, but Greek wine? Who knows.

This stuff really burned hot and fast, a bowl lasted less than twenty minutes (I used a trusty Kaywoodie with a mid-sized bowl). The tobacco was on the verge of nipping me towards the end, and thankfully, the experience ended before any damage was done.

Pergamon is not the worst tobacco I've experienced thus far, and, quite frankly, a person could do worse, a lot worse, but I'll leave the rest of this blend to feed my garden—the garden where I'm growing a golden apple to appease the Gods who I'm sure will look down on me for giving such a sad, sad review.

Purchased From: A pipe store in Paris, France, in 2013

This is a well stored tobacco,in a beautiful blue printed can, well enveloped internally in a golden metallized pouch.

In Brazil, this is the most well known between the Planta (Deustschland) blends.

I noted the Virginiaa and the richness of the Orientals, bu I not note easily the Black Cavendish.

Because it is cased with Wine (noted both in the tobacco and in the smoke), it rassembles other tobacco from Planta: Cellini Forte, but Cellini Forte is better.

Good for me, but it burns so hot and fast and it have too Nicotine for an aromatic.

A very nice aromatic with almost no tongue bite and good burning qualities. The wine flavoring is strong, but it still ocasionally let Virginias shine thru. Not so for Orientals, lost behind the other leaves and the casing.

If you like Cellini Forte, this is similar without the tongue bite. Not of my liking, but still recommended for its quality.

Like it or not Pergamon is sometething unique! Only needs one match to ignite and burns cool and even right to the end when it turns to fine white grey ash. The first few puffs are exactly what i expected, a typical sweet and artificial taste like so many aromatics out there. A taste of marzipan and chocolate maybe? After half of the bowl the orientals kick in and then it´s getteing weird! Burning spices come to my mind like oregano or marjoram. Not bad but also very uncommon and something one must like! On the other hand the room note seems to be very pleasant as lots of bystanders noticed. Also ther´s no tongue bite whatsover... Surely not the everyday smoke but one should give it a try as it is something really different.

This certainly is one of the most hated Planta blends. You either like it or you are positively repulsed by it, with no middle ground as it seems.

Presentation, tin note and tobaccos used all are excellent. Also this blend is easy to pack and easy to be kept lit.

The taste is of some very undefined kitchen spice with alcohol plus an extremely nasty by taste that is hard to describe. I'd say the salt/seaweed comparisons of earlier reviewers are not far from the truth.

I do not at all recommend this blend. Stay clear of it as there are no benefits to this blend except maybe for the empty tin, which you can just order at Planta i am sure.

Age When Smoked: They don't print production dates on it.

For those who like vomiting, this is the one for you! I don't understand how this blend was made for production, it is the WORST ever tobacco of my life! And the taste is...salt...and cosmetic sea weeds... Were is the oriental tobacco that company promised? What do they think we are? I waited 2 days for my pipes to get off this awful smell. I thought there was a crazy old lady coming from a cosmetic shop in my pipe... What a disaster!

I did never testes a tobacco that tasted so bad, It tasted like salt!. I dont know really how did they came with such a taste.

It was so unbearable that I was to empty my bowl.

I will leave it to get some air and I will come back to see the salty, irritating taste will disappear.