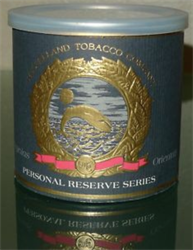 Absolutely the finest red, flue cured Virginias available are aged to create this beautiful flake. This is straight Virginia at its best. The flavor develops subtly throughout the smoke, providing light sweetness and mellow, satisfying flavor. Also available in a fine-cut ribbon.

A Tale of Two Red Virginias, Part I. This is a coarse ribbon cut of dark brown to black hue. A light but mouth-watering earthy hay and fermented goodness in the tin, which was from 1992.

This is what red Virginia is supposed to be about. A whisper of nut and plum sweetness, a lot of fermented tang and a flavor that develops down the bowl and remains on your palate after the last puff is long gone. It's a rich but light flavor with an ocean of depth. Depth is hard to describe but think of the taste of a store bought chocolate chip cookie against your grandmother's recipe. The former is serviceable while the latter is hugely satisfying. This is a different recipe of tobacco from McClellands-branded blends and I can't say what it's most close to... perhaps a well aged tin of Epitome. I'll have to sample some of that. I don't have any #5100 Red Cake that's close to this age but I think this is a different animal altogether. This was an expensive tin, but well worth it. Four resounding stars! McClelland was King of Virginias and their passing is mourned in the pipe community. If you can find some of this and can afford it (I really couldn't but I forced myself!), grab as much as you can if you're a fan of red Virginia.

I'm now down to just three tins of this Levin International Pipe Tobacco (tinned up by McClelland's), and I sure am going to miss it when it's gone.

My tins are from 1990 and about a month ago I decided to open one. Lordy, what a smell! The leaf was very ribbon cut (almost, but not quite shag), and pitch black with sugar crystals all over it. The smell was of over ripened figs with a hint of wine. I loaded up as fast as my quivering hands could get the leaf in the bowl. I lit up and experienced heaven (well, almost), for about an hour.

Sweet, deep and rich, Red Woods was a masterful blend and I wish it would make another appearance.

Firstly an apology if you think that its pointless to review a blend no longer available. I have written this out of interest for those and myself who enjoy reading and writing about this great tobacco House. This was marketed as one of the Personal Reserve Oriental series and my tins date back to 1991 though the one I have open is undated and may be slightly older..

Appearance. A fine ribbon cut (rather than the flake version) of dark brown and black strands, not too moist in this can. The smell from the tin is of a rich plum/damson fruitiness with a raisin background....very akin to a sweet fruit pudding. Utterly delicious, smells alcoholic.

Packing On account of the thinness of the ribbon, it tends to clump in the pipe, so I tend to smoke it in a Barling apple shaped bowl. I can imagine the danger of this clumping together all too easily and the burn not drawing too well.

The Smoke. It lights very well owing to the lack of wetness or humectant in the tobacco. There is a consistent piquant sweetness throughout the experience. I am not knowledgable enough to differentiate all the subtle nuances of flavour though I can frustratingly sense them in the background. I get incredible smoothness (which is expected I guess after 17 years ageing), wafts of intense fruitiness and occasional slight mustiness. If this is truly an oriental, then the blending must have been very delicately done. It burns steadily and DGT is not really an option as it doesnt want to go out! Ends with a clean pile of white and grey ash.

Conclusion. A superb variety. Was created for Levins Pipes and a pity McClelland did not continue to produce it for themselves as it's a very worthy blend. I know there is another Redwoods blend and I haven't tried it so I don't know whether there's any relationship between the two. If you ever get the chance to try this, I urge you to grab the opportunity.