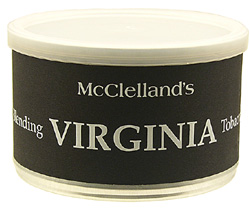 Natural, clean smoking matured Virginia, lightly sweet, more fruity than nutty, not really sharp but a little tangy and pleasant to the tongue (like a mild salsa). We cut it in ribbon form for easy blending. The finest flue cured Virginias fill the mouth with flavor as they are smoked, as if ripening or cooking right there in the bowl.

A little lighter in both color and tin aroma than the Contest Blend I just reviewed, this turns extremely grassy in aroma over time. I've been blending with this one for awhile but hadn't reviewed here yet. Nice ribbon cut and very easy to work with.

As a straight smoke, this isn't terribly exciting. The 3 Virginias are of almost equal measure, with the red being ever so slightly more dominant. And that is, I think, the point. This is designed to be blended with other ingredients, and like a good base tobacco, it doesn't get in the way - it merely adds a foundation but one with just enough zip to it to help out the blend. I've used various Turkish tobaccos, perique, latakia, burley (burley has a way of interacting with this so as to make both tobaccos more flavorful) and this is the finest blender I've tried. If I want a stronger Virginia flavor, I use something else. If I'm more focused on the condiments, this is absolutely perfect. 2.5 stars as a straight smoke, off the charts as a blender. It literally made everything surrounding it better. I expect nothing less from the King of Virginia tobacco. If you're an amateur blender, you can't afford to be without this.

I had to try this one straight out of the tin first. It was very mild, yet had a nip to it. Not very sweet and bland in taste. I then mixed it 50/50 with Five Brothers and let the combination sit for 24 hours.... Now we're talking! This Pipestud version of Half & Half packed some punch and settled the raw Virginia taste.

I suppose this one would work well with other blends as it won't add a great deal to the taste (other than noticiable Virginia leaf), and won't smother other tobacco flavors.

Not recommended by itself, but indeed a good blending agent for you do it yourselfers.

The Virginias are slightly citrusy, a little tangy (from the red Va.), and has a fair amount of grass and some earthy sweetness. It's okay as a straight smoke if you want to do something undemanding while you're puffing on it. As a mixer, it doesn't have enough "ompf" to do much to a blend, unless the other components are stronger. Has a mild nic-hit. Burns at a reasonable pace.

I think SirLoirn below summed it up pretty well... I never tried mixing this and really don't care to. I enjoy this When I want just a simple, straight, lightly-tangy virginia that's not going to knock me over. At times It'll be my morning pipe with my second or third cuppa java... Happy Smoking

Up until recently, I was not aware that McClelland even produced this Virginia. I purchased a tin and removed half of the tin's contents in order to mix with a smidgen of McClelland's Blending Perique. I then proceeded to try the remainder unadulterated.

By itself, the tobacco is surprisingly mild, yet flavourful. I can detect the richness of the red Virginias and the slightly sweet snap of the lemon and orange tobaccos. The first third or so of the bowl was a bit too snappy, in fact, but this never developed into full-fledged tongue bite. The room note was, as one might guess, woodsy and pleasantly fragrant. I actually prefer this to 5100 (although Blending Virginia is too expensive to serve as a replacement for 5100), but it is by no means the equal of McCranie's Red Flake and Red Ribbon.

With the Perique added, the tobacco became even sweeter and snappier. The mixture was actually quite tasty; however, the bottom third of the bowl was a bit too much for me to enjoy.

My skills as a tobacco blender are not top-notch, but I think this is one tobacco that I prefer to enjoy on its own.

Packing & Lighting: Packed until the draw was slightly restricted, it burns well.

Taste & Aroma: Meerschaum Outdoors: A well-behaved VA, it does have a zesty effect on the palate. It is bland until the bottom third, where a mellow VA hay evolves. Only until right at the finish does a taste and aroma evolve which mimics the tin aroma, light and delicate.

Smoked in more controlled conditions, it has a mellow walnut and woodsy taste and aroma from top to bottom.

Caveat: In the first bowl smoked in the briar, I got a raw, unnatural taste like acrid walnuts, and processed wood. It was like a chemical, plastic, that was nauseating. It even felt like the buzz was due to this. The room note was a nasty, acrid chemical smell. I even considered not finishing the tin. But, subsequently, I have not been able to reproduce this acrid chemical walnut taste.

Nicotine: Compared the taste, it is surprisingly present, a decent medium effect which fades quickly.

Overall: Mostly bland, this would make a decent filler, where you wanted a base that does not interfere with other components. BV is blander than C&D's 517R: VA Ribbon, a Lemon blending tobacco; and not nearly the sweet rich taste of McCrainie's Red Ribbon(McCrainie is a partner of McClelland). BV is not worth a premium price, but what is good about it is that there is nothing bad. Recommended only as a low-priced bulk filler(which apparently isn't available), 2.9 stars.