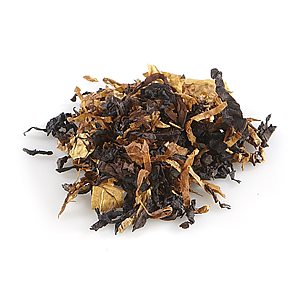 The Virginias are grassy and a little dull. The burley is slightly nutty, and the black cavendish adds a very mild vanilla. The apple flavoring is not as noticeable as the black currant, and I got a very mild sourness with the sweet, more so near the finish, which also affects the after taste. Has little nicotine. Burned decently, somewhat cool (though I recommend a moderate pace as it can burn a mite warm, but avoids bite), and leaves a little moisture in the bowl, but no dottle. Needs a few relights. Not an all day smoke.

It's quite a coarse ready rubbed mix, meaning the smoke would probably be cool should it not arrive brittle. But it came dry as a bone. One point down before the smoke had begun! The pouch smells strongly aromatic.

The flavour from the additives is fairly strong, and also too sharp. The blackcurrant domineers, with the apple sitting a little behind. The apples don't particularly offer sweetness, instead it's a sort of sour cooking apple flavour. I only get a smidgen of flavour from the tobaccos, the topping masks them quite well. The burn's evil: red-hot. And it bites like mad.

I don't like this, and I won't recommend it:

I don't think that this blend is the exemplar of everything that's wrong with a certain style of aromatics, but it shows most of those faults. It's very heavily treated, which I never care for, but this can be overlooked or ignored if there is some pleasure to be had in the taste, aroma, or smoke; none of those things are here. Black currants are a refined dried fruit, a haute raisin for lack of a better term. Whatever the flavorings used, it in no way resembles currants and this is just a huge turn off. The description perhaps gives it away mentioning apple. In my book there is no need to add an apple component to a currant blend, and the synthetic apple flavoring is horrific anyhow. Really poor stuff and not worthy of Stokkebye.

Probably Stokkebye's most visually striking blend, as the dark cavendish is contrasted against the bright virginia in a pretty dramatic fashion. The drama continues with the scent, which is very strong and very sweet.

I realize I've said "just like the other Stokkebye blends" several times, but after trying six or seven of them, I've noticed a pattern. They make them big, rich, and full bodied. Always with a touch of sweetness, always with a bit of nuttiness. If that sounds appealing to you, then just pick a casing. Personally, I don't think Black Currant Cavendish will become my "everyday" blend simply because the apple and currant casing (or really any fruit) isn't exactly in-line with my tastes (although, I do like it occasionally), so I'll be sticking with the Stokkebye whiskey. But, if your palette leans more toward fruit flavors, then Black Currant Cavendish is a really good one.

I'm suprised the reviews aren't better for this blend . It's an aromatic but not wet at all.The room note is off the map . you can taste what everyone else smells . It burns fine . I wouldn't smoke it all day / every day . It's a little warm at first but cooled for me . I'm a big scottish mixture fan and this type of aromatic I don't go for in general but this was a nice suprise

I recently bought an ounce of this at my local tobacco shop. It smelled very good in the jar and the moisture was about right. The taste is sweet. However, let me say that the sweetness is not your typical "candy" type of sweetness. Don't think of cherry, but rather think of raisins. The flavor is consistent through out the bowl. Remember to puff slowly or there will be a bite. It can be forgiving on that score, though. There are too very important factors that make me totally recommend this blend: The room note is very pleasing to my wife. This is her favorite, so far, next to Retriever from Nording. The other thing to note is the kick of nicotine that surprises you about half way through the bowl. This fact reminds me why I smoke in the first place. If I was overly concerned about flavorings I would go out and get a bag of actual currents and eat them. The tobacco taste is somewhat over-shadowed by the sweetness, but the little nicotine hit kind of makes up for that. All of this is to say, when your wife loves it and you can get satisfaction from it, this puts a tobacco in the "go-to" catagory.

Comment = Smooth, Mild, has a Fruity Berry Flavor from Start to Finish

"FORGET IT" Just nothing to enhance it in anyway! "Question?"(Where are the currents???" "SORRY"

Oh how I wanted to like this blend. I received a small sample that came with my batch of BCA. I tried it in a small freehand and thought what a great blend. The base had a dominant mix of black cavendish and smoked great. So, I order a pound to use as a change of pace!! The blend I received was mostly blond tobacco and did not resemble the sample at all. The taste is so-so and the tongue bite will drop you to your knees!! Stokkebye really missed the mark on this blend. I think I will stay with Lane for now. I sure miss Century Tobacco and Hollco Rohr, that used to be in the San Fernando Valley.

Pleasant smelling in all categories and good flavor, but merciless on my tongue. Strange, since I smoke with pleasure Larsen's Signature Blend, all made in the same factory I believe and of very similar constituent leaf. If your mouth tolerates Danish blends, such as Mac Baren, you'll likely have no problem with tongue bite.

Overall, I do think PS is doing a fine job with these Danish Black Cavendish-style aromatics. They are smoother, more natural-tasting than what Lane tends to offer and cooler temperature-wise than Mac Blowtorch. Pipeworks & Wilke still hold the number one place when I want Black Cavendish, such as 191.

I am smoking Solani 633 as I write this review and aromatic Black Cavendish blends just do not hold a candle to it, imo. I love Virginia/Perique flake.

Ever have a Jolly Rancher hard candy? This tastes just like an apple Jolly Rancher, with five or six packets of saccharin.

I enjoy some aromatics, as well as VAs, Burleys, Balkans and English blends. But this aromatic has no redeeming qualities at all...oh, ok, it doesn't bite. That's not enough to save this horrid blend.

It is the most heavily-cased blend I've smoked, and the flavor is unappealing. It tastes mostly of vinegar and sour apples with a little bit of sour cherry, covered with a wet blanket of artificial sweetener. Think bad fruit buried under Sweet 'n' Low. Eee Gads, what a monstrosity!

If you are looking for a fruit-based aromatic, there are many, much better ones out there; Affordable Pipes' "Decadent Chocolate Raspberry", MacBaren's "Cube", and Pipeworks & Wilke's "Cherry Cavendish" are all far superior to this Stokkebye offering.

Not recommended at all.