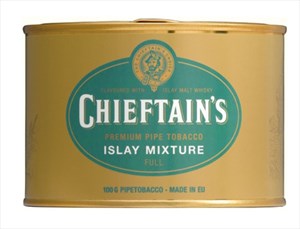 I decided to take a chance on this one when I saw it at my B&M. Tin note is definitely of whiskey and I must say it smells quite nice out of the tin as well as when it is lit up in the pipe. You might even get a compliment from those near you. The moisture level right out of the tin is just the way I like it, YMMV here. Some may need to dry it out for a minimal amount of time. It lights up easily enough and stays lit with not too much effort. The various tobaccos used are of a good quality and the topping is not too over the top. You cannot just mindlessly puff away on this one or the tongue may get bitten. The nicotine level is on the low side for me, but it does have enough to satisfy the need for Vitamin N. This is a limited blend from what I understand to about 2000 tins. So if you come across it, it may be worth your while to procure a tin or two before it is unavailable. Curious if it would age well??? Recommended while it is.

Update 2/9/15...The tongue is getting hammered by this one. After smoking this in several different pipes and slowing down my smoking cadence, it really is taking a beating and submits the white flag. Will put this up for a while and see if some age to it will mellow it out at all. See this one in about a month to test again.

Update 3/24/15....This has not improved at all with age. Unfortunately it is in the trash bin. The tongue bite was just too much to bear. It's a shame too, because this could be a true winner of an aromatic. Just something in it torched my tongue something fierce. So long, farewell.

As a long time connoisseur of fine single malt whiskies - particularly Islay malts - I could not resist buying a tin of Chieftan's Islay Mixture, after spotting it on the shelf at a pipe shop whilst on holiday in Malaysia. Upon popping the tin, I was greeted with a pleasent and rather moist medium brown, well rubbed out flake. The tin aroma is sweet and slightly fruity, with an enticing, but not overpowering, scotch whisky nose. This tobacco is a little hard to get lit, but once burning, it provided a smooth smoke of mild-medium strength, which actually tasted like the tin aroma but with a dry peppery background indicative of a touch of perique. About half way through my first bowl, I found the flavour a little dry and one dimensional, though I wouldn't say unpleasent...perhaps a little ageing will bring out the best with this one, so I will not be to quick to misjudge this one.

My friend persuaded me to buy (I believe) the last can of this premium blend, which is sadly no longer manufactured - just like everything to be as Balkan Sobranie, but that's another story. This is a wonderful, big tobacco and a shame that no more reviews of this tobacco. It is true that it feels aromatic malt whiskey, but it really does not matter, but only adds flavor to Cavendish, Oriental and Virginia tobaccos in this blend. This is a real 'English' mixture as all excellent mixtures it does not change its flavor and aroma in smoking, the only flavor whiskey during smoking becomes a little weaker, but it does not matter. Tobacco does not bite the tongue, even though tobacco is not mild, but still young smokers should be advised to take caution. Recommendation: For each recommendation - buy it somewhere if you still run into him! Not for those who do not like the taste of whiskey in tobacco, or perhaps change their minds when they try!

First of all, if you don't like spirits in your tobacco, then this one is not for you! But if you do, oh boy,you're in for a treat! The Islay malt whisky is very noticable in the tin aroma and most of the smoke as well, and it is wholly natural, just the whisky and no other casing. I feel this is what Mac Baren's Uncle Louis Whisky could have been if they had pulled out all the stops! This is a true English mixture with an excellent balance between Virgina, Oriental, Latakia and a pinch of Perique which adds strength and depth of flavour. The Latakia is always there but never takes centre stage. The burn is very good and cool enough and there is a pleasant trickle in the nose, good medium strength this. I wholeheartedly recommend this fine mixture and it is one of the best incarnation of whisky flavoured (added I should really say) tobacco's on the market today. Enjoy if you can find it! Price is ?16.50 for a 100 gram tin.

9 august 2007: I sure wish somebody else would review this tobacco, I am smoking it daily and admiring it more and more!

Update 18 november 2008 This tobacco has just been discontinued and is now replaced by a "Limited Edtion" version. The green and gold tin is now chocolate brown but the badge is the same. The recipe has changed as well, it is now a blend of Virginia, Burley, Kentucky, Black Cavendish and Perique. The "limited" means that only 2000 tins are produced. Why they changed it into something so different, I cannot tell. I presume it didn't really sell that well. Anyway, this mixture has been aged in bourbon barrels for six months and still flavoured with Caol Ila Islay whisky. The appearance is of an almost uniform brown tobacco with some very small black flecks, also a rather fine cut. There is a full taste of mostly Burley with a chocolate undertone and the Islay that was so pronounced in its earlier version, is now hardly noticeable in the smoke. Still a nice, full and non-aromatic smoke, but it bears absolutely no resemblance to the first version!!

I was given a sample of this tobacco for approx. 3 bowls. I've tried it damp, somewhat dried and dry, from medium and smaller bowls. Must say, I was eager to try this as a fan of natural tobaccos and a big hater of chemical aromatics so I jumped on this happy to get a naturally flavoured baccy. It was a disaster. I just cannot taste a pinch of oriental in this, it's harsh, unpleasant and the so- called whiskey flavour is only a heavy, sweet overwhelming something, very far from the lowest grade of consumer whiskeys. It was so bad I haven't finish any of the bowls - which happens to me only scarcely. Three times NO.