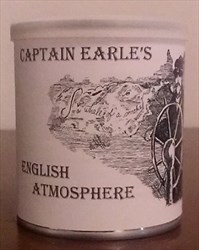 I first tried this tobacco maybe eight years ago, having purchased it directly from Hermit at a pipe show in Columbus, and have made a point of getting additional tins whenever I run into J. and Louise at our local pipe show. This is one of my all time favorites; delicious, cool burning, and a truly unique smoking experience. One might call this an English tobacco, given the generous portion of Latakia, but the addition of Cavendish gives this blend a sweetness not normally associated with the style, yet not quite like any aromatic blend you have tried. English Atmosphere is in a class by itself, it's disparate elements coming together to produce an unusual (in a good way), remarkable smoke.

ETA: As a bit of general history concerning Hermit blends, Jay and Louise Jones made a name for themselves selling their blends directly to smokers at the various pipe shows. They were always generous in encouraging folks to try their blends before they bought them, traveling with tubs of each of them available for sampling. Tins bought at the shows or from their website were of the smaller variety shown above, most containing two oblong pressed krumble kakes that called to mind those fire sticks you can buy from Campmor. Most of the old tins were clearly marked as being blended by Cornell & Diehl for Hermit Tobacco Works, but it wasn't until relatively recently that C&D began making them available for wider distribution. The squat tins containing one brownie-sized pressed kake are the more recent incarnation and are sold through most of the online retailers' sites.

English Atmosphere is the only one of the original Captain Earle's series that wasn't picked up. Stimulus Package and Diamondhead were both added after the fact. None of the holiday blends or others in the Vintage series are widely available, though a few remain listed as being in stock at the rather neglected pipestyle website, but I haven't tried contacting Louise to see if she still actually sells them (orders are by phone only). Jay's passing has put further developments from Hermit in doubt, and was a great loss to the pipe world.

English Atmosphere was a tobacco that took on a lot of characteristics of later C&D Krumble Kake classics. I found it to be similar to Black Frigate in a lot of ways, particularly the extra sweet taste of the heavily stoved Latakia. The Virginia, as was always the case with the original Hermit tobaccos, had a lot of Red and was sweet (naturally). Just a fine smoke, IMO.

I am not sure if this blend is still produced and my review is based on only a large sample, so take it for what it's worth. English Atmosphere is a flavorful "Englishish" with some additional sweetness that I am sure has been manually added, along with what I believe to be a touch of vanilla. In the true sense of we would call an "aromatic" in today's terms (rather than the true meaning of aromatic from days gone by) it's not bad. It is easy to pack and burns cleanly. The aroma is wonderful. The smoke was interesting for the first couple of bowls, but quickly became less interesting as I moved beyond that. Lovers of this old blend can find a very similar smoke in 4 Noggins' "Britt's Balkan," and I find Britt's to be a better blend.

I'm probably jumping the gun in reviewing this blend because I have only smoked it a few times recently, but I must say that so far I am quite impressed. Very smooth, although I would prefer a slightly more dominating Latakia taste. I was at first a little put off by what I thought was a note of Burley (I'm not, sadly, a fan of Burley) but am now inclined to think it was the Black Cavendish. Each smoke seems a little better to me, but the price ($10 for a 2oz tin) is too high in my estimation.

This is the tobacco equivalent of meth.

The more staid members of the piping set will be drawn in by the Latakia.

Those who like sweet casings and dessert blends will be suckered by the sweet aroma. Is it vanilla? Honey? It's hard to tell.

In any case, the time will eventually come when you break off a hunk from the pressed brick and crumble it into your bowl. This is another blend that gives off huge voluminous clouds of glorious love. However - big plus for us English blend fans - the sweet casing also carries into the aroma and doesn't send the girls and the squeamish immediately running for the door.

Being a Latakia, you can expect full rich flavor. It's not overbearingly steak-y, like you'd expect from Ten Russians, and that's not a bad thing. This is a medium blend, well suited for those social events when you want to be a bit more polite but aren't willing to utterly sacrifice the idea of actually tasting the tobacco.

Or, at least, you can tell yourself that if it helps you sleep at night. I love the stuff. =)