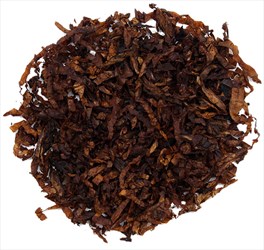 At last, the intriguing taste of Almond Liquor captured in a mild and mellow blend. Definitely, smokes cool.

The almond is more like amaretto, and mostly hides the cavendish style burley and Virginia, though the tobacco taste does show up here and there. When it does, you get a light nuts and earth, and a few blades of grass. Has almost no nicotine. Won't bite, but it is a sipping blend. It needs some dry time, and then will burn reasonably well with a fairly consistent flavor. It gets a little syrupy near the finish. Leaves some moisture in the bowl, and needs a few relights as it tends to burn a little wet. Has an okay after taste. More of an entry level aro, but it's also a pleasant enough all day or change of pace smoke.

I see this as a blend of two halves: nice tobaccos but bad topping.

The ribbons have a coarse build, are medium and light brown (more medium brown), they have a nice hydration, and a definite alcoholic aroma.

The Amaretto is a hearty addition from the start; it also ruins things. Although I get a nuttiness, I also notice an incisive, bitter, alcoholic flavour; too sharp, too cutting. On the positive side, this bitterness calms a little after half a bowl! The tobaccos, to be fair, have a nice flavour; the Burley outweighs the Virginia, so it isn't too fresh a flavour. Although the burn's good, even and not warm, it bites like mad; ouch!

J3? The bitter alcohol subconrads the smoke. So, I can say with imperturbability ''I don't recommend it'':

I'm with Sop - this one is not for pipe consumption.

The casing was certainly present in waves at the initial lighting (almond extract?) but burned off quickly and left one with a pipe loaded with sour mash burley.

The above descriptive is accurate, it is mild, mellow and cool burning.

Years ago I had been accustomed to smoking aromatics. I tried this blend and other Altadis tobaccos after taking up pipe smoking again. A number of these tobaccos suffered from the same affliction as this one. The casing had been horrible. After an initial pleasing flavor, Almondine went bland. There is not much more to say except, Altadis could do themselves a favor by taking this off the shelf and reworking it. This is not a good blend.

There has been a bright side to all of this. As a result of my aromatic experiences. I did a bit of research and looked more seriously at English and Virginia blends and never looked back. Occasionally, I will smoke an aromatic. More often than not it will be an aromatic that shows strong leanings towards and English or Virginian profile.

Just don't....don't do this to yourself. I only tried it because it came in a bomb/sampler/freebie package.

You've gotta love Altadis: their only consistancy is their very inconsistancy.

This one smells pretty decent in the pouch, very rich and the almond liquor really comes through. Smoking, however, is a different matter. Like the Wild Cherry they put out, the tobacco tastes faintly like...well, something. It's not quite almonds, but I wouldn't call it unpleasant. My girlfriend commented that the room note was "not bad," which is HUGE for her, because the pipe reminds her of her ex-husband. This is, in fact, the first time she hasn't turned her nose up at it.

I'm on the fence about Almondine. It's not bad, but it's just not much of anything. Needs to be smoked low and slow, or it will bite (which is typical of these blends anyway).

This is one of the first non-drugstore tobaccos I ever tried.I loved the taste and smell of this tobacco,but it doesnt keep its flavor.It taste horrible at the half bowl point.For that reason,I cant recommend this tobacco.

This is another sample that came to me. I love almonds but I did not get that flavor or aroma from this blend at all. To be honest, I liked the flavor I did get from it and enjoyed the aroma very much. Just does not live up to it's name so I can't rate it higher. It is a mottled, multicolor blend and with a very long shag cut. It is way too moist out of the pouch and somewhat sticky. It took a couple of lights and relights to smoke. Personally, though I liked the liquer flavor I found this to smoke really hot. Not for beginners at all. Not one of Altadis's better blends and will use it mixed with something else, maybe a chocolate and have a Mounds experience.

To be fair, I am a novice and this was one of the first aromatics I tried. I did not like the taste or room note of this blend at all. I wish I'd read the reviews before purchasing this. It seems overly smokey to me, with no discernable almond flavor in taste or smell. This one wasn't for me.

Well if you like to smoke chewing gum this is your blend... wet and sticky. It tastes ok but like other reviewers say the casing wears off and it taste ashy after that. Not my cup of tea.

pipe smoking has brought such pleasure into my life that I am reluctant to be severly critical of any product - after all, if it sells it must be giving some pleasure to someone.

Almondine came to me as part of a gift package of aromatics at Christmas. With all the affection for the gifter it has to be pointed out that the taste and smell of this concoction are synthetic. It is not really possible to recommend it to anyone: there are so many delightful aromatics around.

A friend told me about an online promotion where Altadis sent out samples of its products so I gave them my personal information to exploit. Two weeks later a box of about 15 blends, one to two ounces each arrived.

All but one or two of the tobaccos were aromatic but almondine had the best aroma. Maybe the best pouch aroma I have ever experienced. I wanted to eat it.

The tobacco was moist and burned poorly. Once dried it burned okay but was still a five plus match affair. The flavor was a blast of sugar and the almond did not really come through. The sweetness burned away after ten minutes. The make up was removed from the flavorless, cheap tobaccos. At this point the tobacco is not even worth smoking. I finished a few bowls on principle but it was a bad experience. If altadis is still running the free tobacco promotion maybe this is worth trying as chaw while fishing, but it is not worth gunking up a pipe for ten minutes of sweetness.

Almondine was a huge disappointment. The aroma in the pouch did not prepare me for the burning tobacco. It was mild, but had a strange aftertaste. I tried Almondine twice, both times a quarter bowl was all I could handle.

This blend starts out nice enough. It packs well. It isn't too sticky and wet. It burns well. The almond liqueur is pleasant enough. The problem is, the base tobaccoes just don't hold up. Once the casing burns off (as it inevitably does) you are left with some rough, ashy tasting tobacco. For me this happened about a quarter of the way down the bowl. It does smoke cool and didn't bite me. But the taste once the casing was gone really put me off. Consequently, I can't recommend it.

Not the best effort from the Sutliff stable by any means. Smells like a winner in the bag and in the first half of the bowl more or less. Goes from a sweet aromatic to a common VaBur in the end. When I finish these 4 ounces I will not likely re order. This for me is a hay cutting or weed eating smoke.

Age When Smoked: New to 6 months

I picked this up as one of my first pipe tobacco purchases only a few months ago. The aroma of the opened pouch was wonderful. Filling the bowl was easy enough but lighting it was less than desirable as I wasn't patient enough to let the pouch dry out a little before trying. After lighting, the first third of the bowl was pleasant enough with a hint of almond and perhaps vanilla. After that what flavoring was there had left the bowl and the tobacco had strengthened. By the end of the smoke I was left with a flavorless tobacco that became quite dull. However, the room note that was left was quite pleasant. Enough so that my wife(who doesn't mind at all if I smoke indoors!) complimented it greatly. The room note also increases greatly if smoked inside a car leaving a more than welcomed toasted marshmallow aroma. It did improve a little when it had been dried out to my liking, but I can only recommend this aromatic if one is looking for a good room note only. I give this two stars on account of its wonderful room note.

Pouch smell is great, but when you put it into a glass jar it just gets nice and heady/boozy smelling. But a few puffs after you get it burnign in your pipe the sweetness you recieved descends into a mellow blandness.

Did have an amaretto, not almond, taste and smell when smoking it, and the bowl did reek of amaretto when cooled down. Just not worth the time to me anymore.

Like Frangelico you can smoke, sort of...an after-dinner cordial/liqueur type thing that will make those around you (those who aren't anti-smoking sheep) swoon with delight.

They'll tell you how wonderful it smells and you'll smile and then tap the stuff out as soon as the casing burns off which, like chewing all of the sugar out of a stick of cheap bubble gum, occurs all too quickly.

No cathedral to the noble leaf here. Yes it gurggles, yes it'll burn you if you let it, and yes it is very sweet, but the casing is decently executed (though somewhat synthetic at times) and you certainly get what you pay for at this price.

Picked up a pouch on sale while traveling. After reading reviews of it, I wasn't very optimistic about my purchase.

I agree with other reviewers that the pouch smell is very nice. It wasn't too goopy with PG when I opened it to aerate the shag. Loaded nicely and packed well. Lighting took some coaxing, but once lit it was good on its own. Burned hot, but very little bite.

There was a mild PG flavor upon lighting, but then nothing until I got half way down the bowl. Once I got there, suddenly there was flavor to the smoke. I'd call it a subtle, earthy sweetness. Room note was pleasant throughout the bowl and it finished without a huge nicotine hit and no dottle to speak of.

Not even close to unseating my top three, but definitely not a waste of $4.

Its worth a try, its advertised as an aromatic how ever it had more of a smokey taste nothing like stated on the package. The brand is fair priced and i like other blends of theirs, i guess this one just wasnt for me.