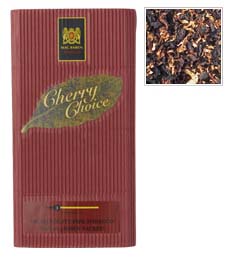 A fantastic blend of the finest Virginia, a superb burley and cavendish. On the top of the blend we have carefully added a special cherry aroma and some very fine Jamaica rum. In combination, the top flavor and the tobaccos give you a pleasant and gentle aromatic smoke.

Notes: Known as Supreme Choice outside of the USA.

Having tried and very much enjoyed Original and Aromatic choices in the series, I had inflated expectations of this one. But I'll try to list pluses and minuses fairly.

Out of the pack it smells like ice-cream or pudding cherry powder, tasty, but not exactly real cherry smell. Surly pleasant, not repulsively chemical.

Smokes evenly with no bite, not bitter, not nearly as sweet as other choice series. Cherry is present very mildly and I sense a bit of cream, just a touch of sour, cavendish comes through a bit. Tastes consistently through all the smoke without killing you with flavouring or bitterness, but it is not nearly as intense as original or aromatic choices. Cool smoke, no bite, even burn, nice grey ash.

Compared to other aromatics, this one is less sweet, less chemical, a bit bland, smokes cool. It's an ok smoke, but Mac Baren has much better stuff in the range. Go for it if you want mild, non-distracting aromatic.

Purchased From: some guy in Istanbul

Similar Blends: other choice series in terms of how it smokes, but not the flavour., Mac Baren - Vanilla Choice.

The least of the Mac Baren mixtures I have tried. They can produce very good aromatics, but cherry flavour is a problem. The only successful use of cherry flavour is Larsen`s Classic - but that is because there is just the barest hint of the flavour, more an appeal to the imagination than to the senses.

Very cautiously recommended, to lovers of cherry aromatics only.

This tobacco was my second and I found it to be much better than my first aromatic. The flavouring was very evident from opening the pack and remained almost throughout the smoke. It burnt well and stayed lit throughout. It wont appeal to nicotine addicts but for a pleasurable smoke I cant personally fault it.

Cherry (BAD) Choice Very spicy, very hot on tongue, very sweet, just plain FIRE in the mouth, I just burn my tongue, this HURTS!, bad experience. Maybe this is not so bad for cherry lovers, I am not

I smoked this under the Cherry Flake moniker from pipesandcigars.com. I'm not sure I really go for cherry blends but this one was different. The flavoring was not like red gummy bears, cough syrup, jolly ranchers, etc., but more like sour Michigan cherries. Not that the blend was sour, more that the blend is not overwhelmingly sweet. The tobacco flavor comes through in an understated viginia sort of way. The cherry flavor in and out 'till about half way, then almost totally dissapears. It is a good blend to try if you like danish style tobaks, or are smoking stuff from walgreens and are getting tired of that. I like this alot, dispite the tounge bite...SMOKE SLOWLY!!!! 7 of 10 (because it smokes hot, otherwise an 8)

Age When Smoked: no idea

After consuming a package of this -to be honest the cherry flavor was so repelling- I completely went an other direction away from aromatics. I remeber thinking yet another flavored tobacco by Mac Baren when I bought it, but there is something I didn't like in it. I am not a fan of aromatics but I smoke them now and then, and I know for sure, I wouldn't want to smoke this one again.

I was expecting maybe a little too much from this blend. The pouch aromas is strong with cherry flavor. It's like diving in a syrup almost.

I didn't want to get too influenced by other reviews and tried my best to go at it as neutral as possible.

The packing was easy, the charring as well. It gave a faint but nice smell to the room. As for the taste, well, I was disappointed. It didn't taste at all as it smells. As I am still very new at the pipe hobby I don't want to try and use fancy word and can only say this... I didn't like it.

As I did for other tobaccos I tried before and didn't like at the first bowl, I'll give it another shot in another pipe later and see if anything changed in my taste.

It is always a gamble trying to find a good cherry flavored tobacco. Cherry flavored pipe tobacco is highly sought after beginner pipe smokers. And Mac Baren being one of the most available pipe tobacco in the world, beginners may have had an acquaintance with this, like me. Since this is sold as an aromatic, I will only comment on its aroma. It sucks. The smell is so vulgar and has nothing to do with cherry. The aroma could not be more synthetic. Even Captain Black's cherry is better than this one...

Well it smells like cherries, first light taste like cherries, third puff though not so much. It just keeps getting worst as you smoke it. The only reason I'm giving it 2 stars is because it doesn't bite, and I have tried a lot worst than this.

Very unstable quality: for three times I tried to smoke it, only once mixture was in good state with acceptable humidity and burned cool. Two other times tobacco was very wet, and after small drying it lost most of its flavoring, burned hot and constantly tried to extinguish.

If you're dying for aromatics, maybe you can smoke.

This tobacco produces a nice smell, but sensed mostly by the nearby people and just little by the smoker. After several times the smell begins to annoy as the most artificaly flawored blends. Produces a lot of tar.

The second tobacco I put in my pipe after a 7 year hiatus.

Stay away from it.

09/19/2005 This mixture consists of a lot of ribbon and coarse-cut cherry Burley and Cavendish Aromatics with a bit(about 10-15%)of broken (Virginia?) Flake added. It is quite tasty and more the Danish style rather than American. However, I am convinced there is no way to make a Cherry flavored tobacco without it being a biter. I am going with four stars in spite of this attribute as it is the best Cherry blend I have encountered so far. As far as I know this can only be purchased from http://www.pipesandcigars.com. Update- 11/05/2006: Down-rated due to tongue-bite issues. If you can smoke most MacB's blends safely and enjoy Cherry flavored real tobacco I recommend it. If you have a tender tongue steer clear.

Reading the description of this blend provided by Mac Baren it was difficult to believe they were describing the tobacco in the bowl of my pipe. Whether it be from the Virginias, or simply the fact that this blends burns very hot, it will bite, so take it easy. The bite was enough for me give this blend a low recommendation, but after the first few puffs during lighting, one can detect a faintly sweet taste of cherry, but after the furnace is fully lit, the smoke takes on a very harsh taste that lasts clear to the bottom of the bowl.

I could be that I haven't tried the right Mac Baren aromatic, but this is third one, and by far the worst of the 3. At least the other 2 didn't burn so hot that it made it difficult to hold on to the bowl. Even though cherry flavored aromatics are not one of my favorites, I've smoked some (Lane and Altadis) that are far superior. There are some that may find this blend to their liking, but I simply can't recommend it.

When you open a pouch you get nice but faint cherry smell. This tobacco burns very well. Good for beginners because it's hard to get tongue bite. Cherry flavour is almost nonexistent and rum flavour isn't present during the smoke at all, as aromatic tobacco fan I was disappointed.

I recommend it if you are a pipe beginner and try to smoke aromatic tobacco. It is cheap and good smelling when you open the pack.

Just enough cherry flavor when you first open the pouch - but it soon fades away. If you like a very lean, light smoke this might be for you. Ladies in the room are not likely to get offended, Mix it with something more body to get a fuller smoke.

Age When Smoked: Fresh to a week old

Reading these reviews and perhaps I'll get amps from somebody,but I like once in awhile mild aromatic morning smoke.I usually smoke less aromatic blends or semi-aromatics.I prefer as the blokes call it over the pond English blends.So got tin from a mate of mine as gift.The tin smell is not so rewarding...sour cherries...got my doubt about it, but when I smoked with Cobb after second lite got this mild cherry aroma which lasted over the half of the bowl.I did not get same results with my Savinelli Smooth Short but It wasen't bad bowl neither.Good for a morning puff or for the beginners.Before I forget let it stand on paper about 15 minutes before you pack your pipe...at least tobacco in my tin was little bit too moist.I wouldn't smoke it every day,so if you like mild blend with good burning quality and cherries try it.

Very mild, only a hint of cherry (more might be problematic), can be smoked very slowly - stays lit very well. When smoked gently almost lacking bite. Not a great smoke but will do for a break between full flavors.

i liked everything about this tobacco except from the bites, the taste is pretty good a mild cherry not overwhelming artificial cherry and the strength level is satisfactory but again this blend bites like hell no matter how slow u'll smoke it