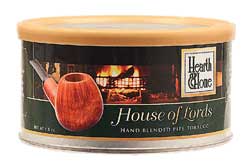 Three distinct Virginias lend spice, sweetness and a unique spirits-like taste, which is balanced out by fragrant Turkish tobacco, and plenty of rich, woodsy Latakia. Plenty of taste, a bright bouquet, and voluminous clouds of smoke reward the smoker looking for a rich experience.

Another fine English blend from Russ O. Reminds me of the Dunhill bulk offerings we had in the 70's. As much as I like Admiralty I like this one even better as it is a little fuller in taste. Packs and burns well. If you are an English fan, here you go.

The Cyprian latakia is smoky, woody sweet and is the star that the other components play off of. The Virginias are grassy with a little citrus in a support role. The Oriental/Turkish is woody, buttery sweet, slightly dry with a mild hint of spice that isn't always evident as a third player. The nic-hit is just past mild. Won't bite or get harsh. Burns clean and cool at a moderate pace with some creaminess. Leaves just a little moisture in the bowl, but no dottle, and requires an average number of relights. It has a nice start, but the flavors muddle a little in the last third of the bowl, and makes the mixture less complex than it was. Even still, it's a decent starter English blend.

I found this tobacco on first bowl to be a blend of thirds. The first third was fairly nice, with Virginias and orientals in the front. The second third was overpoweringly spicy, with the perique and latakia in an unholy alliance. The bottom was a disappointment, just a muddy latakia dump with no other flavors. At the least, more interesting than some one note blends, but there are many blends that develop where each third has some positive redeeming characteristic... I only liked the first third.

This blend is lightly darker than the Admiralty, but still much lighter in colour than Armada or Ten to Midnight. It's another classic English mixture, a little less balanced and smooth than the Admiralty but still belonging to the tradition; the Virginias here are darker and the latakia is more present, giving the blend a fuller spicy flavour. A great afternoon blend.

A relatively mild English style smoke. Very tasty. I generally prefer somewhat stronger English styles, such as Dunhill's 965 and Perfection. My tin came slightly on the dry side, ready to smoke, but probably needs to be humidified shortly. When I'm looking for a milder English, this is a good one. I give 965 and Perfection 4's, and House of Lords gets a 3.

House of Lords begins by showcasing the Orientals, (Smyna maybe??) and as described, seems to produce a large volume of smoke. HOL for the most part thought is a fairly pedestrian blend. Yes, it’s a good tobacco, but undistinguished, especially considering the many and often very good English blends made by Russ Ouellette. For me, the spice shows up about mid-bowl and remains till the end of the bowl. It isn’t overly spicy, but just enough to let me know that it’s there. The Virginia tobaccos don’t offer much in the way of sweetness. There is an ample amount of Latakia in HOL that seems to kick in about the same time the smoke offers some spice. I am not sure when Russ developed this, but my guess is that it was earlier on in his blending career as it isn’t as complex as some of his later blends. I have smoked it new and with about 3 years of age on it, and while there are some changes, they are not drastic by any means. House of Lords is a solid, straightforward English blend. It just isn’t memorable.

Age When Smoked: New and up to 3 years

I found this sour, bite-y, with too much perique (I am over-sensitive to perique, I think, so bear that in mind if you will) or something that makes me think there's too much perique. Latakia is there, sure, and so are Virginias. The flavors didn't seem to want to be with each other, though. If someone wanted to try an English blend, I wouldn't recommend they start with this one.

This has become my "dog-walking, don't want to have to fiddle about with my pipe because my dog is a highly strung eejit and demands all my attention" tobacco. It has a nice balance to it. Not as smoky and beefy as some of the English blends that go a bit heavier on the Latakia, but it strikes a nice balance. Packs easily, burns evenly and leaves no dottle, just fine white ash. Nice job again Russ! (and a great price point too!!)

This is another good medium English blend by Russ. It is not as well balanced as Daybreak, which is my favorite of his blends - so far. This one is a little darker in color than Daybreak, has a smokier flavor due to the larger amount of Latakia, and tastes similar to smoked jerky or pemmican. It goes well with tea, beer, coffee, scotch, etc. If you are a Latakia fan, this should please your palate! It burns slow, produces some thick, rich clouds of smoke, and smokes great in any pipe. If you are just beginning to sample English blends, this is a good introduction to them; not as good as Daybreak, but still good!

I Was Recently Given About 4 Ounces On This Tobacco From A Fellow Pipe Smoker (Who Found It Too Mild For His Taste), And Here Are My Opinions:

Overall, A Very Mild Tobacco, But Something Seemed To Be Lacking.

It Seemed A Little Flat In The "Middle"...Something Just Didn't Feel Right.

As An Experiment, I Proceded To Take 2 Ounces Of The Tobacco, And I Added 1/2 An Ounce Of Perique, Just To See If It Would Round It Out Better.

After Some Trials By Myself And Other Pipe Smokers (Including The Gentleman Who Gifted Me The Tobacco In The First Place), We Decided That The Perique Cooled The Smoke, And Filled The "Missing" Parts Quite Nicely.

Yet another solid choice from Russ Oulette. Like most pipesandcigars.com blends, House of Lords comes dry and ready to smoke - no preparatory drying like some boutique brands(GLP). The Virginias are bright, clean, zesty, and spicy, but can be a bit nippy if allowed to get too hot. I particularly like the Oriental leaf in House of Lords, as it has a really nice taste in the nose. Typical of Oulette blends, House of Lords has good burning qualities that are so important to me. A solid three star, medium English and a great value.

I thought I would like this blend much more than I did since Russ Oulette has quite a nice blending touch. I could not find anything distinct in the blend, save a somewhat bitter taste. It also just seemed just a little harsh to me. Too many better 3 and 4 star English blends out there.

House of Lords is a very nice tobacco. It burns well, it tastes good and it doesn't bite. I can certainly see it being an experienced pipe smoker's all day smoke or even desert island blend. It is a wonderful example of a traditional medium-strength English blend.

Having said those things, however, it must also be said that, as has been noted, there is a lot of competition in this arena, and what it comes down to is a matter of taste.

My own personal favorite in this competition is Dunhill's London Mixture. Others have mentioned Squadron Leader, and I'm sure that Penzance has its adherents as well.

Though I enjoy this blend, House of Lords just doesn't distinguish itself enough to warrent my switching away from London Mixture.

This is a blend which I can enjoy anytime, place, or mood. To me, it is quite similar to Squadron Leader (SL), but it produces thicker, richer smoke for me than SL, and I like that. For reference, SL is my favorite "general-purpose" smoke. This is a solid, no-nonsense, medium English. This blend looks good, packs good, and stays lit all the way to the bottom of the bowl. It is very easy to smoke, which I like. And given the reasonable pricing of this blend, dollar for dollar it is as good of a value as any tobacco in this category, and better than most. I always find merit in any blend from Russ Oulette, and I would say House of Lords is my favorite smoke from him. You know, if it had the history and tradition that Squadron Leader does, there are times when I think I actually prefer this to SL. Maybe I'd better kick back and do a bit more "research"....

HoL is so smooth, so rounded, so deep, and there's so much there, and yet it's even-tempered and patient. The components are quality and well-blended, but there's something else here that's truly outstanding: The way these components are joined so perfectly without any disharmonious transitions, without any harshness from top to bottom of the bowl, is truly unusual for this type of blend (in my limited experience).

I've been smoking House of Lords to the exclusion of the other blends in my cabinet for almost two weeks now, and I've developed quite a liking for it. It's an inviting mixture on presentation with its bright-gold-and black colors in the forefront and a latakia aroma that's more suggestive of hardwood smoke, as opposed to the more tarry aroma of some blends. The turkish, virginia, and latakia tastes are well balanced and smooth, not too rich. House of Lords goes well anytime of day.

My impression overall is that while there isn't anything that makes House of Lords stand out in the crowd, there isn't anything it does badly either. It's just a good, steady everyday non-aromatic, a fine interpretation of a classic English formula. Definitely recommended.

Similar to Squadron Leader in strength with less Turkish component. Caution: If you don't like occasional blasts of Latakia, break up the bigger chunks before loading your pipe. A fine medium English but there is a lot of competition in this class.